This week I’m sharing an old (ish – 11 years) photo of someone very old. My Nana. Like all the old (that’s pre-2009 to me) photos I post on here, I just took a photo of the print with my digital camera as my scanner isn’t working. Sometimes I even do that with post-digital ones because it drives me mad trying to find the right disc. No, before you ask, they’re not filed and organised in a logical order.

Anyway, my Nana was my Dad’s mum and I’ve never blogged about her before. This is her meeting my eldest son, her second great-grandchild, back in 2001. She went on to have six great-grandchildren before she died – with me very generously providing 50% of them. 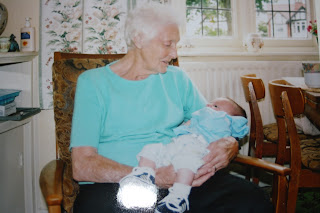 Nana was a proud lady. I didn’t know her quite as well as I knew my other grandparents. Her husband, my Grandad who died when I was 3, was the mayor and a prominent councillor. There were some lovely photos of my Nana in her heyday dressed up as the mayoress.

My Nana was born in 1914, the youngest of four children. Nana grew up on a farm and her two brothers were farmers until they died. My Grandad was a milkman with his own business and my dad and his brothers used to deliver milk. In the war, my Grandad was a fireman.

My Nana had four sons and she loved boys. Her house was always crammed with food as if she still had four grown men living with her. Between them, her sons produced four grandaughters and two grandsons – with my Dad putting in the majority of the work!

My Nana was tall and elegant and she always had white, curly hair – even well before I was born.

For as long as I could remember, she was troubled by a bad leg. She had hip replacement after hip replacement, but things always went wrong. Her mobility was poor for a really long time. Even when I was 18, I remember her struggling to get up the small step into my mum and dad’s front door. In later years, she was forced to use a wheelchair when she left the house, which she hated. It didn’t fit with the image of the proud mayoress, so she rarely left the house.

She grew forgetful. She probably should have gone into a care home, but she would have hated it. She was happy in her house which was a bit too big for her, surrounded by a lifetime of memories. So she had a full-time live-in care assistant in her final months.

I wanted to share a photo of her meeting my daughter instead, but I couldn’t find it. I think the photo I had in mind was one of my Dad’s rather than one of mine. The photo wasn’t as old, but she was older. It was the last time we saw her before she died. She was also the only one of my grandparents to meet my daughter. You can read about Granny and Grandad here. They knew both my boys, but died before my daughter was born. Grandad at least knew I was expecting her.

Six years ago, the troublesome leg got infected. There was nothing that could be done. She had it amputated. She went back home, but she didn’t last long.

My Nana died in February 2007, at the age of 92. She’d outlived all her siblings and in-laws and survived far longer than anyone could ever have imagined. But she’d been strong and a fighter and determined. She’d carried on for as long as she possibly could.

This post was written in response to The Gallery prompt at Sticky Fingers.