My beautiful baby boy is very nearly 9 years old. I know we always say it, but where did that time go? How did he get so big?

He is and always has been a very easy child. After he was born, he basically slept for 12 weeks. Then he opened his eyes and started smiling and has never really stopped. He doesn’t challenge me in the way the other two can. He isn’t demanding. 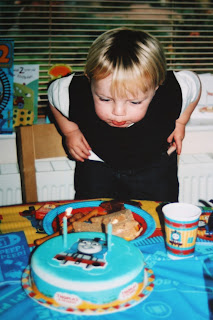 Here he is on his 2nd birthday – he was so cute

He loves football. He loves playing it, watching it, analysing and reading about it. He loves playing rugby and he loves the Wii and DS. He loves reading Beast Quest books and building Lego. He’s a typical boy and is passionate about the the things he enjoys.

He is a high flier at school. He sits patiently while the teacher asks four or five other kids the answer before saying in a resigned voice, ‘Go on, B2, tell them’. He’s in year 4 and this has been happening for his entire school career. The other day he worked out the answer to a complicated sum in assembly. The headteacher hadn’t even said it was a question, but my son sat and worked out the answer anyway. At the end he was the only one who put his hand up, despite the fact that are are two more year groups, or 120 kids, above him. He got it right. The headteacher knew it would be him. The teachers and TAs were in awe, even those who know him.

But the best thing about him is he is loving and caring. He’s not keen on kisses, but he likes nothing more than to jump up on me, wrap his legs round me and for me to carry him round. I have no idea how I still manage it because he is so big. When he’s excited, he picks me up. Yes, he’s an 8 year old boy who can easily pick his Mummy up.

He loves his Daddy and his brother and sister. He’s the only one of our kids that really loves both his siblings.

He won’t hug my mum and dad – in fact, he will run away from hugs and kisses from them. But he always asks when they are coming round and misses them if he doesn’t see them for a day or two. When he says ‘I like it when Grandma comes round’ it is so sweet. Grandma doesn’t spoil him to buy his affection. He just genuinely likes to see her.

The truth is, my boy was always big and he was always grown up. Now he’s 9 I suppose it’s right that he should be big and grown up. He’s a tween now, so we’ve got two in the house.

At 9, boys reach three quarters of their adult height. He is going to be a BIG man. He and his brother have always been close in size, close in ability, close in everything. There’s two years and four months, and three school years, between them, but the clothes pass straight from one wardrobe to the other. By the time my eldest has grown out of them, my younger boy is straight into them.

He’s not perfect, he has his downsides. He is certainly the most untidy of the kids. Everywhere he goes, he leaves a trail of clothing, sports kit, Wii controllers, books and paper. But if that’s all I’ve got to moan about, I will take it. You can learn to be tidy. You can’t learn to be kind or loving or clever.

My boy has given me nine amazing years. In another nine he will be an adult. Now that’s a scary thought. 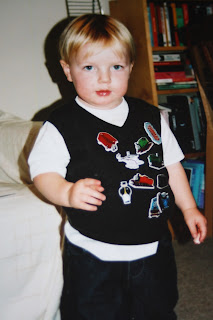 And here he is age 2 again. In many ways, he hasn’t changed much.