My son has done half a term at secondary school now, so has anything changed? Of course it has. Secondary school is all about image and anyone who tells you otherwise is either very deluded or very, VERY lucky.

A couple of months ago, I asked my son to get some Tshirts ready for going away (I can’t remember where we were going). He took out the WORST two Tshirts in his collection – the two that should have been chucked out years ago. They are a Scout Tshirt commemorating a camp he went over two years ago with a rather tacky hand drawn logo and slogan and a Gap Tshirt age 8-9 (he’s 11) with a picture of a tent on the front and the slogan ‘Camping is in tents’. Yes, my boy likes camping and Scouts and stuff, but these Tshirts were NOT going anywhere.

‘Not those! They’re terrible.’

Hmm, I thought. I wonder how long they will be cool for… Somehow I suspected they wouldn’t be cool for that much longer. (As an aside, they are still SCOUT COOL. At Scouts, things that prove you’ve been on lots of camps or you went on camps a really long time ago are cool. But what goes on Scouts stays on Scouts. They are Scout cool, they are not school cool or any other type of cool.)

Before my boy left primary school, people thought his long hair was cool read about his hair here Other people said he had ‘curtains’. But he didn’t have a problem with this. He had his hair cut, he started secondary school, he learned that curtains were NOT COOL.

Nine weeks after the initial cut, the hair needed doing again. Unfortunately some people at school had said it was cool. He didn’t want it cut. Tough. It was cut. He is now brushing it forward to avoid ‘curtains’. It looks ridiculous and it doesn’t look like curtains when it’s brushed normally anyway.

We bought him a mobile phone for his 11th birthday read about that here The offer of a £30 or £40 phone was on the table, but he opted for one for a tenner (which he lost and it was replaced with a £12 one, but that’s a whole other story about kids and carelessness and thinking New Stuff grows on trees). As you can imagine, the phone is pretty naff. But he was happy with it.

Then he came home from Scouts last week to ask if he could buy a Blackberry off an old friend for £20. A Blackberry? What does he need a Blackberry for?

‘Because Blackberrys are cool.’

My husband secured an old, immaculate Blackberry from a colleague without parting with £20. Or any money at all. So now he has a Blackberry. It’s just for show. The contract is all wrong for him to use the internet (thank goodness). 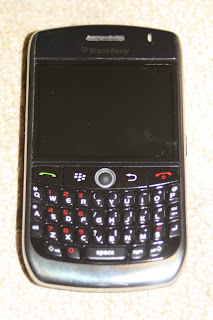 So his hair’s cool, his phone’s cool. What about his clothes?

A few months back we bought him some Reebok trainers. FOR SPORT. I’ll be honest, I can’t bear Reebok trainers. And he started wearing the damn trainers for every day use. They are truly hideous. Just before half term I cracked. The trainers had to go. He couldn’t see it himself. He still harboured the belief that they were cool. They were so not cool. So we went to good old Sports Direct. OK, it’s not that good but it serves a purpose and we got some perfectly cool Airwalk trainers for less than £20. Result! 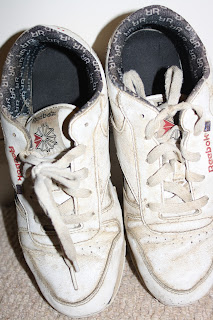 His jeans and Tshirt collection was looking decidedly ropey and worn out, so we went to Next to replace them. He’s not keen on shopping, to say the least, which is why we don’t normally bother taking him. Next didn’t really have jeans in, but they did have those cool trousers ‘all the young men are wearing’ (I sound so much like my Granny). I don’t what they’re called because I’m quite old, so I’m hereby christening them OneDirection Trousers. They’re the sort which are baggy round the crotch and tight round the ankles. They are cool.

Shock, horror, he like the OneDirection Trousers. He chose a couple of poloshirts too. We were a little bit restricted by what Next had available in an age 12 because they didn’t seem to stock much over an age 8.

He put on his OneDirection Trousers with his polo shirt and his skater trainers and he was someone else! He wasn’t a little boy any more, he was a young man. And he looked pretty cool. He looked in the mirror and I know he was pleased with what he saw – you could see it running through his mind (I can read my boys like a book). The cool boy in the cool trousers and the cool top with the cool trainers, the cool hair that most definitely isn’t curtains and the Blackberry.

Six weeks in and my boy has become image conscious.