We moved into our house when our boys were 3 and a half and 14 months. It was so long ago, my younger son wasn’t even walking (he waited another nine days!) and my daughter wasn’t even a twinkle in the eye. We met our neighbours, who are still our good friends today. Their daughter, who is a year older than my eldest had POCKET MONEY.

Impressed, we decided to give my son pocket money. We gave him £2 a week. None for his little brother – or for his sister when she came into the world. They had to wait until they were 4.

Fast forward eight years and they were still getting £2 pocket money. I know inflation is a bit crap these days, but they should definitely have had a rise. And my son’s at secondary school now. He probably needed a bit more money.

So how much to give him? And what about the other two?

Average pocket money for a child in Britain is now a whopping £6.25.

Jumping to £5 a week seemed a bit much, but £3 didn’t seem quite enough. So we went for £4 for my eldest and decided to give the younger two £3 a week.

In the past, this has been handed to them on a plate. But, no more! We are now awarding performance related pay.

Our kids are pretty good, but there are one or two niggles. They’ve struggled to settle back into the routine of school – getting into the house and doing their homework. They walk into the house and think it’s time to watch The Simpsons or play on the Wii. With the amount of outside activities they do, homework time is limited and they need to make the best use of it when they’re at home.

So they get £1 a week for homework. They can be docked 20p a day for things like forgetting their reading books.

Then there’s the bedrooms. My daughter’s is a sort of organised chaos. She thinks it’s tidy and she actually makes an effort to put things away – but to her putting things away is just putting them in a big pile on her desk.

The boys’ room is a completely different matter. It is NEVER tidy. I hadn’t been in for weeks with the hoover – the floor has been invisible. There are drawers hanging out and overflowing. The shelves are full of crap, so the books have to go on the floor. Things come out to be played with, read or drawn on and get left in the middle of the floor. I honestly thought it would never be tidy. Certainly it was way beyond my capabilities (which are somewhat limited). It was like an impossible puzzle with no solution. 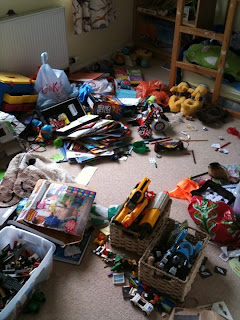 So they would all get a £1 a week for a tidy bedroom. My eldest (who is not the main cause of the mess, but nor is he an angel) declared this to be not fair because he wouldn’t get pocket money due to his brother. My younger son said it wasn’t fair because he couldn’t tidy the bedroom.

But then he started. He cleared the drawers and shut them. He picked up some pens and books. The floor was getting a bit more visible. He didn’t finish, but, significantly, he didn’t mess it up again either. He went back the next day and the next. And he tidied. He did it pretty quickly in the end.

A miracle has occurred. The carpet is back. The shelves are still messy, but the floor is clear. You can sit on it, play on it and even hoover it.

We are all in awe. He did this for £1 a week. If only we’d known, we’d have increased the pocket money a very long time ago. My eldest, not known for his generosity, even gave his brother the ‘bedroom tidying’ element of his pocket money last week because he was so pleased.

My kids, like many kids, are quite partial to money, but I never would have guessed such a small financial incentive could make such a big difference.