Getting to know me

Home » Getting to know me

I have asked by the lovely Sonya Cisco to tell everyone a bit more about me. Nosy cow! I can’t imagine there’s much I haven’t shared to be honest – from my chocaholic ways, ocassional parenting fails, claustrophobia, birth stories and IBS – you’ve heard it all!

But because Sonya is a fab blogger, I will tell you just a little bit more about myself.

When was the last time you cried?

Yesterday, when I heard Bruno Mars’ Count on Me. The school choir sang it at my son’s leavers’ assembly and I was a blubbering wreck. The sound of children singing always makes me emotional, but add that to the words of the song which were so appropriate and the fact that my son was leaving primary school, I was a mess! I heard it again for the first time yesterday and I cried.

I actually love a good cry and probably cry several times a week about books, television programmes and films.

Are you named after anyone?

No. I was going to be Sally right until I was born, but there was a girl over the road called Sally and my mum decided I couldn’t have the same name, so she decided on Sarah. Sally is actually a derivative of Sarah. I always thought I’d be a completely different person if I was a Sally – Sally sounds a much more fun, flighty name. Sarah is pretty serious. As well as being ridiculously popular for women of my age.

Do you have kids?

If you were another person, would you be a friend to yourself?

I hope so, but I’d have to stick around for long enough to bypass the boring bit and hopefully I would like the real me that came out in the end. The fun me who thinks before she speaks and makes people laugh. Sometimes even intentionally.

Do you use sarcasm a lot?

All the time. It’s the lowest form of wit, but also the funniest. There are days when I am sarcastic non-stop. I don’t do it with the kids though or people who don’t know me well. I know I’ve made a good friend when I feel ready to cross the sarcasm boundary.

Will you ever bungee jump?

No way! I’ve been very risk-averse since I had kids. My main goal in life is to keep my kids alive, followed closely by keeping myself alive. I won’t be much use to them if I die in a snapped-bungee incident.

I’ve written a whole post on this one! It wouldn’t be my first choice, but I eat Rice Krispies with various other bits and pieces because it’s good for me and my poor IBS.

What is your eye colour?

Blue. But not VERY blue. A greenish blue.

The seaside or freshly cut grass.

Summer! The only good thing about winter is that it eventually ends.

What’s the furthest you’ve ever been from home?

Thailand, on honeymoon. It was lovely, but I felt slightly anxious at being that far away. Even then, I knew I would probably never go that far from home again. 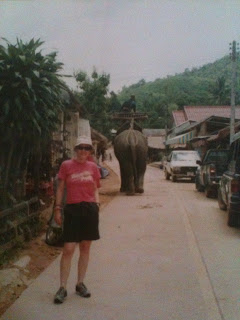 Where were you born?

Do you have any special talents?

Nothing in particular. I’m pretty good at reading out loud and have kept classes of 6 year olds in stitches with my funny voices.

My dance teacher also said I am the ‘best freestyler’ she knows. Basically, I’m good at making up dance moves. That is one of the best things anyone has ever said. I love dancing – and my ACTUAL DANCE TEACHER said that. Awesome.

What are your hobbies?

Do you have any pets?

We recently had three fish that survived 16 whole days. From the age of 9 right until 31 I always had a rabbit. I love rabbits and will have another one at some point. For a few special days we had a caterpillar who broke all of our hearts

Not sure. I like going to the cinema, but I’m not a massive film fan. As a teenager it was Rain Man (‘drive slow on the driveway’), as a young adult it was good old Trainspotting and Pulp Fiction. More recently I’ve enjoyed the Swedish version of The Girl with the Dragon Tattoo and The Help.

Do you have any siblings?

So that’s all about me!

Now to ask the same questions to: