I’m one of those people that likes to be organised and prepared. I NEVER travel light. My handbag is the size of a small country.

I carry suncream (an adult one and a children’s one) from the end of March to the end of September. I carry tissues and baby wipes, I carry plasters, Calpol, Piriton, Rennies and sting relief. I am an obsessive hoarder, and carrier of, antibacterial hand gel (or ‘squirty’ as we call it in our house). I have Vaseline and sunglasses, an umbrella and a notebook and a couple of pens. Not to mention the obligatory purse, keys and phone (which I am always mis-placing, can you imagine what amusing TV talent show tune my kids keep singing to me?!).

When we go on holiday, or even out for the day, I am prepared for ALL weathers. We need waterproofs and sunhats, fleeces and shorts.

I always insist on carrying large quantities of drinks, partly because of my kids’ fussiness read more about that in this recent post but also because I resent the prices you pay when you are out. If you can buy six bottles of water for £1.40 in the supermarket, why would you pay more than that for one? OK, so it does get rather heavy and tiring. And I usually have my not-light-at-all camera with me.

You get the picture.

But now I’m under pressure. I have to change my ways. Fast. I have to work out what we REALLY need.

We’re going to the Paralympics! Hooray! I am so excited. I was despairing and thinking I would never get to experience the Olympic Park and then FINALLY I managed to get some tickets. For the Athletics, my absolute number one choice.

But the Olympic Park comes with rules attached. You are allowed one small bag per person. You are not allowed more than 100ml of liquids. OK, so that’s just about do-able, we’re in the park for less than a day after all. But then it gets REALLY challenging.

Because we’re going there on the train, we’re staying over the night before and checking out before the event. We will have no car and no hotel room in which to leave excess toiletries and clothing. Everything I take on that train and into that hotel room, I will also be taking into the Olympic Park.

What does this mean?

We’ve even taken a tough decision regarding Teddy. Teddy is the 6th member of our family read about how important he is here We have decided not to take him. There have been tears already. My daughter doesn’t think she will sleep without him, but the risk of losing him is too awful to even contemplate. Better one night without him than a whole lifetime.

The one thing I’m undecided on is books and stuff to do on the train. They’re not essential, but I need to balance up the weight (and the moaning) of carrying them compared with the whingeing because of boredom on the train. I guess I’ll just see how much sapce there is and take a decision at the last minute.

It would nice if this experience works out well and it teaches me that I don’t need to carry the kitchen sink wherever I go.

But I doubt it will. I will just be grateful to be back to ‘normal’, free to weigh myself down and tire myself out with unecessary crap. Just in case. 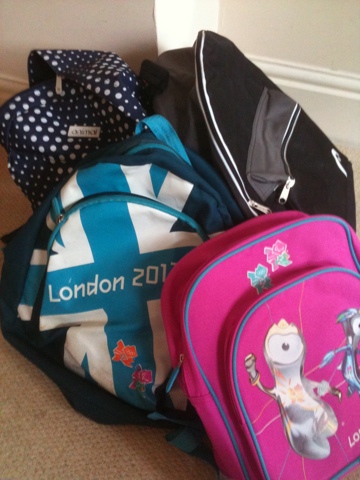