I may have mentioned once or twice that I don’t like housework. For me, there is only one way to get through it. Music. It keeps my mind off the job, but it tends to make me dance, so possibly it slows me down a bit.

My musical tastes have changed over the years – from Dad rock of my childhood (this no longer has a place in my life, I’m pleased to say), through the indie of my teens and early 20s, the shameless pop of my mid-to-late 20s and now to chart music with a fair amount of dance thrown in.

My favourite way to listen to music is on shuffle. You never know what you’re going to get next –

From Queen to Steps to Katy Perry to The Killers to Tinie Tempah to Glee to Manic Street Preachers to Take That to Jessie J to Keane to Sugababes to Lady GaGa to REM to Spice Girls – it’s all there and a lot more besides. 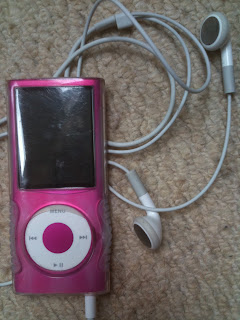 When you’re hoovering there can be no greater pleasure than suddenly hearing The Boomtown Rats’ I Don’t Like Mondays or, the greatest pleasure of all, Queen’s I Want to Break Free. You know what I’m talking about, right? The video? With the hoovering in? That is a priceless moment.

Every track has a story or a memory attached.

This is what I got today:

Take That’s SOS – the whole of the Progress album just reminds me of training for the Bath half marathon in the depths of January and February last year. I can picture my route, I can feel the cold, I can even taste the lemon and lime flavour of the Lucozade Sport.

Keane Bedshaphed – the whole of Hopes and Fears reminds me of my best work friend who told me endlessly what a great album it was and then of a lovely holiday to Fowey in Cornwall when my younger son was 11 months and I actually bought the album. In Tesco in St Austell.

Jessie J Mamma Knows Best – this is my least favourite Jessie J song. I would go as far as to say it is the ONLY weak song on the album in my opinion. It’s another running song – this time running in cold April morning air through the trees and round the lake at Center Parcs in 2011.

Manic Street Preachers Ready for Drowning – this takes me back to my last days living in London in 1999 when I borrowed the CD off my housemate who had a bigger bedroom than me. Then I bought it myself and remember driving in my very first car, a Ka, when I first started work where I still work now!

REM I’m Gonna DJ – this is another Center Parcs memory from a few years earlier. This is one of my absolute favourite REM songs and I remember the feeling of freedom of walking the two minutes to the shops in the Plaza on my own and leaving the kids behind in the house with Daddy.

Queen I Want It All – not quite such a classic hoovering song, but takes me right back to secondary school and my old friends. One of them did a very amusing parody of this taking the pee out of another of my friends who was always thought to be a bit spoilt.

Do you do housework to music? What songs get you through? And what memories do they give you?