Catching the Sun by Tony Parsons

I’m a big Tony Parsons fan, so I was looking forward to reading his latest. For those of you not familiar with his works (not many people, surely everyone’s read Man and Boy?), Tony Parsons fundamentally writes about dads who love their kids. Either the dads or the kids usually get themselves into some minor scrapes/ brushes with the law, but it’s always for the right reasons, because they are fundamentally good people and they were only trying to protect their family.

Catching the Sun really fits the Parsons mould. Over the years his books have become increasingly East meets West, so what started as a mere mention back in the days of Man and Boy is the entire theme of the book now.

Catching the Sun is the story of a family – mum, dad and twin 9 year olds who are starting a new life in Thailand. There’s beautiful descriptions of the beach and nature and lots of detail on the seedier side of life in Thailand.

About a third of the way through, the book encompasses a major historical event – which I worked out about half a page before it actually happened.

The family encounter lots of characters, both British and Thai, on the way. Some they fall in love with, some make life difficult for them.

And that’s about it. I enjoyed this book, but I don’t think it was his best. 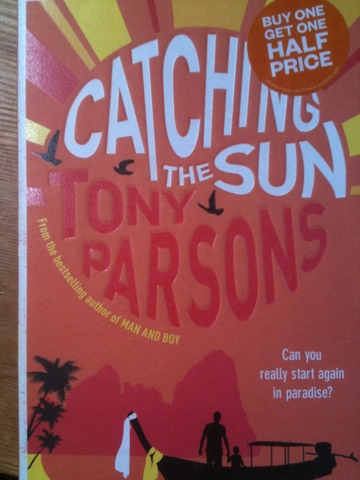