9/11 through a colicky haze

On the anniversary of the destruction of the Twin Towers, a story from my eldest son’s early days…
After finally getting my boy to feed read about that here we settled into some sort of chaotic, sleepless family life, as every family does with their firstborn. It was hard, but it was OK really.
Until the day he turned two weeks. Which was also, coincidentally, the day my husband went back to work.
My baby started to cry and he wouldn’t stop. I didn’t know what to do him. Nothing would pacify him. He wouldn’t settle to feed and he wouldn’t be put down. He cried and cried and cried. And I carried him round the house.
I took him to the health visitor and she told me he had colic. Then I cried.
At our NHS antenatal classes we’d had a talk by some new parents, who’d told us about colic. It sounded horrendous. It sounded like something I definitely didn’t want my baby to have. It could come on any day from two weeks – and it blimmin’ well came on the day he turned two weeks. Not fair.
And so went the next three months of my life. Tiny (he didn’t grow very fast),screaming baby. Impossible to pacify. And me, feeling like a bad mother if I put him down, so I just carried him. Constantly. The only respite we got was when he was feeding.
We gave him Infacol and winded him, but he just wasn’t a happy baby.
The health visitor taught me to lie him across my arm on his tummy – like a lazy tiger sleeping on the branch of a tree. He was so tiny that it wasn’tdifficult.
I thought it was normal, until I heard my health visitor on the phone trying to arrange an NHS baby massage class for us. ‘We’ve got a very fractious baby here.’ VERY fractious?! I didn’t realise he was that bad, although I should have done. It’s good to have your ‘hard work’ baby first, because you don’t know any different.
I felt like everywhere I went people were staring at me – with my very fractious baby that wouldn’t grow. By three months, it seemed that everyone else’s babies were filling their car seats, but mine still looked like a newborn – a newborn whose face was permanently bright red and crying.
One day we were in Marks & Spencer’s, as we so often were. I walked into town every day just to give us both a break. I kept hearing snippets of conversation – they were all different, yet somehow they all seemed to be the same. About something bad that had happened. But how could it have happened to everyone? How could everyone know about it?
I was too wrapped up in my own crying-baby world to give it another thought. When I got home, my husband rang. ‘Put the telly on.’ So I did. And there it was – a plane crashing into a building in New York. Shocking. So THAT was what everyone had been talking about.
All day, I stood in front of that telly, my scrawny baby lying across my arm, jiggling him up and down, and watched events unfolding. I had never seen anything so shocking, yet at the same time it didn’t really register. Because I had a colicky baby.
A friend of mine was really upset by it, she couldn’t get over it. She had no relatives there, she had never been there, yet she really felt it. But she didn’t have a colicky baby. A year earlier, or a year later, I would have felt it too. But seeing the world through a colicky, sleepless haze is difficult. The troubles of the outside world can’t affect you as badly when you can’t hear or think for screaming.
So that’s why I never shed any tears for 9/11 at the time, although, since my head has cleared, I have been upset by it and been able to see it for the truly shocking event it really was. 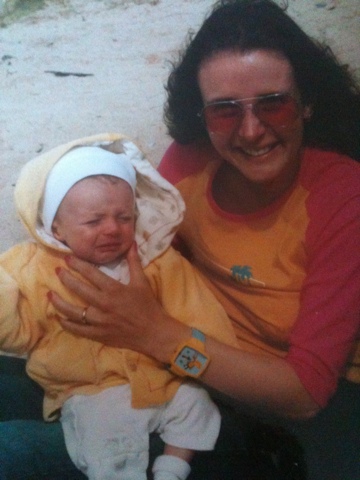