The kindness of strangers

Home » Family » The kindness of strangers

Our first day on the beach near Padstow was, typically, a bit chilly. The sky was grey and it was blustery to say the least. I realised my kids were the only ones on the beach not wearing wetsuits. They have those sort of two-part swimming costumes designed to keep the sun off them (if we’re lucky enough to have any) and keep them slightly warmer than regular swimming stuff.

The tide was high, the waves were BIG and my younger son was drawn to the sea like a moth to a flame. He looked so vulernable in that water and I was yelling at him to come back and not go to deep. He didn’t hear me through the roar of the sea and the waves. In the end, I waded in after him in my shorts and got soaked myself. (I don’t do swimwear – I used to take it on holiday and carry it home unused every year, so I just gave up taking it with me. It’s just too cold in Padstow for swimwear.)

As soon as I’d dragged him back, he was off again. Before long he came out of the sea clutching his arm and in floods of tears. I assumed he’d been hurt. But no, he’d lost his wristband. His yellow McDonalds freebie Olympic wristband. It was like the world had ended. He was inconsolable. He loves yellow, it’s his absolute favourite colour and he’d worn that wristband every day since he’d got it about three weeks previously. 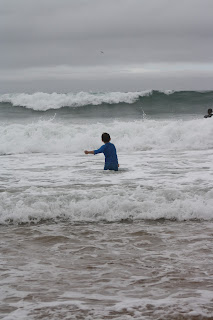 On another day I might have yelled at him to stop being so stupid and snap out of it. But this was his holiday, I didn’t want to make it worse by being horrible to him. So I sympathised with him and so did the rest of the family. We all went back to have a pointless search for it around the rocks several times that day, but the wristband was nowhere to be seen. And there was a cloud of sadness hanging over my boy.

I knew we couldn’t get another one. The promotion was over and we were also miles from a McDonalds with no prospect of going near one for another week. I also knew that plenty of people would have those freebie wristbands lying round their houses that they didn’t even want. By my reckoning, they probably appeal to kids aged between about 4 and 12 and anyone who doesn’t fall into that bracket wouldn’t be bothered about them.

I knew what I had to do. I had to appeal to the kindness of strangers. I turned to Twitter – a community of strangers who are all really nice, really supportive people. They are parents, they would understand a child’s upset and would want to help. And they did.

I put my appeal out there and got seven instant retweets. Three ladies who I didn’t follow and didn’t follow me came back to me saying they had yellow wristbands we could have. A couple of others offered red or white. I accepted two ladies’ kind offer, just in case anything went wrong with one of them and thanked the third for her help. I offered both ladies the postage, but they both said not to worry. I was stunned and so grateful – postage is really expensive these days and these are people I don’t know at all!