Salmon fishing in the Yemen by Paul Torday

Salmon fishing in the Yemen… Think about those words. They make no sense. How can you fish for salmon in the Yemen?!

I’ll be honest, those words bored me for quite a long time. This book sat beside my bed for nearly a year before I decided to read it. It’s a boring title and a boring cover.

A ‘fisheries scientist’ (boring job) Dr Alfred Jones is asked to look into the possibility of introducing salmon into the Yemen for a wealthy sheikh who enjoys salmon fishing in Scotland and wanted to do it in his own country. Until this point, the highlight of Dr Jones’ life was a press release on ‘increased water acidity and its effect on caddis fly larva’.

Dr Jones thinks the project is impossible, but he is under pressure first from his boss, then right up to the Prime Minister, to make it work.

Set against the backdrop of his failing marriage, and with money no object, Dr Jones does all he can to fight against nature and introduce salmon to the Yemen.

The film of the book came out earlier this year, starring Ewan McGregor (surely not nerdy enough?) as Dr Jones, but sadly I didn’t get to see it. I doubt it would do justice to this quietly hilarious book. 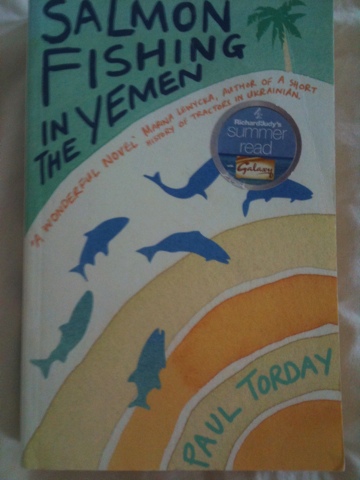