The more observant among you may have noticed that I, Mrs-blog-daily-never-off-twitter has been uncharacteristically quiet this weekend. That’s because I’ve been dancing! All weekend.

My daughter and I go to a lovely dance school, which just does street dance in several forms (none of your ballet, tap and modern). It is a friendly place and no-one is pushy or competitive. It is a great place to learn to dance, whether you are 4 or 40 (in just over a year). It’s run by a truly amazing young woman who manages to combine running a dance school with being an actual primary school teacher and being an all round nice person. I am in awe of her. She is ably abetted by two more fab dance teachers who are also lovely people and two girls who are training to be dance teachers.

One of the many reasons I’ve been stressing over the past few days, is that I’ve spent every evening for the last couple of weeks desperately learning some dance moves that I just couldn’t get into my head. I wasn’t nervous about the show, or even about going wrong, but I still wanted to get those moves right. Least of all because, in one of my two dances, I am RIGHT AT THE FRONT. No-one to copy (my usual fail-safe back up plan) and nowhere to hide.

I am not sure how I ended up there. The dance school has a long and proud tradition of putting the best dancers at the front and people who are ‘slightly less talented’ (like me) at the back. I’d worked my way up to the middle and I was fine with that. But somehow I’d ended up at the front. I was still crap though. That’s for sure.

So I’ve been drilling my dances and yesterday spent half the day at the theatre for the dress rehearsal. AND I STILL GOT IT WRONG! Agh! Even as I was telling my friend that it didn’t matter if she got it wrong, I was still beating myself up about it.

On the plus side, I did get to see all the other dances. And they were awesome. Even better than last year’s.

Today I spent the whole day at the theatre – from 10.30 right until 7.45. Well, in reality I spent most of it in the library because, with 150 students, there isn’t room for them all to change at the theatre, so the adults and teenagers got dressed at the library. Right inside it. With the books and computers. You will be pleased to hear that it was actually closed.

It was a long day, particularly taking into account that I was in two three minute dances, plus the finale, for two shows – making up an absolute maximum of 20 minutes on stage. But do you know what? I didn’t care. Even though I’d got loads of stuff to worry about at home. Because I love theatres. I spent every summer day (and often night) at a theatre pulling together children’s plays as a teenager and they were among some of the happiest times of my life. And to be back in a theatre, even as such a small cog in the wheel, was fantastic.

Like most people in my class, I was hazy on our second dance – which we have only just completed, but confident about the first dance. We practiced the second dance in the library, then went on stage for our first dance. With my husband, two boys, mum and dad, sister and brother-in-law, plus friend and her two daughters, all in the audience. Half of us are on stage for the first 30 seconds of the dance. And it went wrong. Badly. While I was down on the floor, some people were already getting up and others hadn’t even gone down. We pulled it back, but it wasn’t the triumph we’d hoped for. The audience thought it was fine though. Good, even.

Then my girl was on stage. Dancing to music from Hairspray with the other Year 1s and 2s. Wearing a lovely pink sparkly skirt with her long hair down her back. I watched her from the wings and my face nearly cracked from smiling. For me, now my kids are getting bigger and can eat and sleep and go to the toilet, these are the things that make me most happy – the dancing, the football trophies and scoring a try. She was so brilliant and so beautiful. I was so proud. She really gave it her all. 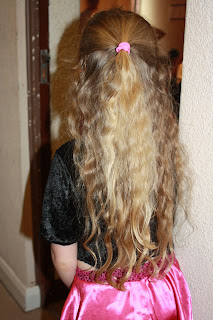 For the second dance there was a ‘surprise’ for the audience, although I’m not sure if any of them noticed. Someone (me) was in the audience and shouted out ‘Gimme a beat!’ before the first few dancers started dancing, then I went up on stage and we all joined in. This is the dance with me at the front. And it went pretty well really. I ‘may’ have slipped up slightly at the end, but it moves so fast I don’t know whether anyone would have noticed. It certainly felt better than the other dance.

Then it was back to the library and back to the wings to watch my girl. This time dressed as the world’s cutest chimney sweep dancing with a sparkly sweep’s brush to Step in Time.

Then we had a break and we did it all over again. And this time we got it right on the first dance and my moves felt bigger, better and bolder on the second. And I watched my girl from the wings again and she melted my heart again.

When it was all over there were trophies – for the infant, junior and senior sections. I thought/ hoped that my daughter would get one. Not necessarily this year, but maybe next year or the year after. She has grown so much. She was the best dancer in her babies’ class last year, but looked a bit out of her depth when she moved up to the dizzy heights of the Year 1 and 2 class. Now she is up there with the best of them and you would never guess she was only in Year 1. Well, she didn’t get a trophy, but I wasn’t disappointed. These trophies are for the whole year and across several classes, not just her own. Her time will come.

And so they got to the senior section. Most improved dancer. Even when they said my first name I still didn’t think it was me. There’s probably one of the teenagers with the same name. But when they said my surname too, there was really no question. It was actually me! Out of all the adults and the teenagers, I’d won most improved dancer! To say I was shocked would be an understatement.

I thanked both my teachers profusely. They said it was a unanimous decision. My fellow students said it was well deserved. But I still can’t see it. I always feel I am a good dancer – not in the ballet sense, but in the ‘feeling the music and expressing yourself’ sense. In being confident and not holding back. But when you’re learning a routine, you can’t do that. And I find it so hard to learn. I feel I don’t dance as well as I should, that the real dancing I’m capable of isn’t visible.

But maybe it just is. Maybe that’s why I was on the front row.

And now it’s all over for another year. Yesterday I was working so hard to get those moves into my head. I wanted it be over, I needed that bit of evening back to concentrate on other stuff. But now it is over and I will miss it. Now it doesn’t matter if I forget those dances because I will never need to do them again. But, the ironic thing is, I won’t forget them, they will be in my head forever, along with the Lady GaGa dance, the Usher dance and the Janet Jackson dance I struggled to learn last year. 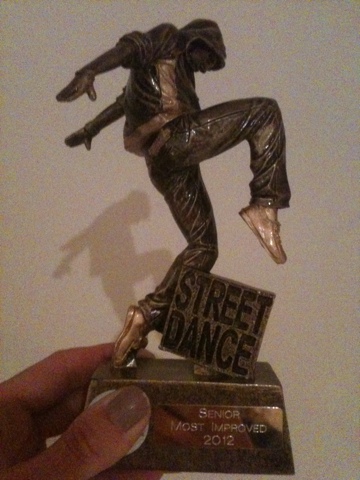