My travel-phobic 6 year old daughter has announced that she wants to go abroad! Specifically, she wants to go to Barcelona. This seems like too good an opportunity to miss, so we are taking her request pretty seriously.

It all started when my younger son was searching the bookshelves for publishers. He is writing a book (‘101 ways to insult your enemy’ – so far he has written two of the insults) and thought he’d better find out who could publish it for him. So he went through all the bookshelves and noted all the publishers he could fine – 99 in total. In doing so, he removed a book about Gaudi from our bookshelf.

‘Gaudi, we’ve been learning about him at school. In Barcelona. Parc Guell with the lizard and the benches.

I was impressed. I hadn’t even HEARD of Gaudi until I went to Barcelona in 1998, at the age of nearly 25. She started flicking through the book and showing us things she’d learned about at school. Then she said it.

My daughter, the girl who hates ‘other countries’ (apart from Disneyland Paris, which doesn’t really count), hates food that isn’t English, drinks that aren’t English and gets travel sick, asking to go to another country!

My memories of Barcelona are of a beautiful and vibrant place, nice and warm, but not unbearably hot. With Gaudi architecture everywhere.

In our few days in Barcelona, we climbed every hill there was, admired the city from every possible angle and soaked up the atmosphere on the Ramblas. It was most definitely a happy time. A memory from the time when travelling was easy and not a big military operation that was only ever going to end in starvation, travel sickness and lost stuff.

I wanted to find my photos to show my daughter that we really had been there – to Parc Guell, the Sagrada Familia and La Pedrera. So I crawled under the bed. I found photo albums from 1997 and 1999 (not to mention the 60 or so since having the kids), but nothing from 1998. I tried the garage. The jury is out, that needs further investigation. Ditto our small amount of loft space. Those photos were real, I can picture them. I just can’t find the damn things. I’ve become quite fixated on tracking them down, but to no avail.

When Daddy got home from work, my daughter told him all about Gaudi and said it again: ‘I wish we could go there’.

So my husband fired up the internet and started searching. Actually, for three or four nights it isn’t too expensive. Even for a family of five. And you can’t say that about many things. He thinks he even found the hotel we stayed in, although I wouldn’t know. There are better hotels too, for a good price.

Flights go from Heathrow, which isn’t great, BUT IT’S NOT GATWICK. Most significantly, they go TO Barcelona, not somewhere 100/ 150/ 200 miles away. Can you see where I’m going with this?! IT’S NOT LIKE ITALY. IT IS FINE.

If you don’t know what I’m talking about, you need to check out this post and this post about our terrible trip to Italy.

We haven’t booked it yet, but the whole family is pretty keen, so I think it may really happen.Imagine that, us actually going abroad. And all thanks to number 2 son and his book about enemies! 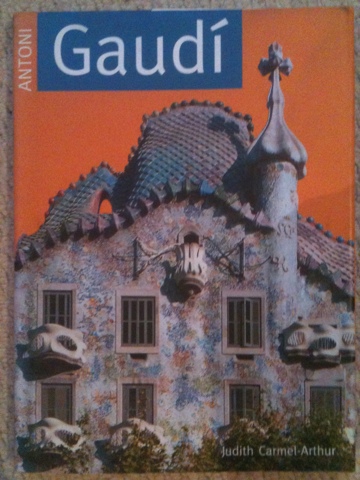