You can read part 1 here

The boiling hot weather and bright sunshine we had been promised was not in evidence. It was humid, but it was raining.

We went out to meet the various in-laws – my sister-in-law and husband to be, his parents, my mother-in-law and her partner and my brother-in-law and his son – my kids’ one and only cousin. He is the same age as my eldest and lives in America, so they only see each other every couple of years, usually at Christmas. Needless to say, they were very excited to see each other and to be in a strange place. The adults were all busy chatting and there was only one person keeping an eye on the four kids. The one with no voice. Every time they wandered off, I went to yell, and nothing came out. Then I had to frantically pull on my husband’s sleeve and point until he got the message and retrieved whichever kid or kids had gone too far or gone the wrong way.

As it happens, Malcesine had some lovely shoe shops. And they were all open and all cheaper than that damn shopping centre. Gutting. Although they didn’t stock purple Crocs flip flops, on the plus side.

I am pleased to say, the wedding passed without a hitch (no pun intended). It was a beautiful day and took place in a beautiful setting – castle ruins on the edge of the lake. Then we had a meal which literally took us from lunchtime through to teatime with about eight courses. I think the kids ate one or two chips, because they were still on hunger strike, unless it was ice cream. And even then we had to tell my daughter it was English ice cream. 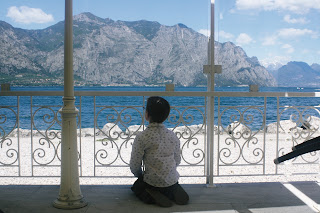 The day was rounded off with a boat trip on the lake. No-one fell off. No-one was sick. No-one even argued with their brother. It was, in short, a brilliant day. Although I did have to remove the Zara wedges after an hour and a half because they were so uncomfortable and I’ve never worn them again. My Crocs flip flops were absolutely fine with my maxi dress.

Before we went to Italy we said we would definitely visit Venice. Or at least Verona. Once we knew how long it took even to get up the side of the bloody lake and that it made my girl sick, we amended our plans. We were staying in a lovely villa in a lovely town on a lovely lake, what was the point in going anywhere?

We did take a boat trip to the top of the lake (nearer than the bottom of the lake) and spent a day at the town there, but apart from that we stayed put. It was amazing how quick the week went, anyway. Obviously we had expected to have a whole day at the start of the holiday which was totally wiped out.

You know how we ‘like’ to go to A&E? We might not have made it to Venice, but it would be a shame to go all the way to Italy without calling in on A&E.

We were hanging out at the pool when my son had his accident. There was a row of about six very small villas. Our villa was just an open-plan lounge with very basic kitchen, where my husband, daughter and I slept, with a bedroom for the boys and a bathroom at the back. Above these villas was a swimming pool and decking area.

I had just popped down to the villa, for a drink or something, when my eldest came in to tell me his brother had a splinter. A splinter?! Was it really worth coming down to tell me that? I’d be there in a minute.

As soon as I stepped out of the villa I heard the screaming. It was continual and very, very loud. My son had the biggest splinter I had ever seen in his foot. It was in deep and it HURT. My son is a bit squeamish at the best of times. He grabbed onto me for dear life and didn’t let go. And he didn’t stop screaming or shouting ‘Mummy’.

My sister-in-law was about to set off on honeymoon. She went to her bag to get some tweezers. Our first aid kit, we discovered, was with the shoes in the missing suitcase. First, she tried, with no success. And my son carried on screaming and squeezing the life out of me. Then another lady who said she was a nurse, but who knows if she actually was, tried. She tried cutting into his foot to remove the damn thing, but that didn’t work. The sight of someone cutting into his foot made my son scream even louder. So the villa owner tried. No luck.

There was only thing for it. The villa owner drove my son and I to A&E. But it was temporarily closed because there had been a road accident. So we took him back to the villa and soaked his foot. Later in the day, my husband took him, without his translator.

My son came home smiling, with a bandaged foot and strict instructions not to swim for the rest of the holiday. Yeah, right. That lasted less than 24 hours.

What little remained of the holiday passed without incident.

Although my daughter rounded the whole thing off nicely with a final travel sickness episode as we pulled into the airport. And she continued to refuse most food and drink all week.

We had one more pointless attempt at tracking down our suitcase when we got to the airport, but that suitcase and its contents were long gone.

In addition to the shoes, we had lost: seven bottles of suncream, a leather folder, an electric thermometer, first aid kit, DS charger, lead for iPod speakers and Sony Ericsson charger. The total value was close to £500. We never got any insurance money. We were offered £42, if we could produce receipts. FORTY TWO POUNDS?! RECEIPTS?!

If we’d read the small print (and who does?) we would have discovered that each person has an excess. The fact that my then four year old daughter wasn’t capable of driving herself to the shoe shop and purchasing her own Clarks sandals was neither here nor there. Because many of those things ‘belonged’ to the kids meant they hadn’t reached their own excess and they were liable for them.

And that is why we don’t do foreign holidays.