I have a big red monkey jumper. It is very old and very scruffy. But I wear it every day. Twice a day. My husband takes the p*ss out of it. He said jokingly ‘Why don’t you write a blog about it?’ and I thought ‘Do you know what, I might just do that!’

So here it is… The story of the big red monkey jumper.

Remember Paul Frank? He was the guy who designed all those Tshirts, hoodies, purses and bags with that wide-mouthed monkey on it that were popular in the late 90s/ early noughties. H from Steps wore them. And so did I. They were kind of cool (and rather expensive). They were pretty cutting edge really.

It wasn’t just monkeys. There were giraffes (I think the giraffe was called Clarence), polar bears, flamingos, loads of stuff. I was as obsessed with Paul Frank then as I am with Superdry now. My whole wardrobe had wide-mouthed animals on it. I had lots of accessories too, although I drew the line at the toilet seat cover. Probably a step too far.

Paul Frank has enjoyed a bit of a renaissance in recent years, but is marketed at kids now.

Anyway, when I first got pregnant 11 and a half years ago (where did that time go?) I deluded myself that I wouldn’t get that big really and that I could just buy normal clothes in slightly bigger sizes. I was a 12 then (I’m an 8 now) and thought buying 14s and 16s would see me through. Well, it saw me through the first three or four months!

So I bought a big red monkey hoodie which I thought would get me through my nine months. It had the wide-mouthed monkey face on the front and, what I particularly liked, monkeys in colourful circles down the sleeves. It was pretty expensive and I thought it was the best thing since sliced bread.

At some point I stopped wearing it in the day, but then it had a new role. It became my dressing gown. Because I absolutely won’t wear dressing gowns (more on that soon), but I still get cold. My beloved big red monkey jumper lives on my bed during the day and on the floor next to the bed at night. I put it on as soon as I get up, then again when I get ready for bed. Sometimes I put it on after running too because I get cold.

You’ll be pleased to know it does have a wash sometimes. Then I’m forced to wear one of my old Superdry hoodies instead, but they’re not the same. They’re too small to wear with pyjamas. I think it’s the fact that it’s a ‘large’ which has kept me wearing it for so long – you don’t want to be hampered with a tightly-fitting hoodie over your pyjamas.

It was obviously worth the 50 or so quid I paid for it – it’s cost per wear must be down to a fraction of a penny. And, yes, it’s quite scruffy, but it hasn’t faded that much considering its age.

At some point I may have to stop wearing it, but I reckon it’s got another three or four years in it yet!

Update February 2017: I have reluctantly just stopped wearing it, because the cuffs are falling apart. I was right about the three or four years though – I nearly managed another five! 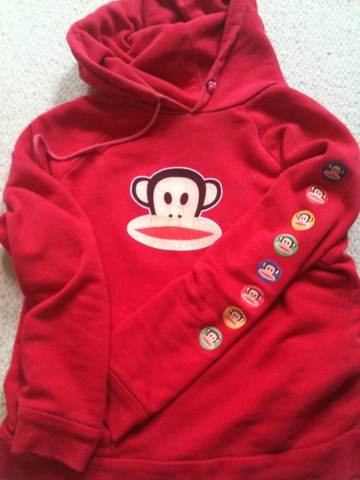