Today is singing day at my kids’ school (and lots of other schools, too, I believe). It’s a day to ease off on the Maths and English pressures, learn some songs and sing with their friends. During the day, the children will be writing their own songs. They can also perform a favourite song for their class and, best of all, they can go to school dressed as their favourite singer.

It’s possible the coolest Year 6s might find it a bit lame. No, scrap that. This isn’t Victorian day – this is POP STAR day (OK, singing day TECHNICALLY) – this is a chance to go to school in high heels and make-up or your tracksuit because it could just about conceivably make you look like a singer.

Our school LOVES dressing up day. So far this year we’ve had Spanish day (two bullfighters and a little Spanish dancer) and hero day for Remembrance Day (Winston Churchill, a soldier and a little lady firefighter). Last year we had French day (stripy Tshirts and berets, of course) and World Book Day (two Harrys and a Hermione). There are also individual year group dressing up days – like Year 2 Great Fire of London day and Year 1 fairytale day.

These days put pressure on parents and they are not cost neutral. If you are lucky, you might be able to borrow a costume. But what are the chances of borrowing three? Nil. Parents, including my own husband (who plays no part in creating the costumes), moan about them.

BUT, I’m toeing the governor line here, I do believe they enhance the children’s learning. The children’s excitement as you arrive at school on a dressing up day is palpable. Dressing as Winston Churchill or Mr Gum makes the day memorable, so it helps reinforce the messages – about Remembrance Day, Spain, reading, singing or whatever.

So back to singing day. What to wear? For my daughter, there was only one person to dress up as – Adele – and only one song to learn – Someone Like You. Not that she needs to learn it, of course, she already knows it. I just wish she sang it in her own voice, rather than trying to ‘be’ Adele.

Where to get a black dress for a nearly 6 year old? From my friend with four kids, lots of cousins and a big house to store lots of clothes in, of course. Whenever I express a need for anything random, she says ‘I’ve got one of those you can borrow’.

I never thought a little girl could look beautiful in black, but she really does. And she was one of only two children in her class brave enough to stand up in front of her friends and sing her special song.

My younger son wanted to be ‘Harry from One Direction’ – or Liam or Louis. Generic One Direction. Year 3 boys are quite keen on One Direction, being too young to realise that One Direction are marketed at tween and teenage girls. That’s easy enough – clothes from his own wardrobe – a Tshirt, under a shirt, a casual pair of sunglasses clipped on to his Tshirt and trainers instead of those damn Crocs.

My eldest was (as ever) the most problematic. My eldest doesn’t much like music. But he knows what he DOESN’T like – JLS, Justin Bieber, Bruno Mars and, of course, One Direction. If he ever expresses an interest in music it is for ‘my’ music – the music of the teen and 20-something me – Levellers and Manic Street Preachers. Oh my God, all those Levellers Tshirts I used to have – where did they go? And those Guatemalan shirts and baker boy caps…

But I didn’t need the Tshirts or the caps. He didn’t want to be the Levellers. He toyed with the idea of Ed Sheeran (‘just spray your hair orange’) before throwing a complete curveball.

My indie-kid son wanted to go to school dressed as LMFAO. Well, not DRESSED as such. Because LMFAO only wear pants and sunglasses. The word ‘inappropriate’ was flashing in my head in big, shiny letters, but my son didn’t see a problem with it.

He was willing to compromise with wearing a vest with the words ‘I’m Sexy and I Know It’ emblazoned across it. Not inappropriate, apparently, because a Year 2 sang it in the school talent show. (I would have LOVED to see the Head’s face.) So we went for a vest with ‘Every Day I’m Shuffling’ on it. And his pyjama bottoms with a pair of brightly coloured boxers peeping out over the top, a massive (borrowed) Afro wig, some Primark sunglasses and my fake leather jacket. And he looked pretty cool. There was no question of who he was – or the other 50 boys who had opted for LMFAO.

And the day finished on a real high for him – because he finally found out what LMFAO stands for – his friend looked it up on Wikipedia! Result. 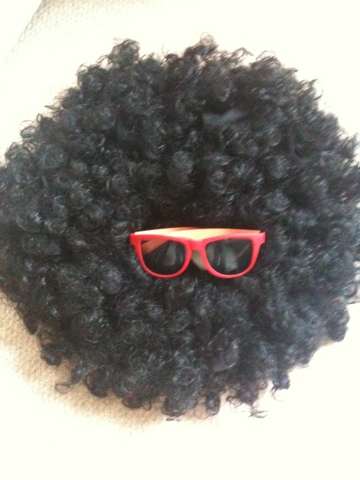