Most people reading this have probably already had their Covid-19 vaccine. So you’re probably not going to learn anything from it. I just wanted to record it for posterity.

I know some people were nervous of getting their Covid-19 vaccine. Not me. I was excited.

I was excited when my parents got theirs.

I was excited when I heard that our area was doing particularly well at getting through its vaccines.

I was excited when I saw a 55-year-old friend get his vaccine in the middle of March. Mine would be really soon!

I was excited when my parents got their second doses.

Then I got a bit jealous of all the 43 and 44-year-olds getting their vaccines in March and April and, at 47, I’d heard nothing.

Soon after the excitement of my 55-year-old friend getting his, the government announced that they would be slowing down first doses so that people could get their second doses. I totally got that. I’d have to wait a bit longer.

It appeared that, although our area in general was doing well and getting through its vaccines fast, our GP’s surgery wasn’t. Most of the others were way ahead of the game – always a category or two ahead of the government’s guidance.

Between the health and social care workers, the people with health conditions and the people who lived with a vulnerable person, who quite rightly had their jabs long before me, plus the people going to mega-organised GP surgeries, it felt like my husband and I were the last 47 year olds in the world to get our jabs.

The government announced on 12th April that 45-49 year olds were eligible for their vaccines. I went online to book, expecting to see the local fire station where EVERYONE had had their jabs. But my closest option was Malvern, 15 miles away. Alternatively, I could go to Bristol or Birmingham.

Where was the fire station?

On the Thursday, I got a government text and I tried again. Still no fire station.

On Monday 19th, I got a government letter and tried again. Still no fire station.

I didn’t want to travel to Malvern for my jabs, not just once, but twice. But I was starting to think the GP surgery would never get in touch and I was being silly to keep waiting. I’d waited this long, surely I just needed to get on and book it?

So on Monday 19th, my husband and I booked both of our jabs in Malvern for later in the week.

Then on Tuesday 20th, we finally got the text from the doctor’s surgery. And, as if by magic, there was the fire station.

So we cancelled our Malvern jabs and booked for the fire station.

We had our jabs last Thursday evening.

The fire station was very quiet and it was all very slick.

We were given hand sanitiser as soon as we walked through the door. We were then sent to a desk to confirm our details. We were also instructed to take a photo of a list of rare side effects, which don’t appear on the current patient leaflets. These are clearly to do with the very tiny risk of blood clots on the brain following the AstraZeneca vaccine.

The jabs take place in the area where the fire engines are usually parked. There are three tents, each containing two booths. My husband was sent to the first booth in the far tent and I was sent to the second booth. I stood waiting while two nurses organised their vaccines.

Then my husband was jabbed, and I was still waiting. So the nurse who’d vaccinated him offered to do mine. She wiped down the chair.

I can genuinely say I didn’t even feel the needle go in. It was all over incredibly quickly.

The nurse had a Nottingham accent, which was very familiar to me, although very unusual around Gloucestershire. I realised she sounded exactly like one of my best friends, so I asked if she was her sister. She was!

My husband was sat waiting on a socially distanced chair and I started marching out. But he’d been told he needed to sit and wait for 10 minutes, as he was driving. So I sat down too, and this was the first time I’d even considered which jab I’d had. I checked my card and it was AstraZeneca. 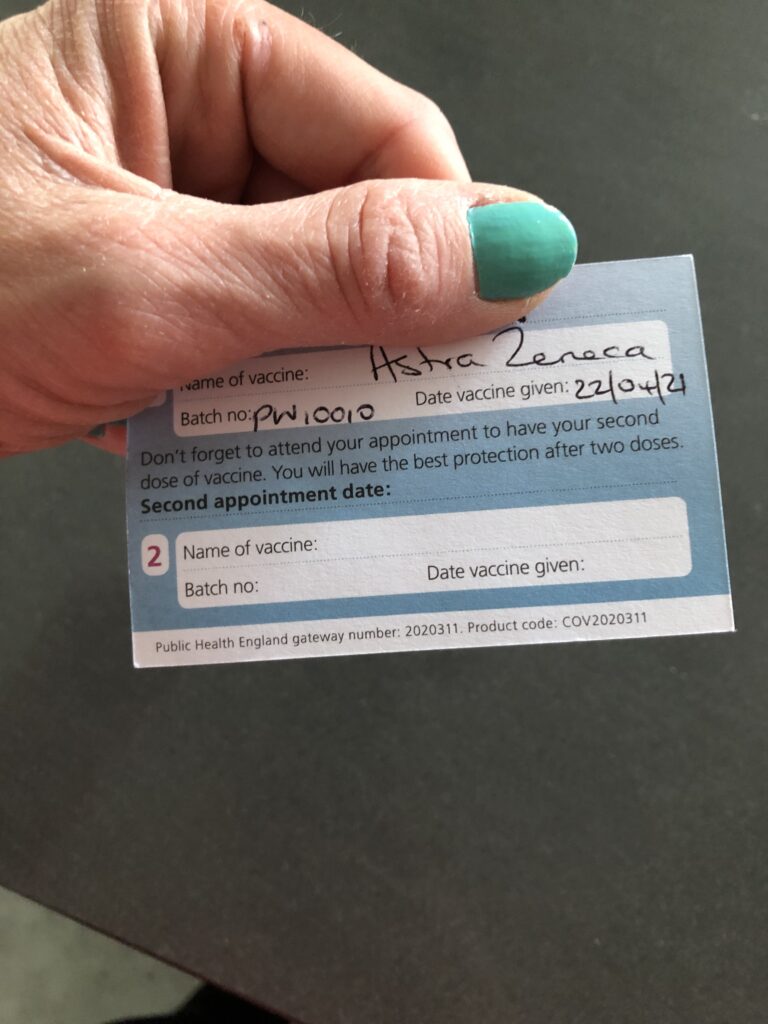 After 10 minutes, we got up, and a volunteer wiped our chairs.

I’d heard all sort of stories of horrific side effects – headaches lasting for days and people who couldn’t get out of bed. Others said they didn’t really get any side effects – they just needed to sleep for 12 hours at night and have a two hour nap the following day. I’ll admit, I was a bit nervous!

I’d also heard lots of advice about taking paracetamol two hours or four hours after the jab, and drinking lots of water. I drink lots of water anyway, so that was OK.

On the whole, I suspected I’d have mild side effects as I never get ill (with the exception of a mild dose of Covid-19 last year).

But I couldn’t sleep well that night, as I was literally waiting to start feeling ill. I was also really conscious that I shouldn’t roll onto my ‘bad’ arm as everyone had told me how painful it would be.

My arm wasn’t painful and I didn’t feel ill.

I even went for a run the following morning, although I started to feel a bit shivery and achey soon afterwards. The aches stretched right from my shoulders down to my knees. I took paracetamol and it took one and a half hours to take effect. 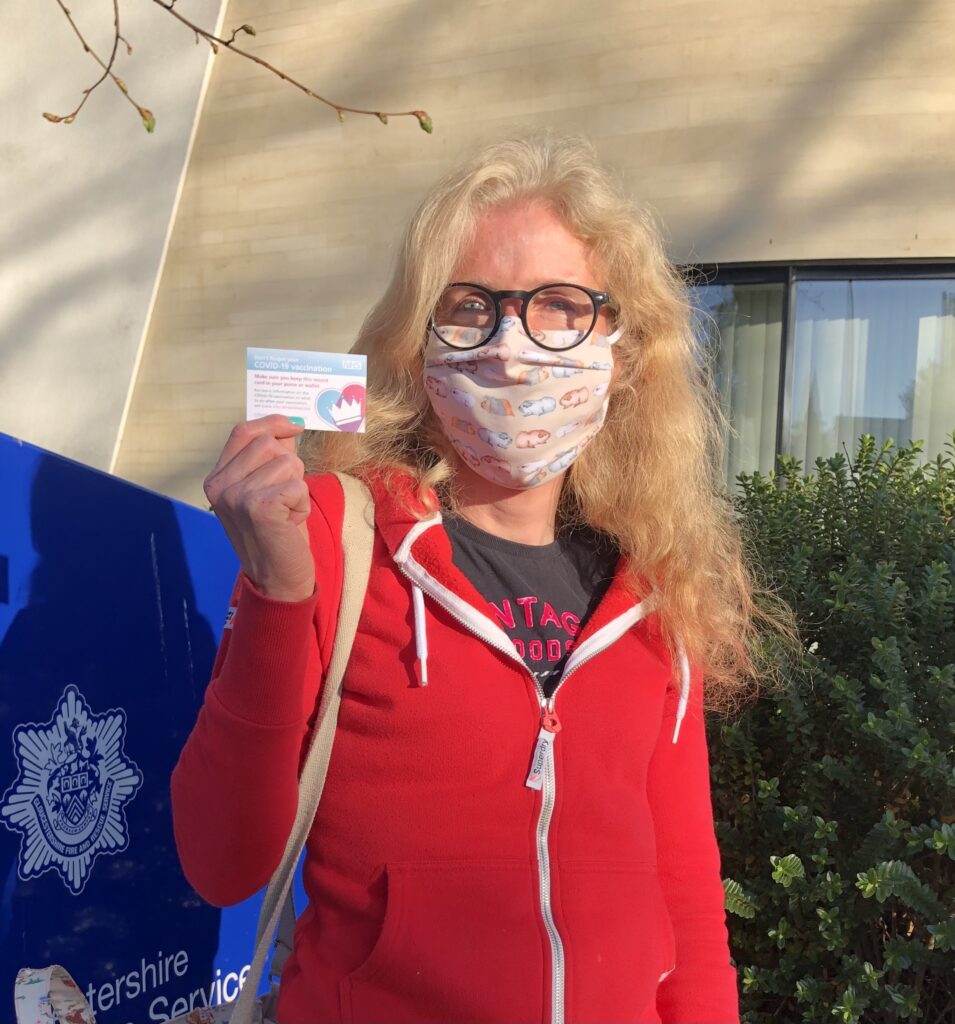 They came back slightly later in the day, so I took more paracetamol and after that I felt normal.

My husband didn’t do so well. His side effects kicked in a bit later than mine. He came home from work the next day looking like death. He perked up with paracetamol, but then spent some of the evening asleep on the settee. He had a bad night’s sleep that night and drank two pints of water between 4 and 5am.

Although he felt a bit better on Saturday, he still wasn’t strong enough to run on Sunday. Whereas I ran on Friday, Saturday and Sunday. I obviously got off very lightly.

It feels so good to be vaccinated at last. Now my 19-year-old son is counting down the weeks until his.