I’ve decided not to bore you by updating you on my marathon training every single week. Especially as the first couple of weeks on my training plan involved less running than I usually do. I decided to follow Newport marathon’s own training plan, which only lasts 15 weeks and starts off slowly, but then builds up very quickly.

The first week recommended just three runs, with the longest being a 60 minute ‘light run’. As I usually run four times a week, with the longest run being eight miles, I just carried on more or less as normal. I did however introduce body conditioning, and I realised why the plan schedules a rest day after the body conditioning, as my legs were so painful! I couldn’t run on Thursday as I usually do, so I followed the plan on Friday with a 30 minute ‘light run’. That was me running three miles much more slowly than usual, when I would usually run four miles.

Week two recommended four runs (my usual number), with the long run being a 10k. Again, this is less than I usually do. The Saturday recommendation was for a 20 minute light run, not a 23 minute parkrun as fast as I can possibly go. As the Sunday long run was manageable and I always do a long run after a fast parkrun on Saturday, I did my usual fast parkrun. And I did a nine mile run rather than a 10k on Sunday. But I promised myself that I would slow my parkruns down after that. The body conditioning didn’t hurt this week, so that was a result.

Week three finally took me into what I consider to be proper training territory – with a nine mile run on Sunday on the plan, a five mile run on Tuesday, a 10k run on Thursday and no rest after the dreaded body conditioning. Body conditioning had also increased to 45 minutes and I introduced a ‘stability ball’ to the routine. I am not the most co-ordinated of people and the most challenging thing was trying to stay on the ball. I nearly didn’t manage the 10k run, as my daughter was ill and doesn’t like to be left alone. But she agreed to let me go, as long as I stayed very close to home (it’s very boring running the same old laps).

Week four took me into five runs a week. I haven’t run five times a week since before I had the kids, and in those days I only ran two or three miles a day. I had a 45 minute tempo run (basically running fast most of the time with a jog to warm up and cool down) a steady 45 minute run, a 10k, a light 30 minute run (which was a slow parkrun) and an 11 mile long run. I prefer to run in miles, rather than minutes, so ‘light’ and ‘steady’ runs will be rounded to the nearest mile, so a ‘steady’ 45 minutes is five miles and a ‘light’ 30 minutes is three miles. The dreaded body conditioning was up to a full hour. Although I could feel that I had done it the next day, it didn’t hurt, so I think I’ve got the balance right with that.

I’ve kept up with my fuelling experiments during these first few weeks and, so far, everything is going well. But in the next few weeks I will be moving into uncharted territory of running over 13 miles. I’ll keep you posted on how I get on. 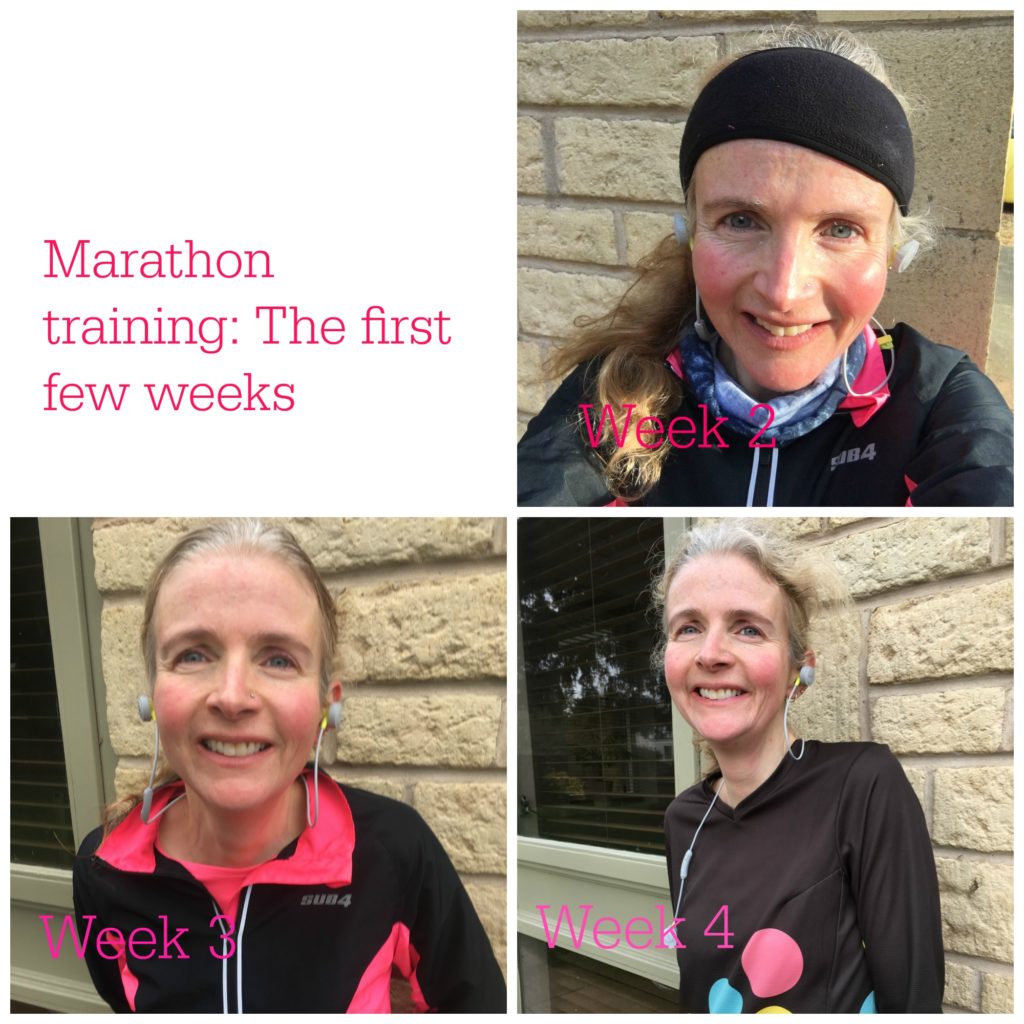