My son is home from his travels and the Beast from the East arrived, bringing some extremely cold weather.

Day 56 – Sunday 25th February – I ran six miles for the first time since I got injured nearly four months ago, which I was very pleased about. With my son still on his German exchange until the very end of the day and my husband out all day, I thought I’d have an easy day, but it was a relentless and exhausting round of chores, not made easier by my daughter’s huge quantity of homework. My son got home with the neatest suitcase I’d ever seen – it was full of dirty clothes, but they were packed immaculately. It was lovely to see him again and to hear his many tales about his trip. 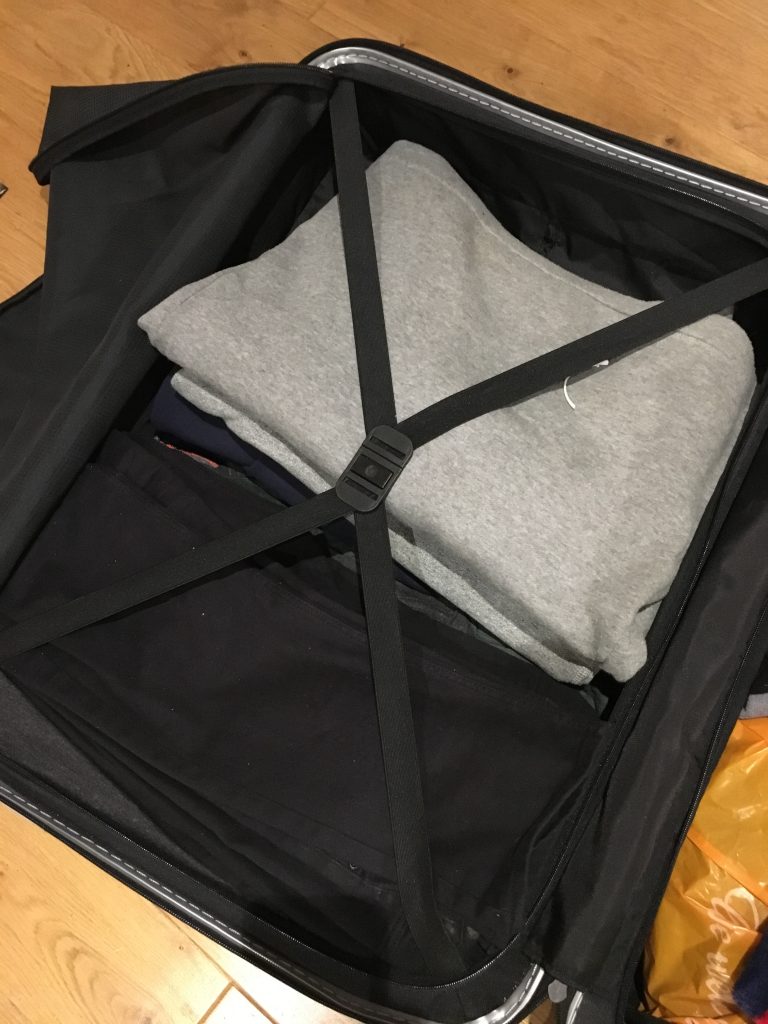 Day 57 – Monday 26th February – try as I might, I couldn’t get my younger son out of bed for school. After half an hour and with a lot of tears shed (his), I realised I was on to a losing battle and left him to sleep. It turns out nearly all of the kids on the German exchange went into school late and some didn’t go in at all. I went to watch him play football after school and they won for only the second time, although he didn’t score. It was snowing as they played and I got so cold. One of the reasons I hate the cold is it does this to my hands – I have about 30 cuts on each. 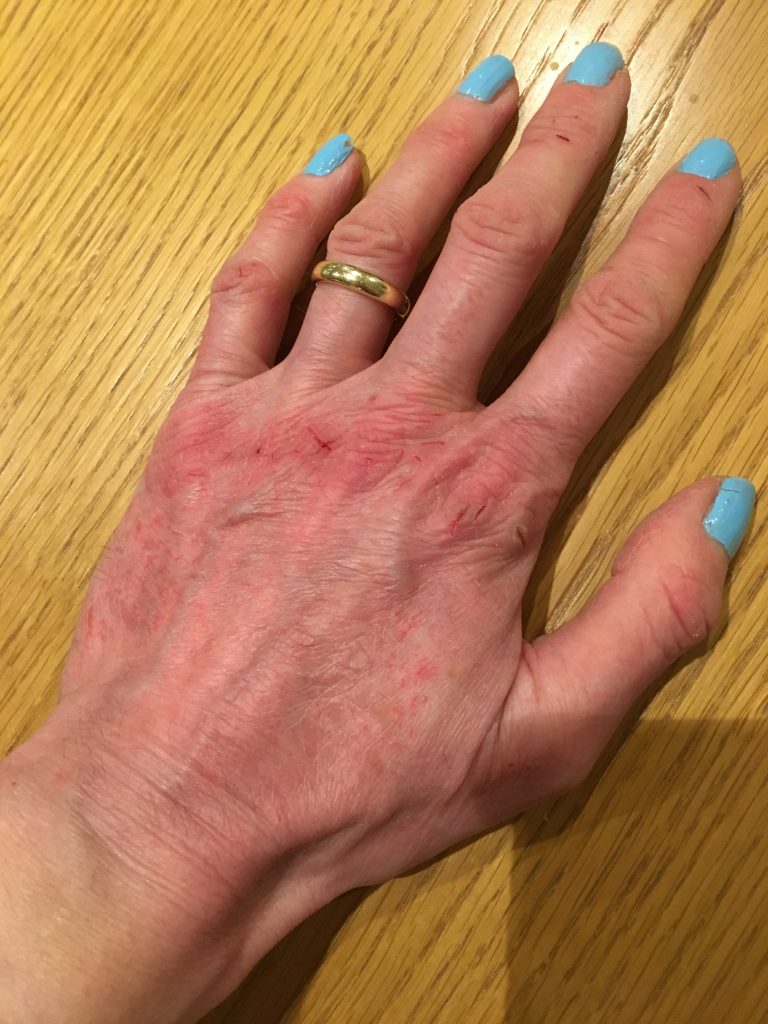 Day 58 – Tuesday 27th February – we woke to a light dusting of snow and it snowed on and off all day. It didn’t settle apart from this one very brief, but very heavy snowfall at around 5pm. 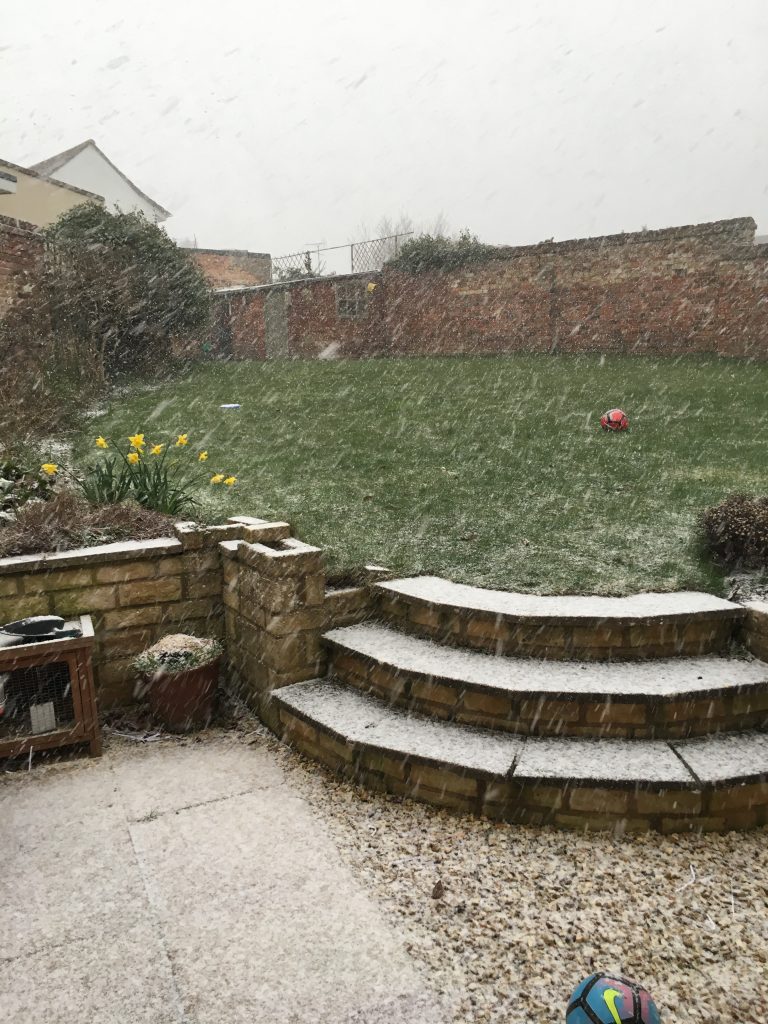 Day 59 – Wednesday 28th February – goodbye pink bathroom! This is a last glimpse of my horrible old 1980s ensuite, as work started on replacing it today. As you can see, my husband couldn’t leave it all to the professionals and had made a start on pulling it apart. In other news, I got a puncture on the way to school, which wasn’t a lot of fun. 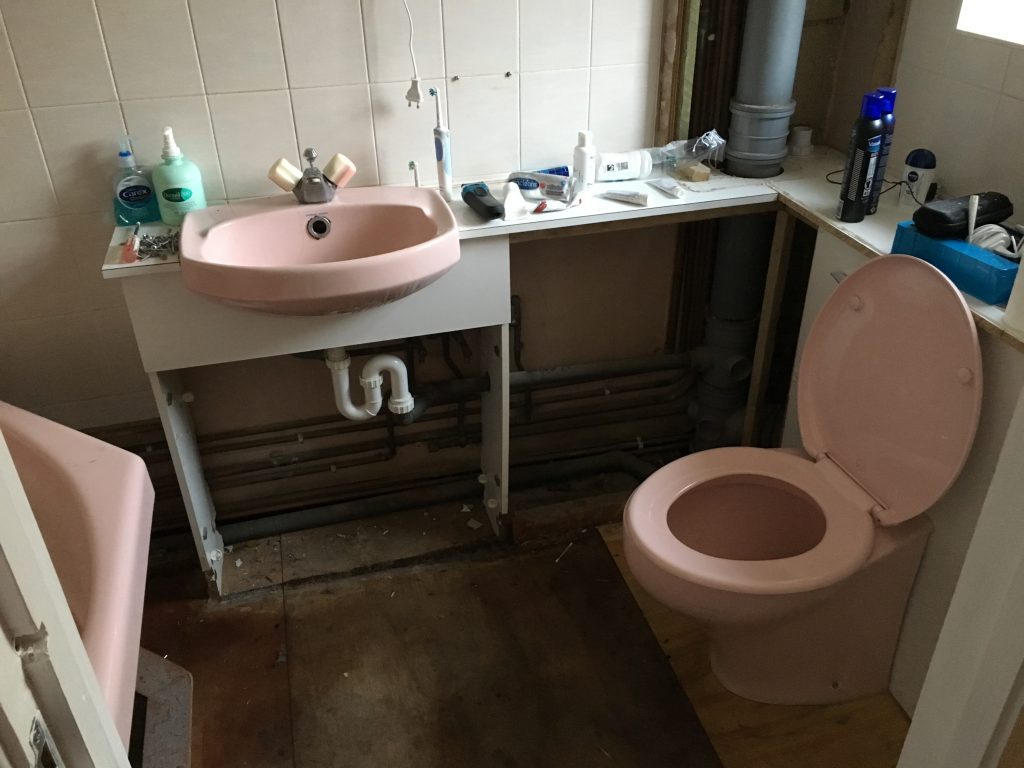 Day 60 – Thursday 1st March – it was forecast to snow non-stop from 10am, but it actually started at 7am. It was non-stop, but it settled very gradually. The wind was bitterly cold and the temperature didn’t get above about minus 4 all day. My younger son was late for school for the first time in 10 years as my car wouldn’t start. The bathroom man didn’t come for fear of being unable to make it home again and my daughter wasn’t happy because nearly everyone from her school went home early, but the buses weren’t running early, so she was stuck there. This is how my ensuite is looking now – a completely bare shell. 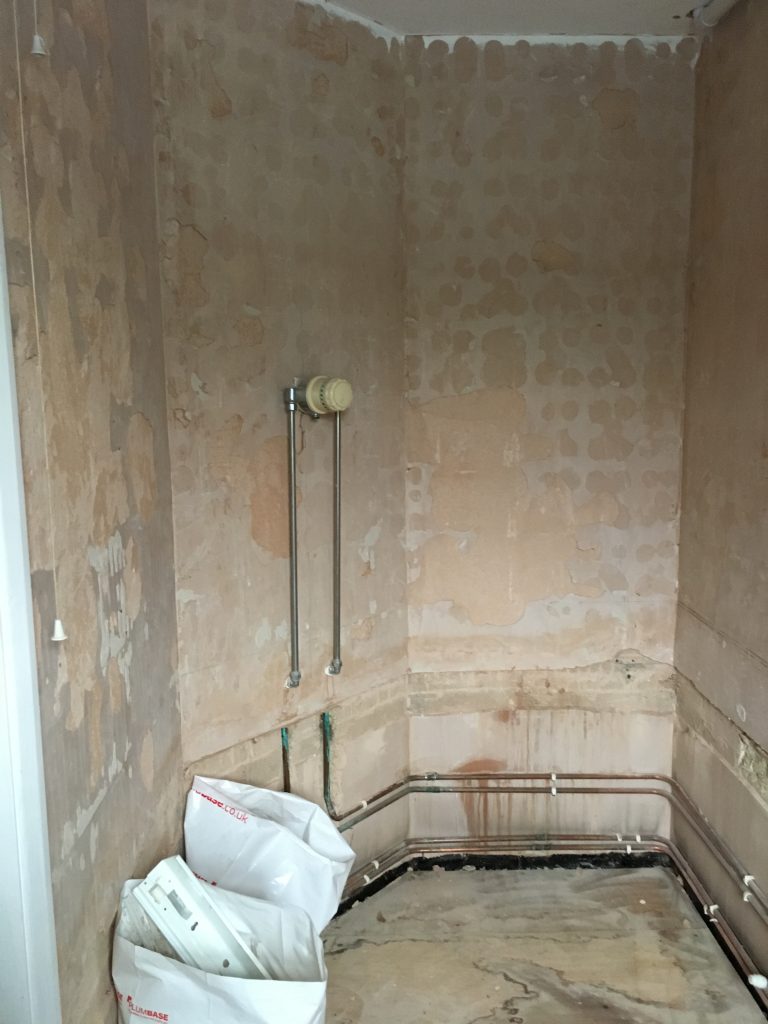 Day 61 – Friday 2nd March – school was off for everyone and we finally woke to some properly thick snow. I got out early to walk in it and take photos. I might be 44 years old, but I have this compulsion to put my feet in snow before anyone else! Somehow I didn’t manage to make it out into the snow at the same time as my kids, as they went out when I was working and didn’t want to go out with me again later. 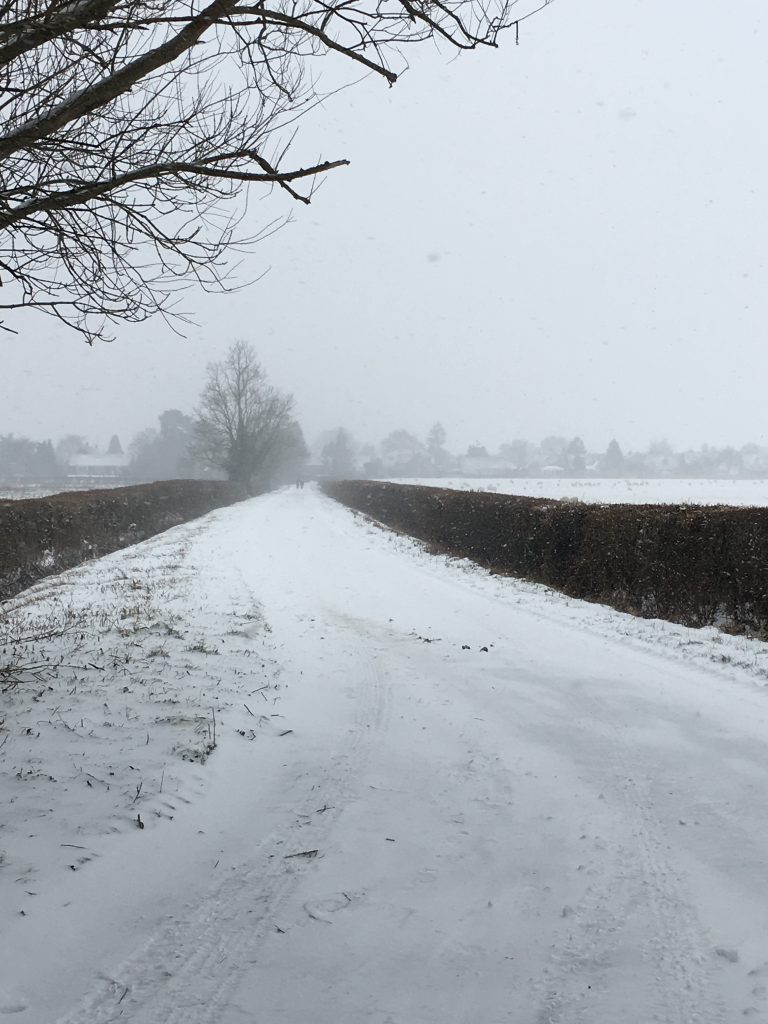 Day 62 – Saturday 3rd March – needless to say, Parkrun was cancelled as the snow was still very thick on the ground. That’s only the third time I’ve known it cancelled in the nearly three years I’ve been taking part. No doubt today we’ll be out in the snow, although unfortunately we don’t have a sledge. So I’ll just share a snowy picture from my garden in the meantime. 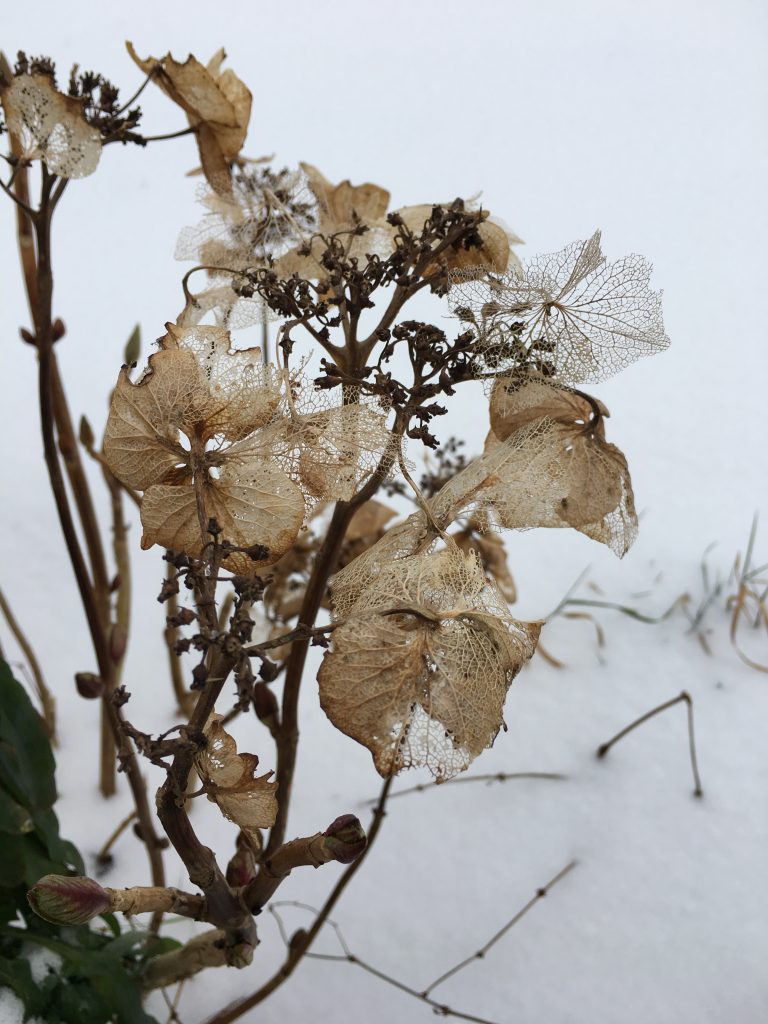