It’s not easy finding ways to amuse a family when you’ve got three big kids. They want to do different things and go different places. They all prefer different sports or just spending time starting at their phones.

But sometimes you still have to make that effort to relax and do something together. We don’t play them very often, but at Christmas and on holiday, you can find us playing board games and card games. We’ll usually be in fits of laughter. Someone might be trying to cheat, but it’s all good-natured.

We like to get a new game every couple of years as we adapt to our growing kids and I like to buy a new one for my parents too. So I was very happy when Ginger Fox asked if my family would like to join their Ginger Fox Games Club. It means we’ll get a couple of new games every quarter – and they’ll be suitable for families with teenagers too. 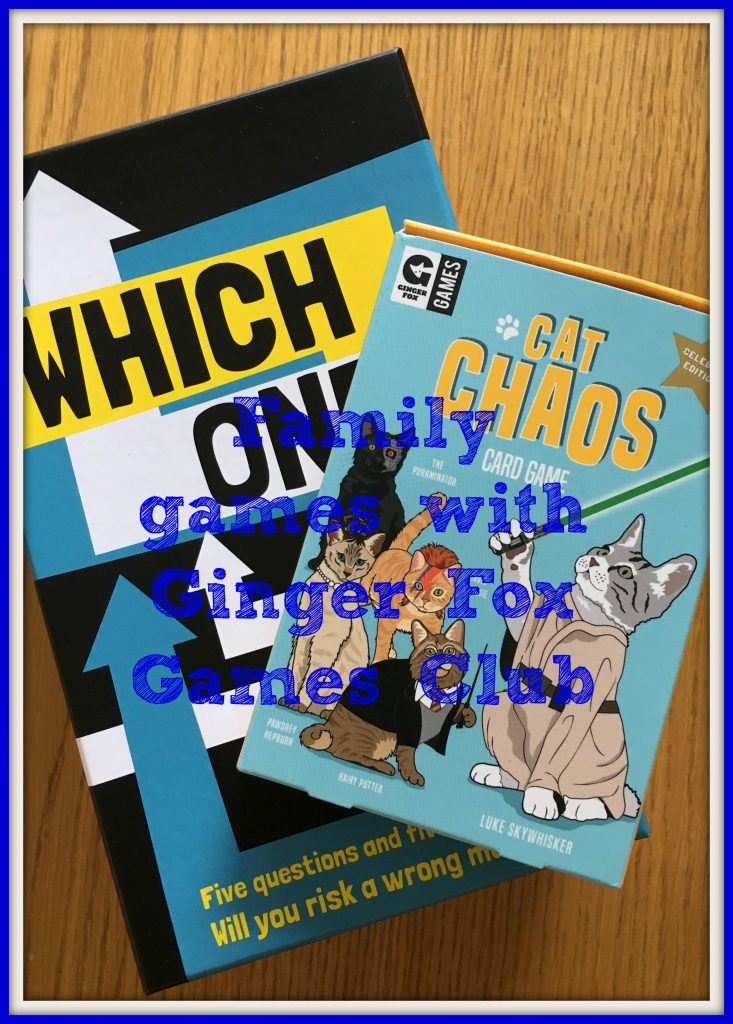 For our first mailing, we received Cat Chaos and Which One?

Cat Chaos is similar to happy families, but with celebrity cat characters, like Catrick Swayze, Katy Purry and David Meowie. It’s recommended for age 8+ and between two and eight players. To collect your sets of matching cards (‘cat-suits’) you exchange them through a pile in the middle. It’s relatively simple to play with two players, and my daughter and I both enjoyed it, but it really must be chaos with eight players. Even increasing our sets of cards from three to four each made the game longer and more complicated. But it’s one of those games a couple of kids can pick up and play easily if they’ve got 15 minutes to spare. 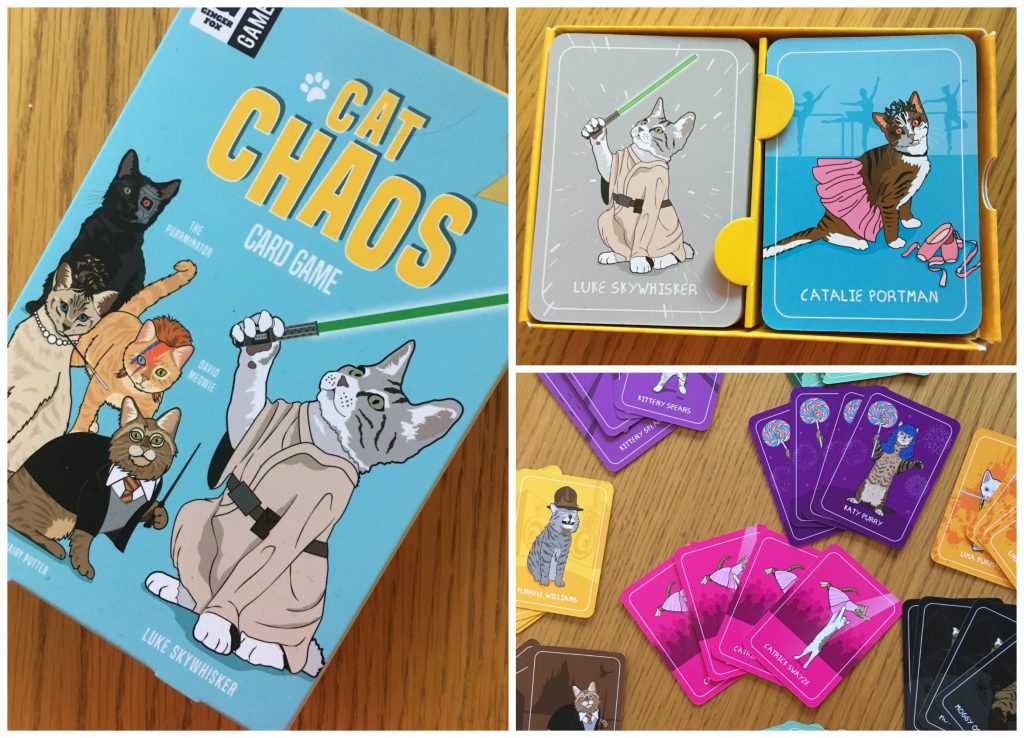 Which One? is a general knowledge/ trivia game which can be played by by one or more players. The recommended age is 14+. I didn’t find any inappropriate questions, the age rating is more based on the level of knowledge a player would need. I played it on my own and I’m pleased to say I beat the game, but it was probably through more luck than judgement. I discovered I have good knowledge of video games (something to do with my younger son no doubt) and districts and suburbs of major British cities (how geeky?!), but my knowledge of US TV series is, not surprisingly, dire.

Although playing on my own was reasonably enjoyable, this is definitely a game to be enjoyed with three or four players giving a real element of competition. I can just imagine how high the volume would get my when my two sons start getting competitive. 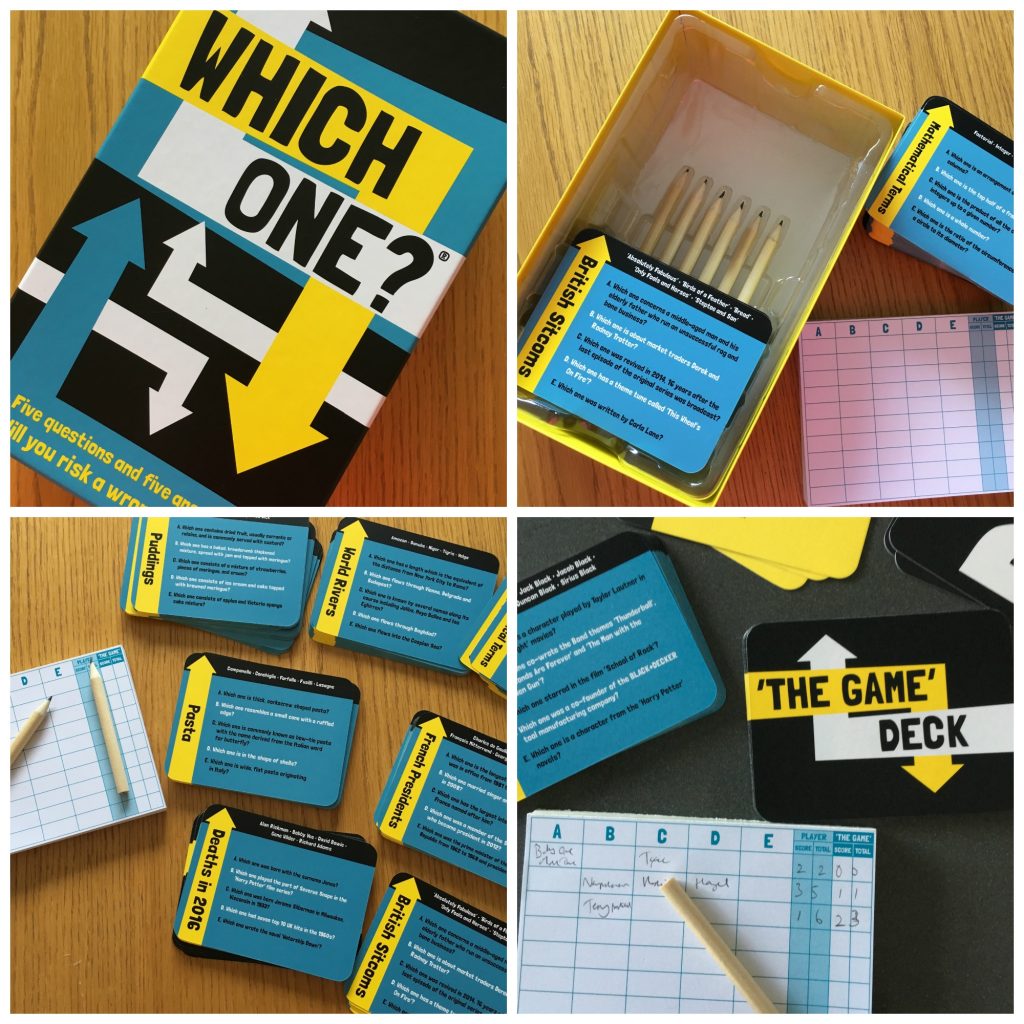 Both games are available from John Lewis – Cat Chaos retails at £8 and Which One? at £18. They would both make excellent Christmas presents.

We received Cat Chaos and Which One? from Ginger Fox for the purposes of this review. All our opinions are our own. 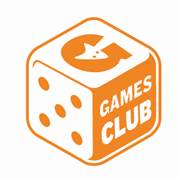