It felt like a long time since I’d last seen the panto. Both my family and my in-laws decided to go to see it towards the end of the run and it had been a long wait to see it again. My younger son hadn’t even seen it at all. But on 29th December, the four of us went to watch with my parents, my sister, my brother-in-law, my niece and my little nephew.

As we arrived, an usher asked my younger son how old he was – he was looking for kids to go up on stage later. Needless to say, my son was too old.

Seeing my niece on the stage would be the funniest thing ever.

Fair enough, my niece could be pretty unpredictable.

So we settled down to watch the show. It gets better every time I see it. Partly because I know the story and the songs better and see things I might have missed first or second time around, but partly because the actors are really settling into it. There are a lot more funny ad-libs.

If you’re a man, sitting on the end of the row on stage left, you could be in trouble. Because the dame likes to find herself/ himself a man there. My husband didn’t sit on the end. We managed to con my dad into sitting on one of the end seats, but couldn’t persuade my brother-in-law to sit on the other one. When the dame walked up the aisle looking for a man, she told my dad he was nice, before settling on the lap of the man in front – another older man. It’s hysterical to watch her in action right in front of us and even funnier knowing that could have been my dad.

But the attention on our family didn’t stop there…

Towards the end of the show, they drag an audience member on stage to be a ‘lawyer’. They ask if there’s a lawyer in the house, but clearly the person they drag up isn’t a lawyer.

My dad was a lawyer.

So my daughter had put in a good word for him and told the actor exactly where he would be sitting. When they asked for a lawyer, we all started pointing frantically at my dad, and he was picked. I don’t think I’ve ever laughed so much in my life.

My dad is a very quiet, serious, proper kind of man. But he’s also a good sport. He threw himself into being the lawyer and didn’t just stand there squirming and feeling embarrassed like most people. None of us could stop laughing. I could barely breathe. My very proper dad standing up on stage with the baddies grabbing onto his legs. It was too funny for words. Where else could that happen, apart from panto?

And then it was time to get the children on stage…

And somehow, despite being too young, my niece was one of the two girls. And somehow there were five boys instead of two. It’s so gloriously unpredictable.

My niece is a character. She looks like butter wouldn’t melt in her mouth and I love her to bits. She’s highly intelligent and rather unpredictable. She’s one of those kids you can’t take your eyes off for a second. You never know what she’s going to do next.

And she was going on stage. What could possibly go wrong?

The other kids on stage were aged between 5 and 10. The actor asked the usual questions about what they got for Christmas and who was their favourite character in the panto. My niece answered so clearly, you never would have guessed she was younger than the others.

Then the chorus gave them musical instruments to play. My daughter took two instruments on, but didn’t get to hand one to my niece. Strangely, my niece didn’t even seem to notice her cousin. Which was possibly for the best.

There was a triangle, some jingly bells and a little horn.

But what did the unpredictable 4 year old get given?

You couldn’t make it up.

Anyone who knows my niece would never give her a big bass drum.

I literally thought I would die from laughing. None of my family could breathe. We were in absolute hysterics (apart from my little nephew who was confused and just wanted his sister back).

Apart from the bit where she was told to bang it. Then she went silent.

When they pick kids to go on stage, they want ones that will be funny. They hit the jackpot with my angelic looking niece.

It was the best panto ever. And my daughter? She was brilliant too, but it will always be remembered for being the panto when my dad and niece went on the stage. Nothing will ever top it. 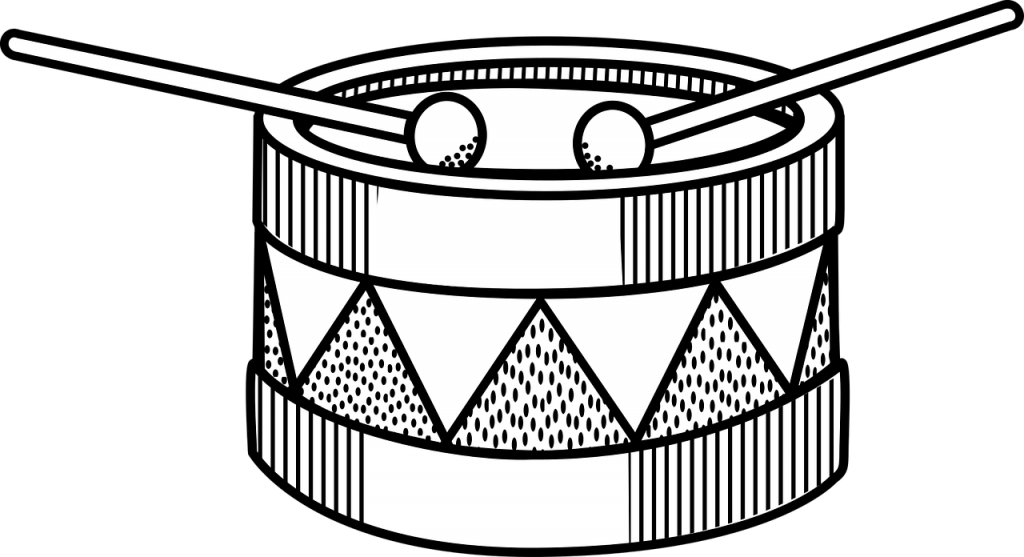 The drum my niece had was much bigger than this…