It was a few weeks before Christmas that my wrist began to ache when I brushed my teeth. I didn’t think much of it, other than that I was probably getting old. Wrist ache wasn’t something I’d had before, but it just felt like a symptom of being 42.

It had ached for about a week when I was horrified to spot a lump on the inside of it. Had it been there all week and I just hadn’t noticed it? Or had it just appeared that morning? I’ll be honest, I was freaked out, so I did the only sensible thing I could do at that time of day – I tweeted and asked if anyone had any suggestions for non-scary reasons why I might have a lump on my wrist.

I immediately got two or three replies saying it was probably a ganglion. I googled and, sure enough, there it was. It was textbook. There was no question it was anything other than a ganglion. The only difference was I had a double lump on mine – a larger one, with a smaller, round one on top.

I discovered that a ganglion, or ganglion cyst, is a fluid-filled swelling that usually develops near a joint or tendon. They range from the size of a pea to the size of a golf ball. I read that they are harmless and are often painless, but if they do cause discomfort they can be treated – either removed surgically or drained, which is clearly easier and less invasive. They may disappear without treatment, but this could take several years.

Apparently, back in the old days, they used to get rid of them by hitting them with the family bible. Having discovered a range of things which make it hurt, I can’t begin to imagine how painful that would be. The kind of pain that could cause you to pass out, I reckon.

The ganglion was uncomfortable or ached when I wiped things ie cleaned the kitchen or bathroom or when I carried anything too heavy. I couldn’t put my own body weight on it, so I had to stop some of the stretches I’d been doing after running to prevent my injury coming back. It particularly hurt when I cleaned my teeth, so I tried cleaning them left-handed, but that was impossible.

So, according to the NHS website, I should have been able to get treatment for it. I went to the GP, who agreed with my Twitter and Google diagnosis of a ganglion, but who told me that they don’t treat them, because they usually come back.

So I was just going to have to put up with painful teeth cleaning and not being able to do my stretches. I was slightly disappointed, but was also kind of glad that I wasn’t going to be putting a further strain on NHS resources.

Since then, the discomfort when cleaning my teeth has eased and I’ve got used to not carrying anything heavy or putting too much weight on my wrist. But, having caught it on the strap of my handbag, a pain which brought tears to my eyes, I can confirm that the ganglion is definitely still a problem. Sometimes it aches in bed at night and it’s hard to find a neutral position to stop it hurting, which is also comfortable enough for sleep.

It has changed shape since I first got it – the larger bit has got smaller and the round bit has got more prominent. I live in hope that this is a positive sign that it might be improving and I won’t be one of those people who has it for years. 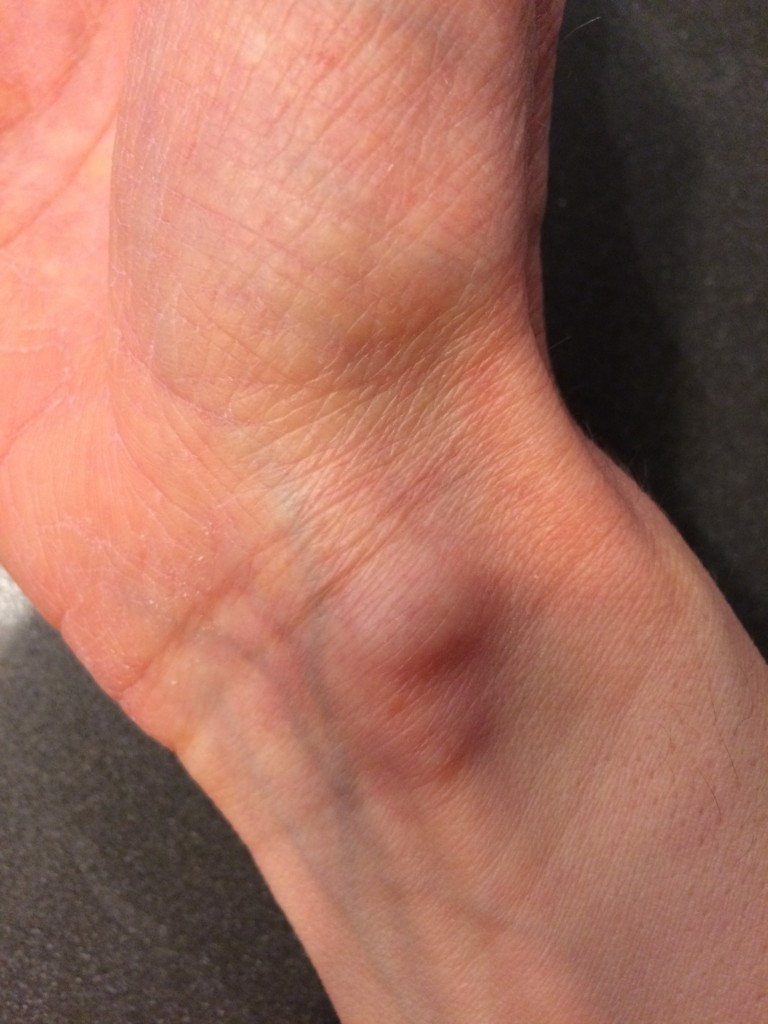