A trip to Alton Towers

I’m just going to put it out there. I don’t like theme parks. I like nothing about them – the rides, the queues, the crowds, the unhealthy food, even the smell of them. I just don’t like them!

I liked them when I was younger. Back in my early 20s, my husband and I used to go to Alton Towers every year. I remember when we went on Nemesis six times. We’d drunk a lot of fizzy drinks and eaten donuts too. That was a distinctly queasy journey home. Maybe that was what put me off. I’ve also got more scared of things as I’ve got older. I want to protect my kids and myself from danger – because who would look after them if I got hurt?! Irrational, I know. These rides are tested and perfectly safe (well, there’s The Smiler of course that proved that’s not always the case… ).

I like Disneyland Paris and Legoland because they’re less about the rides and more about the theme. But Disneyland Paris is a) in Paris and b) expensive. I don’t know if we will ever go there again. The last time we went to Legoland, my family concluded they were too old for it, which is a shame.

I’ve been to Drayton Manor. I didn’t like it. Apart from Thomas Land and, you’ve guessed it, my kids are too old for that. I’ve never been to Chessington or Thorpe Park, but I suspect I wouldn’t like them either.

We went to Alton Towers about five years ago. I spent the whole time looking after my moaning daughter who couldn’t go on any rides. Before that, it was over 15 years ago. But my husband was desperate to go and to take the kids, now they’re all over the magical 1.4 metres (some of them WAY over – all of a sudden my eldest towers above me). We were going to go for his birthday earlier this year, but then The Smiler incident happened and he took the decision to give it a miss.

So, on a rainy day in October half-term, the day I’d been dreading finally happened. I was actually counting down until it was over. We’d had a boring week, but that didn’t mean I wanted to go to a theme park.

I took a decision earlier this year that, now my kids are older and I have no excuse to wait with the younger ones/ hold the bags, that I have to be brave and join in. It’s too easy to fall into that mum rut and before you know it you’re 60 and you realise you haven’t joined in and had fun for the last 30 years. So I was determined to go on the rides (even though I really didn’t want to!). I just drew the line at one thing. The Sky Ride. You know, the cable car that takes you from one part of the park to the other? Totally tame. Unless you’re a claustrophobic.

One minute I was taking a photo of a pumpkin, the next minute I was running to keep up with my family and the next I was on the Sky Ride. I was so cross. The second the doors shut, I started to panic. I wasn’t supposed to be on there! What if it got stuck? I tried to get off, but it was too late. I had to practise my breathing exercises and look at videos on my phone until it was over. (Later in the day, I did see it not moving. I would have wanted to die if I’d been inside.) 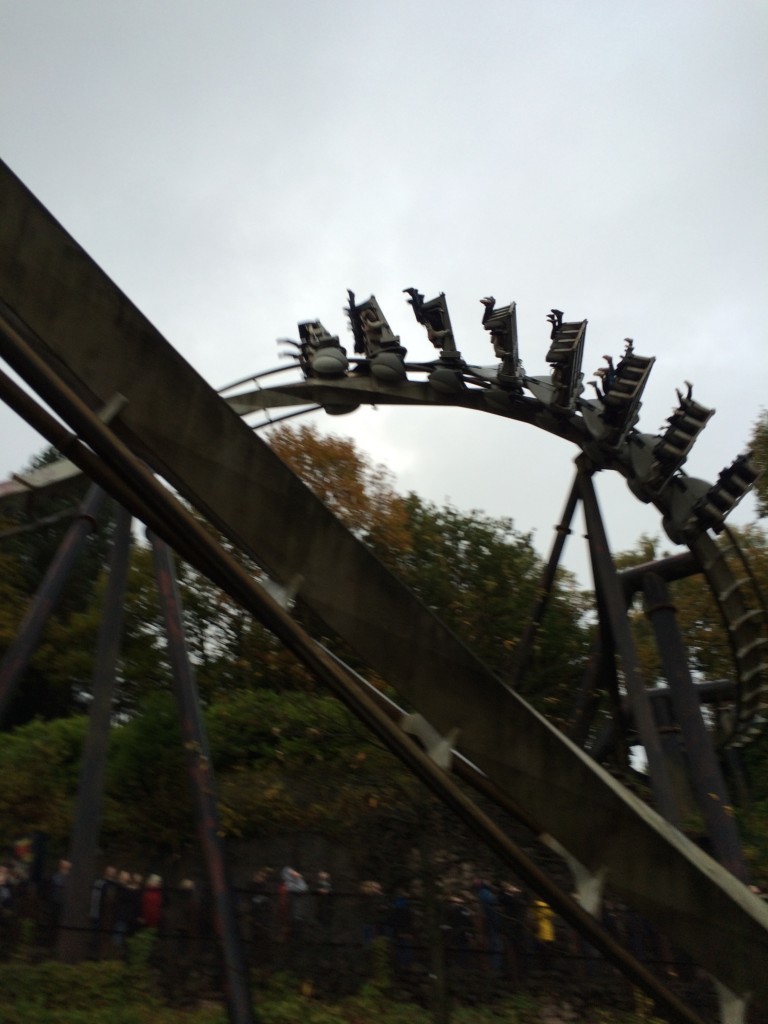 Then my family were running again to get on Nemesis. Before I knew it, we were on. I used to love Nemesis back in the day, but it’s safe to say I didn’t enjoy it at all. My heart was still racing from claustrophobia and I wasn’t ready for it. My daughter (the travel sick one) was shouting and laughing ‘It’s awesome! It’s awesome!’.

Then they sprinted off to Air – the ride where you’re lying down and ‘flying’. Arriving as the park opens on a rainy day in October means the queues are non-existent, so we were at the front before we knew it. I was feeling physically and emotionally shaken by the Sky Ride and Nemesis and didn’t want to be hanging upside down. I decided to give it a miss. The kids, especially my younger son, loved it.

The menfolk were all eating crisps and my daughter was hungry, but I wouldn’t let her eat as I was worried she would feel sick. I didn’t want to feel sick myself, so also went hungry.

We trekked across the muddy valley in the beautiful autumn leaves to get to Rita and Oblivion. I loved Rita. It was very fast and very short – no time to feel sick or scared. I’ve been on Oblivion before, back in the day, and hadn’t found it too bad. It was the one ride that scared my husband a bit! The rain poured and there was actually a queue, then the ride had to close temporarily. My daughter was a bit scared, but I think we all enjoyed it. 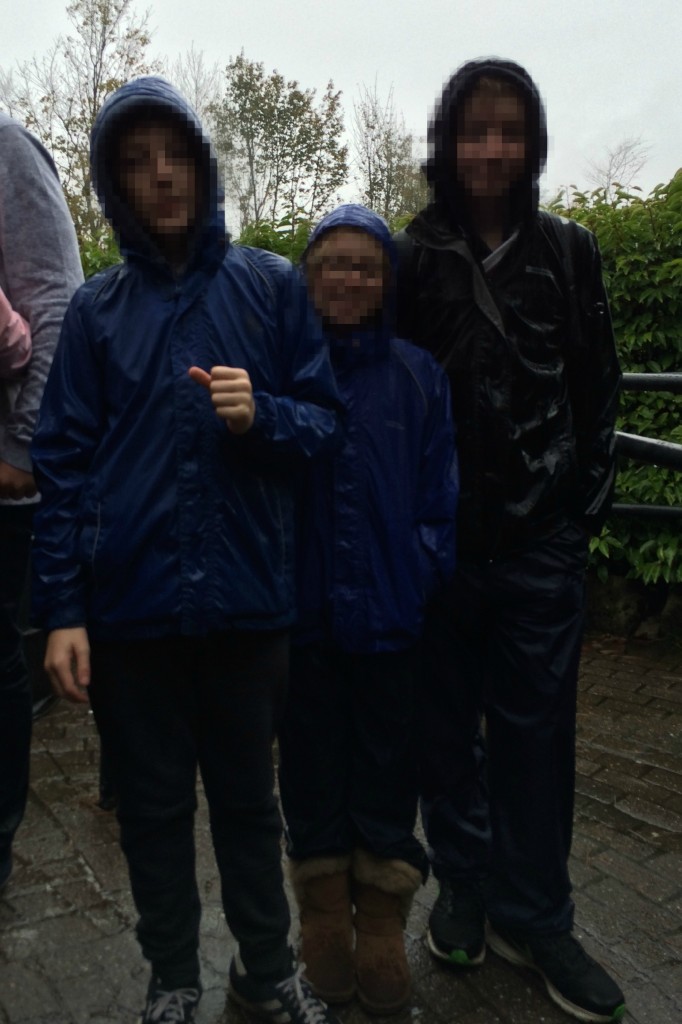 Then another trek to find some food – avoiding the theme park staples of chips, burgers and fizzy drinks. We found a place doing Mexican wraps, which felt much healthier. I was impressed you could actually have water as part of your meal deal.

After lunch, the kids just wanted to do it all over again. There was no way I was going on Nemesis again, but the kids went on twice more. They weren’t so keen on Rita (typical as it was my favourite!), so gave that one a miss in favour of Air (which I avoided again) and Oblivion.

It was dark by the time we left. The kids had had a brilliant day, despite the fact that it had rained non-stop. It wasn’t as bad as I’d expected, but it wasn’t my favourite day ever. I was pleased that none of us felt sick and we’d managed a day without junk food, but I’m in no real hurry to go back!