The Love Song of Miss Queenie Hennessy by Rachel Joyce

I loved The Unlikely Pilgrimage of Harold Fry, which I read a couple of years ago, so was very excited when I spotted The Love Song of Miss Queenie Hennessy in Waterstones (and I had the Christmas vouchers to spend on it!). It’s described by the author as neither a sequel or a prequel to Harold Fry. It is, like Harold and Queenie themselves, a companion to sit alongside it.

Queenie was almost invisible in Harold Fry. We knew she had worked at the brewery with Harold, but we didn’t know much else. What was it about this woman that motivated Harold to walk over 600 miles? Harold was a married man, what would make him leave his wife for so long and why would his wife accept it?

This is Queenie’s story in her own words. It is two stories running alongside each other – Queenie’s life as she remembers it – her childhood, her time working at the brewery with Harold and her life on the Northumberland coast in her beach house – but it is also her story in the here and now. Queenie is dying and is in a hospice, cared for by nuns. In my head, I’m seeing the care home on Derek run by the nuns of Nonnatus House. She describes day to day life with nutritional drinks, the characters that surround her and the endless visits of the undertaker’s car.

I must admit, at first I was slightly disappointed by the book. But it soon drew me in.

I wanted to know more about the secrets Queenie had kept from Harold and was now ready to confess to him. Would she finish her story in time? How would he react to what she told him? I loved the descriptions of life in the hospice, and particularly of Finty, whose every sentence was peppered with swear words, despite being in the presence of nuns.

It’s not the kind of book which you expect to have a twist. But there was one right at the end, which took me completely by surprise.

This is a lovely book and well worth a read. It would make a good read on its own, but is even better if you’ve also read Harold Fry. 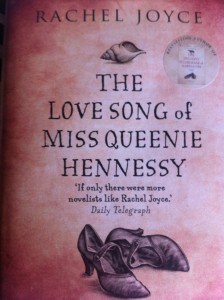