Running with the kids

Home » Family » Running with the kids

On holiday in Padstow and with my half marathon training a little behind schedule, I knew I had to run the Camel Trail from Padstow to Wadebridge. From our holiday house, right along the trail, with a quick loop around Wadebridge and back again is somewhere between 11 and 12 miles. Having only done one 10 mile run and having not run for a week (damn you, summer holidays!), this wasn’t going to be easy.

So why not make it a bit easier by chucking three kids wobbling around on their bikes into the equation? This would be the first time my daughter had cycled the Camel Trail on her own – having been on a ‘tag-along’ bike thing attached to Mummy or Daddy’s bike for the last few years.

The plan was to set off at 7.15am, but they weren’t ready. At 7.30 there was torrential rain. I’ve run the Camel Trail in torrential rain before and was in no hurry to repeat the experience.

At 8am we were finally pumping tyres and raising seats – my younger son rides his bike twice a year, in Padstow and Center Parcs, and has a 20inch one, the same size as my daughter got for her 6th birthday. He also has the helmet he had when he was 4, which hardly fits any more.

I started running and they started cycling – with strict instructions not to run into me or cycle too close. After a minute Daddy stopped to pump up his tyre and the younger two stopped with him. I wouldn’t see them again for nearly a mile.

Just outside Padstow, my eldest saw the sign which says ‘Wadebridge 5’.

‘You DO go a long way, don’t you?’ He says in that special tone of voice tweens reserve for the rare occasions when they are impressed by the achievements of someone other than themselves. He knows I’ve run the Camel Trail on our previous two holidays and he’s cycled it every year of his life (OK, he was in a baby trailer for the first few years), so he shouldn’t really have been surprised.

The others caught us up and the boys shot off. The next thing I saw was my eldest standing up and his bike lying in the ditch – he’d fallen off. He’d turned his head to see how far behind everyone else was and sent himself off balance. Luckily he wasn’t hurt – or even wet.

Then they all shot off and they were gone. I wasn’t running with the kids, I was running on my own.

With so few landmarks (the Camel Trail is a disused railway turned into a footpath and cycle path running alongside the Camel estuary), running there is psychologically quite tough. There is nothing to look at and really no indication of how far you’ve gone and how far you’ve got to go. And not even a glimpse of my kids in the distance. Surely I’d catch up with them soon? Surely they’d be waiting for me in Wadebridge? 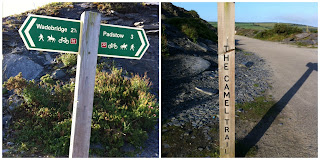 I ran off the trail into Wadebridge, looped round to town, past the bakery they like and there was no sign of them.

So I phoned them as I ran. No answer. I phoned again. By this time I was back on the trail and heading away from Wadebridge. Still no answer. I heard a distant scream. What if it was my daughter, fallen off her bike into a ditch?

I realised I was listening to a Take That live track. Running can do funny things to your mind.

When you know your family should be nearby, but you don’t know where they are, it’s far worse than running on your own. Running on my own is normal to me and I know the kids are safe at home. Even though I knew they were with Daddy, I was still worried. Phone reception is pretty poor – if one of them had fallen and hurt themselves, would I even know?

About halfway between Padstow and Wadebridge are loads of rocks – they are the most obvious landmark on the trail. From here you can see Padstow in the distance. It looks tantalisingly close. It seemed like a good thing for a minute or two. But then I wasn’t sure if it was better or worse than coming into Wadebridge and not knowing how near you are. 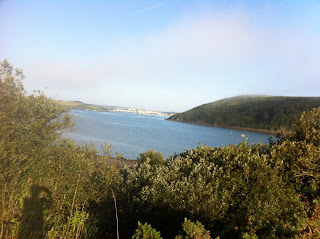 That white patch is Padstow from the rocks three miles away

By this point EVERYTHING hurt – my hip, my groin, my ITB (band running up the outside of the knee, an old injury from two years ago), my toenails and the soles of my feet. I desperately wanted to get back, but seeing Padstow all the way and hardly getting any closer was soul-destroying. It was a hard three miles.

And the kids never caught me up.

I was lowering myself into my freezing cold bath when my eldest came in. Daddy and the younger two were a few minutes behind. My daughter had found it fairly tough, but she’d enjoyed it. She’d cycled 12 miles in just over two hours, which isn’t bad for a seven year old.

It was a different experience, but I’m not going to bother running with the kids again. I’m going back to running one own.