What’s in a name?

Your name is with you all your life. As parents, you owe it to your kids to get it right. Names are special and unique. People grow to fit their names, or their names mould to fit them. Choosing a baby’s name is one of the most exciting things you can do. I never understand those people who have babies then wait a week or more to name them. They’ve had nine months to prepare! But then again, it’s a big decision. You want to make sure you get it right.

How did you name your kids? Family names? Fashionable names? Something unusual? Something traditional?

This is how we named ours…

I had a girl’s name planned in 1996, when I saw a little girl on Le Shuttle, of all places, with it on her jumper. It seemed such a beautiful name. Traditional, but a little bit unusual too.

We planned to try for a baby as soon as we got married in 2000, so we did. We hadn’t thought about boys’ names before this, but we started to think. We’d watched a particular programme obsessively in the run-up to our wedding. It was on TV every day. We set two videos (remember those?!) to make sure it recorded while we were away on honeymoon (and it worked!). In the programme there was one child character. He was a little bit quirky. His name seemed a bit quirky too, but, again, quite traditional. That was our boy’s name.

I knew all along I would have a boy (although we didn’t find out). The bump had the name off the TV and so did the baby when he was born in June 2001. As it turned out, the name wasn’t particularly quirky. You don’t really realise which kids’ names are fashionable until you actually have kids.

I named my second son within days of my eldest being born. The name was in a book I read probably less than two weeks later. Again, it seemed a bit quirky. In the couple of years between the boys, the name grew in popularity. After I’d had my son, its popularity exploded. It is now a very popular name. Popular, not common, I like to tell myself.

As it happens, the name was also my Grandad’s name, but he wasn’t really named after my Grandad. They used different parts of the name, so it never felt the same. But I’m sure my Grandad who was lucky enough to know both of my boys, but not my daughter, was pleased. My younger son has grown up into just the sort of boy my Grandad would have adored – fun-loving and always laughing.

When I was having my younger son, our future daughter’s name changed temporarily. My husband had gone off the special name from the girl’s jumper, so we were going for a very similar name. I’m so glad he was a boy, because by the time we had my girl, we were back to my favourite name.

And so my daughter got the name I’d loved for the 10 years before she was born. It suits her so well – beautiful, traditional and just a little bit unusual.

All of our kids have two middle names, so they could have one from each side of the family, but also because I always thought having two middle names was the height of cool. Both boys have their long-dead grandfather’s name as part of their middle name – the father-in-law I never knew. Both their cousins and a second cousin have it too. He was a popular man, gone way before his time.

I was inspired to write this post after reading one by over40andamumtoone who wrote about names recently. After leaving a very long comment on her post, it occurred to me this was a subject I’d never written about myself. So I decided to rectify that situation! 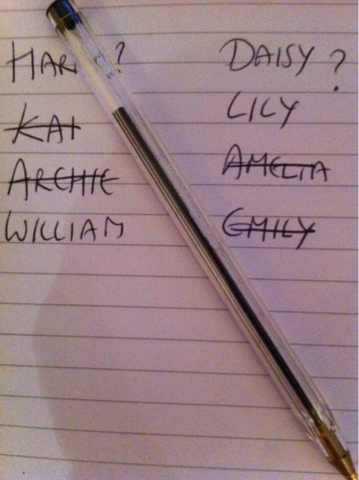