Have you ever heard of abdominal migraine? I hadn’t either until a couple of weeks ago.

One Saturday afternoon my younger son complained of stomach ache. He wasn’t sure, but he thought he might be hungry. He started eating his tea and the pain didn’t go away, it got worse, even though he was still hungry. So he lay on the settee.

I could see how much pain he was in. He wasn’t aware of it, but he was bending and stretching his legs and clenching his toes like a baby with colic. The pain got worse and at times it made him cry. He wouldn’t let me leave him, so I just sat with him, talked to him, read to him and held his hand.

He wasn’t sick and he didn’t have diaorrhea (no, I never know how to spell that word, but you know what I mean). He didn’t even feel sick, but he was hurting badly. It takes a lot of pain to make a 9 year old boy cry.

At the back of my mind was appendicitis. Now I know nothing about appendicitis and the symptoms, other than that it’s really bad stomach pain. And if you have that you need medical attention straight away! I didn’t want to be rushing him to the out of hours doctor or A&E for nothing, but nor did I want to take any risks.

So I did an NHS symptom checker online. It came back inconclusive and said I would get a call back within two hours. I got the call back TWELVE HOURS LATER. At 5.40 on a Sunday morning. Didn’t they think that by then either he would have got a lot worse or better and maybe I might have found my own solution which didn’t involve being woken by the phone ringing before 6am?!

The pain eased off a bit and then it got even worse. So I rang my friend who is a doctor and lives round the corner. We don’t take the p*ss, we’re not forever phoning her. But I know she doesn’t mind taking a look at the kids if we’re worried about something. I think this is only the fourth time I’ve called on her services in the seven years I’ve known her.

She came straight round and checked my son thoroughly. She could see the way his legs were moving and how he reacted to her touch. She said it was almost certainly abdominal migraine which, like its more well-known head version, comes and goes and some people are prone to it. She said it could be relieved with paracetemol and ibuprofen, would probably last a few hours and would be likely to return.

Just as soon as it came, it went. It had been with him precisely four hours and he was able to go to sleep as usual. The next morning he was 100% and played rugby.

Last Thursday he had stomach pain in the morning. He put it down to nerves at playing Henry VIII in the school assembly, but the pain didn’t ease after the assembly. It got worse in the evening just before bed.

On Friday, exactly the same pattern. Slight pain from 8am, coming and going all day and getting worse at bedtime.

My friend advised keeping a record of the duration of the pain – and of any possible triggers.

At 8am, there is only two things that could have triggered it – milk or Cheerios. Cheerios seemed pretty unlikely, so milk was the main suspect (especially as my daughter and I are both intolerant to dairy). He always drinks two cups of milk before bed, so this would fit in with it getting worse at bedtime.

He had no milk on Saturday or Sunday – drinking water or apple juice instead (and scarily already looking thinner because of it, even though he only drank skimmed).

But on Sunday evening the pain was back.  And again this morning before he’d even had breakfast.

Already since that first episode he is managing it better himself. He knows what the pain is and knows it will eventually go away. He also knows to take Calpol or ibuprofen to ease it. But stomach pain every day isn’t ideal for a little boy (or anyone). I’m making an appointment for the doctor’s this week to see if we can find out more. I’ll keep you posted on progress. 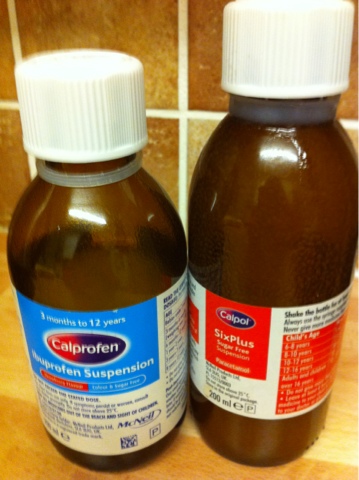