It may surprise you to read that I’m a keen photographer. I was taking loads of photos well before it became the norm. When my boys were 3 and 1, I took a photo of them sat in the trolley together at Tesco because they looked so cute. People were shocked.

‘You took a CAMERA to Tesco?!’

That’s how much things have moved on. No-one would bat an eyelid now. Everyone’s taking photos in Tesco. And everywhere else.

I only really take photos of one thing. Well, three things. My kids. We go on holiday. We see lovely views. I take a photo. I zoom in on my kids. And you can’t really see the view. I just can’t get enough photos of them.

I came pretty late to digital photography. I used films right until 2009 when I finally got a digital camera – a basic Canon SLR. This took my photography up to a whole new level. Now instead of one photo of my kids, with fingers crossed they’ve got their eyes open, I can take four of each pose. Just to be sure. If two kids are in the shot, I’ll take six. More margin for error. If all three of them are in, I’ll take 20. Just to get one really good pic.

Old habits die hard and after all those years of using films I just can’t, and won’t, stop printing my photos off. And sticking them in actual albums. I delete the not so good ones and print them off 200 a time and I get sticking.

Since I had my eldest, I’m on photo album number 80. It’s the 49th since my daughter was born. They’re the sort of albums which allegedly fit 200 photos – four to a page. But only if they’re all portrait. So realistically I’m probably fitting about 150 photos in an album, with each album lasting about two months.

I have two big shelves full of albums. I have a tall pile of around 15 albums next to the shelf and I have boxes under my bed whose sole purpose is to house my albums. As I write that down, I can see that it’s a waste of time and space. But it brings me pleasure. I like looking at my photos on the camera, on the computer screen and on Facebook, but it’s just not the same as seeing them in a big book. 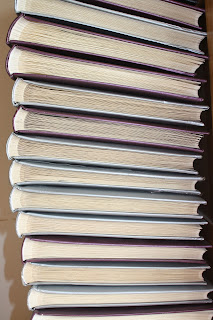 I take time over the arrangement. I will try not to mix two ‘events’ on a page and I will also get them in the right order and optimise the number of photos on the page. To be honest, when faced with 200 photos at a time, it’s not such a pleasure as it was when I just had 36. Sometimes I slack off, then I have a really good go at getting on top of it.

Recently I’ve sped through the months September to January. Even though my kids are big, it’s still amazing looking back and seeing the changes in that short space of time.

In September and October the kids had a slight tan. If you’d asked me if my kids tanned, I would have categorically said ‘no’. They were wearing Tshirts. There were leaves on the trees. Then the leaves turn yellow. The kids start wearing coats. The light changes. There are more indoor photos.

There are so many photos in December. They are dark, but they are happy and full of hope. School performances, the Christmas tree, our Christmas flashmob. It’s remarkable how much we did in such a short time. You can almost see in the kids’ faces how much they were looking forward to Christmas with no inkling that it was all going to go wrong Then the photos of my pale, listless children, ill with the flu, forcing smiles on Christmas day. It was tempting not to stick them in the album. Those are not nice memories, but they were our Christmas.

And finally to January. And it’s still dark.

The photos I’m taking now are already brighter, the days are longer and it shows in the kids’ faces. With my camera and photo albums we are keeping our memories alive.

Does anyone else still use photo albums? Or does everyone think I’m mad?