What she wore – Christmas flash mob

Home » What She Wore » What she wore – Christmas flash mob

Regular readers will know my daughter (and her mummy!) is a real dancer. Just before Christmas we took part in a flash mob in the town centre. We had to dress inconspicuously, so shoppers couldn’t tell there was a flash mob about to happen, but they also wanted us to dress Christmassy and wintry.

My daughter came up with this outfit herself. 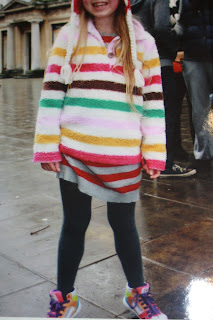 She’s wearing a red and grey striped M&S Peppa Pig jumper dress. She wears jumper dresses more than anything and currently has four of them on the go. I love that, at nearly 7, she still likes Peppa Pig and isn’t embarassed to wear Peppa Pig clothing – she chose it herself. I also love that M&S doesn’t force kids to grow up too quickly and does actually make Peppa Pig clothes in 6-7.
The fleece jumper is from Joules. Joules is pretty expensive, but she and her brothers have a handful of their clothes. They look good and they last well. The jumper is one of those things which she wears all year round – it’s as good for cold winter days as it is for coming off the beach in the summer.
The outfit is finished off with grey school tights and her dance trainers. The trainers are Next hi-tops. I don’t want her to wear this sort of trainers day-to-day as I think it’s a bit (whisper) chavvy, but they’re great for dance. 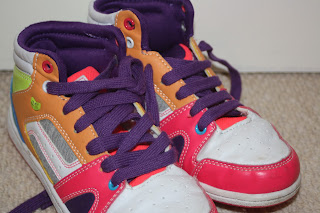 She didn’t have a suitable wintry/ Christmassy hat to top the outfit off, so I bought her this red heart hat from Next especially. It was a good buy as it’s not overly Christmassy and she has worn it a lot since. 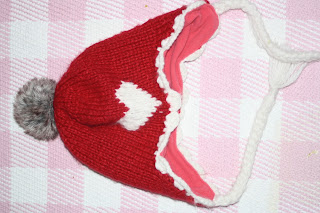