The first Red Nose Day for Comic Relief was held some 25 years ago, back in 1988. I was 14 and I still remember the excitement when my Dad brought home those very small, very round, bright red clowns’ noses for us all to wear.

There were noses for your car. There were subtle little pin noses for grown ups to wear on their suits.

And there was a really funny programme on all night, with a really lasting message.

And me on the phone pledging just another £10 because something else has made me cry. Because I’ve already bought noses for the whole family plus my car and a heap of other merchandise. I’ve sponsored a couple of people. I’ve paid for the kids to go to school in fancy dress or their own clothes. But none of it is enough.

Because people are dying in Africa. And kids in Britain are living in women’s refuges or are caring singlehandedly for disabled parents.

No amount of money can ever be enough, but by buying those noses we are doing just a tiny bit to help. And we know that every penny really does go to Comic Relief. Every penny not just of adults’ money, but kids’ money too. My daughter, like many other children, will happily give her pocket money because she is so moved by the plight of those children in Africa.

But there is joy too in those moving films. Because when those celebrities go to Africa for Comic Relief it’s not just to see people living in poverty and show us back at home. It’s to show how the money is helping – a well for clean water, mosquito nets to prevent malaria or a school.

It all makes a difference. And it’s all because we bought our noses. 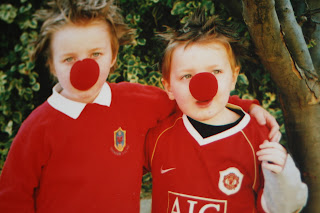 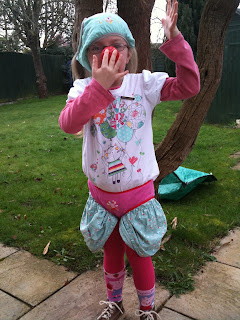 This is my daughter aged 5 (Reception) going to school in 2011. The theme was ‘dress crazily’, so she decided to wear pants on her head and over her skirt.
I wrote this post in response to the prompt ‘noses’ on The Gallery over at Sticky Fingers. Pop over to see how others have interpreted the theme.