I’m a proper grammar geek and I like to see words written properly and punctuation used properly. This is useful at work where I’m the go-to-girl for proof-reading. In a team full of grammar geeks aka ‘communications professionals’ I am Queen Grammar Geek.

I don’t like it when commas are in the wrong place. Or when they’re not used. But that is just a minor thing compared to some of my really big niggles.

I feel actual physical pain when I read your for you’re. One means belonging to you. The other is short for you are. Hence the apostrophe – it means there’s something missed out. But far too many people write your going to like this. No, I’m not, I’m really not. I’m actually going to hate it. Because of your incorrect use of grammar.

I know not everyone is super intelligent or highly educated, but this is basic primary school stuff and if I read it too often, I’m not coming back.

Only a true grammar geek can understand the pain of reading these crimes against the English language. They grate. They don’t make sense. To someone who really cares about perfect English, they jump out and hit you in the face. I can’t just pretend that your says you’re because it sounds the same. Because it’s different! It doesn’t mean the same.

Does that hurt you? Does it shout at you and make your brain hurt? It does mine.

I hate to see School and Social Worker (you can tell where I work, can’t you?). These are not proper nouns. Proper nouns are names of things like Kevin or London or Church Road. They’re not words that you think are important because you’re a teacher or a social worker.

Regular readers will know that I’m a school governor and also that I sometimes make a fool of myself in governors’ meetings. One of the ways I do this is through my extreme grammar geekery. Give me a policy to pass a critical, strategic eye over and I can’t do it. I can’t see things strategically. I can only see typos.

And things I don’t agree with. Grammatical grey areas. Like The Over-Use of Capital Letters.

I explain that School and Teacher shouldn’t have capital letters, but others don’t agree. English doesn’t talk to them in the same way it does to me. I tell them the Capital Letters Are Shouting in my Head. That the Words Sound Different. I Even Read Out Loud to Demonstrate the Difference.

They look at me as though I am mental. I am all alone in my little grammar geek world. 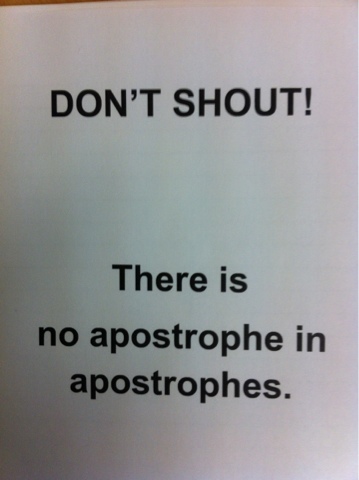