The Letter is the law

Home » The Letter is the law 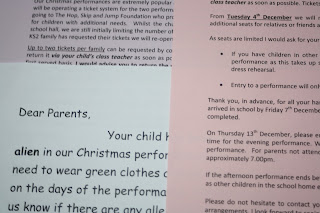 My son played violin in his first school concert the other day. It was a properly prestigious occasion in the large and ornate Town Hall with expensive tickets. He was playing in the junior string group. A tiny little fish in a very big sea.

We DIDN’T have a letter about the time he needed to be back at the Town Hall in the evening. I needed to know particularly because it was a work day and I was probably going to have to leave a bit early to get him there. So I asked him to text me to let me know.

The first text came at 11.30am to inform me he was going to be home at normal time. I knew this. It had been in a letter. So I asked if he could let me know what time he needed to be back in the evening.

Surely the 6.15 was right because he’d clearly just asked the teacher then texted me?!

At 6.15, as I was leaving the house, my husband (who works opposite the venue) rang to inform me people were going in.

Inside the venue there were no kids in school uniform. Clearly he was late. He pushed his way into a room crowded with strangers and very big people and was gone.

If only we’d had a letter. Or a boy who could listen, remember and pass on basic information. Personally, I’d trust a letter more.