My kids have written to Father Christmas and I just had to share their letters here. For their cuteness, for how funny they are and for how well they seem to reflect their personalities…

I’ll work from top-down. My eldest is 11 and at secondary school, so I think it’s fairly safe to say he doesn’t ‘believe’, although I admit that, perhaps foolishly, we haven’t had ‘the discussion’. I didn’t make him write a letter, it was his choice, despite the fact that he chose not to write one last year. I think the rather abrupt tone of the letter confirms that he is just going through the motions.

(All spelling and grammar mistakes throughout are my kids’.) 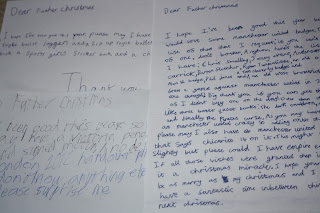 I’ve been good this year so please may I have a Victoria Pendleton hand signed photo, a Rio de Janere 2016 London 2012 handover pin badge. I don’t know anything else so please surprise me.

See, I told you here he was obsessed with the Olympics and collecting stuff.

I had been wondering whether my younger son still believed. But he wrote the most delightful letter I have ever read, which seems to confirm that he does. Why else would he put so much care and attention into it?

I hope I’ve been good this year because I would love some Manchester United badges. This a little list of them that I request; if you can’t get hold of one, don’t bother. Anyhow, here’s the list. Please could I have: Chris Smalling, Jonny Evans, Anderson, Michael Carrick, Darren Fletcher, Ryan Tunnicliffe, an old Cristiano Ronaldo Man U badge, Phil Jones and a Tom Cleverly badge and an old West Bromwich Albion match badge from a game again Manchester United in 2010 (that is the home one though). Big thank you if you get that last request as I didn’t buy that one on the day! Other than that I would also like three Beast Quest books: The dark cauldron, The dagger of doom and finally the Pirates curse. As you may have geussed I am Manchester United crazy so adding onto the Man U list please may I also have a Manchester United home kit that says Chicarito 14 on it. This might be pushing it slightly but please could I have empire earth the PC game. If all those wishes were granted then it would make it a Christmas miracle. I hope your Christmas will be as merry as my Christmas and I also hope you have a fantastic time inbetween this Christmas and next Christmas.

And finally to my little girl, who also wrote a delightful letter in her best handwriting. She has very little idea of the value of money, so her requests are a little on the expensive side. I know she’s only 6, but the boys had a very good idea of the value of money by her age, I think this is more of a boy thing. You can be fairly certain that they’ve carefully added up the value of their requests to bring them in dead on budget. Luckily, I’d already anticipated some of my daughter’s and put in an order with Grandma.

Let’s just hope they’ve all been as good as they think they have and Father Christmas can deliver the goods!