I do a single one-hour dance lesson a week and I love it. My dance teacher said her aim for this year was to get me to do another class – and I know she said it not because she wants the cash, but because she knows how much I enjoy dancing. But I can’t fit it around the kids and my husband’s work. So I stick with the one class and do my best with it.

We got through that one and it was straight onto ballet – rehearsing for my daughter’s Primary exam. She is so good, but we just had to keep practicing. Just to be sure. I started waking up with that jingly plinky-plonky music going round in my head.

Oh, and I had another dance to practice too. For the switching on of the Christmas lights.

All our hard work was geared up for Saturday. Dance day. Primary exam first thing in the morning with mummy’s Christmas lights dance in the afternoon.

My daughter and I are very new to ballet. It turns out that a ballet exam is a REALLY SERIOUS BUSINESS. We had a letter about the importance of getting the hair perfect. My buns are not the best, so I got my mum round to help. There was a lot of hair spray and extra grips involved.

We arrived 15 minutes early – and we were the last ones there. We had to put a special purple band around the bun and borrow some silky ballet shoes because my daughter’s leather size 13s (which were actually mine from when I was a kid!) are a bit big and baggy. She couldn’t get her feet in the 12s, the 13s crushed her feet, but the 1s were a perfect fit. Go figure. She also had to have a number pinned to her front and back. All ready. Or so we thought.

Six minutes until exam time – her friend’s mum gasped. ‘She’s not supposed to wear any pants!’ No pants?! She’s 6, for flip’s sake! Yes, the pink and white stripes of the Peppa Pig knickers were showing slightly and this is not good enough. Surprisingly, she took the whole emergency pants removal thing quite well and off she went to the exam.

The mums sat outside and listened to the music, sometimes whispering ‘arms and head’ or ‘marches’ to confirm we all knew what they were dancing to. The piano sounded a bit different to the CD. Oh well.

The girls came out smiling, the teacher said they’d done well, the hairband and number and borrowed shoes were returned.

On the way home, my daughter told me she’d been counting the days until her ballet exam. She was worried she’d failed, but thought it was OK because the teacher had said it had gone well. Who knew kids so young could get so nervous? But you’re going to be nervous if you have to have your hair sprayed and remove your pants, aren’t you? 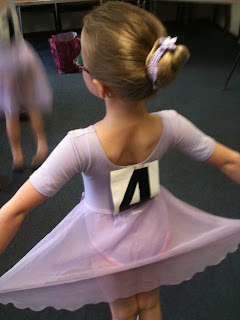 Then in the afternoon it was off to mummy’s Christmas lights performance – worrying about slipping on a wet stage hastily dried with paper towels while the spectators got drenched in the torrential rain. But the dancing went well and I don’t think I made any mistakes.

So is our dance practice over now? Er, no. We’ve both got another ‘community dance event’ in less than three weeks and we haven’t even started working on that one.