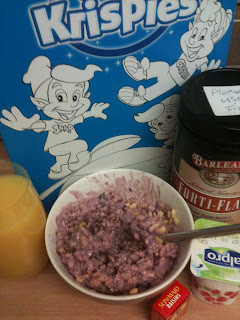 Whenever people see my breakfast, they say ‘ugh!’. But I don’t care, because this is MY breakfast and it’s healthy. Not just healthy in general, but healthy for ME. Because I suffer from IBS and this breakfast is a big help to me.

I’ve been aware of IBS since I had my children (eldest is 11), but, looking back, I can see that I had the beginnings of it two or three years before that. I suffered with it for three or four years, before deciding enough was enough! I couldn’t live the rest of my life like this, because it was getting me down.

IBS usually comes on in your 20s and there are more female sufferers than male. Many people will suffer it for short periods of their lives, some will suffer from it for a lot longer. Sadly, I fall into the latter category. There is no definite known cause, but diet and stress both play a big part.

These are the symptoms I’ve suffered with over the years (apologies if this is all a bit too much information):

Around the time I had my daughter, 6 1/2 years ago, I started to make changes. I gave up eating toast for breakfast and started eating All Bran with Actimel – All Bran is fibre and fibre is GOOD. Actimel would put the bugs back into my poor knackered tummy.

Then I started reading up – actually bran is BAD for people with IBS. Our poor delicate constitutions can’t cope with such hardcore fibre, we need a more gentle form of fibre. Like muesli. So I switched to muesli with the Actimel. But still I suffered.

So I went to a kinesiologist – an altertnative practitioner who deals with, among other things, food intolerances. I called her ‘the witch doctor’ (not to her face, obviously). My daughter was still a baby and I was still breastfeeding.

She told me I was intolerant to a large number of foods. The main ones were wheat, dairy and, strangely, sunflower – seeds and oil. Initially I gave up most things, but now I just keep wheat and dairy to a minimum and I NEVER touch sunflower – so no crisps or chips for me.

My muesli contained wheat, so I switched to a wheat-free brand. It was delicious. But still I suffered. On closer inspection, it was chock-full of sunflower seeds. Was the whole world against me?! I picked those damn seeds out of my breakfast every evening before bed – it took about 20 minutes. I realised this wasn’t sustainable in the long term. There was nothing for it, but to make my own.

I read an article advising IBS sufferers eat a particular type of ground flax seed available online. So I ordered some. It tastes pretty horrible, but it’s OK mixed in with other stuff. Other flax seeds are available in supermarkets for about a third of the price, but, having found something which helps, I was reluctant to change, so I’ve stuck with this one.

I mix the seeds with Rice Krispies. Rice Krispies are JUST rice – no wheat, no sugar and no oil. Then I add a kid’s little box of raisins, for flavour and added fruit. I would never eat raisins on their own, but mixed in, they’re OK. I top the lot off with an Alpro soya yoghurt – raspberry, blackberry or tropical, because, being intolerant to dairy, I had to quit the Actimel too.

And there it is – my ‘disgusting’ breakfast. I still suffer from IBS every day of my life, but nowhere near as badly as I used to. My disgusting breakfast is a big help.

This post was written in response to The Gallery over at Sticky Fingers. Head over to see how other people have interpreted breakfast.