I couldn’t live without…

Home » I couldn’t live without…

The other day the kids were playing a funny game – asking each other increasingly hilarious questions. (Stop reading now if you’re eating…) Stuff like:

Then the subject matter turned to losing stuff and my daughter’s face was stricken with terror: ‘Don’t talk about Teddy’. Because Teddy is special

And then it was my turn. They know me so well. They hit me right where it hurts: ‘Would you rather lose your phone or your camera?’ That’s almost as bad as asking me if I’d like to use my eldest or my younger son.

Anyone who knows me will know I am almost surgically attached to my iPhone. It’s so useful. I tweet on it, blog on it, use it for Facebook (OK, not that often – it’s a bit slow), I text with it, it wakes me up in the morning, I listen to music on it. SOMETIMES I even make phone calls with it (not in my own house though, I have no reception). Whenever we are out my kids point out to me all the pubs and coffee shops with WiFi. Just in case I ‘need’ it.

I take photos of people, my children’s laughing faces. Everywhere we go, every little achievement, even every new outfit is lovingly recorded by Mummy’s camera. I’ve tried taking photos of landscapes, but they turn out a bit crap. My heart just isn’t in it. Because to me the landscapes would look so much better with my daughter in a new dress standing there smiling. Then I would want to zoom in on my daughter and next thing I know the landscape would be lost. I’ve dabbled in nature close-ups and I’m a bit better at that, but really, people is where it’s at. 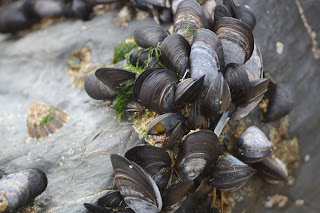 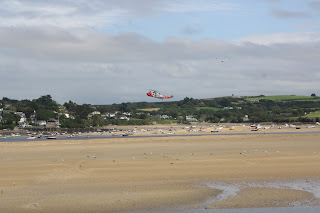 My camera is good, but it’s not amazing. It’s a Canon digital SLR. It has a standard zoom lens, so I can’t do anything too spectacular. I only converted to digital three years ago (seriously), because I refused to go from an SLR to a point and shoot thing for the sake of going digital. I would only switch when I could afford a decent camera. 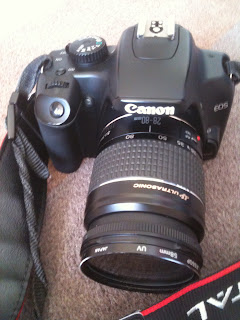 There’s my lovely camera. I took this photo on my phone, obvs.

There’s another factor to take into account – the replacement issue. If I lost or broke my phone, I would need a new one. No questions asked. I would have a new one almost instantly, probably even an iPhone (a 4, not a 5 – I’m currently on a 3). But a camera isn’t a necessity. If I lost it I would have to wait until my birthday or Christmas to replace it – and there’d be no Superdry clothes for me if that happened. My kids would lend me their cameras, but it just WOULDN’T BE THE SAME.

My conclusion – if all my photos were downloaded onto the computer, I’d let the camera go, but if there were 200 holiday photos on there, I would chuck my phone in the sea and hang onto the camera.

My husband says this is the wrong answer – BECAUSE THE iPHONE TAKES PHOTOS TOO. Yes, it’s a decent back-up and I have taken some good pics with it in the past, but being quite old it doesn’t zoom and it doesn’t have a flash – fine for close-ups in bright sunshine, but not for a lot else.

Thanks to Suzanne over at 3childrenandit for challenging me to think about what I couldn’t live without. And particular thanks to her for describing me as ‘funny, articulate and brilliant all rolled into one’. That’s a lot of pressure and I hope I’ve delivered!

Now I need to challenge some more funny and brilliant bloggers to think about what’s indispensible to them.

Rules:
1) Mention Suzanne and me somewhere in your blog post (and link to our blogs)
2) Tag three other fabulous bloggers
3) Pin Suzanne’s lovely badge at the bottom of the post