Inspire a generation was the strapline of London 2012. And I think it’s worked. Everyone was excited while it was on, everyone was sad now it’s over. And kids are running, jumping, swimming and cycling with that extra bit of enthusiasm. They’ve discovered new sports – handball, volleyball, horsey stuff, archery and shooting.

Our kids are the ‘generation’ of the strapline and in 2020 or 2024, they could be bringing home the medals for Team GB. We need to strike while the iron is hot and get them sampling new sports or trying harder in old ones. They can’t all be Mo Farrah or Jessica Ennis, but they can all get fitter, healthier and stronger, more disciplined and more motivated. Olympic athletes aren’t born. They are the result of hard work and a desire to do well. And that’s something we can all learn from.

My own kids are no exception. On the first two working days of London 2012, I got home to find my daughter, who has a wardrobe full of pretty clothes that she loves wearing, dressed in a plain white Tshirt and plain white shorts. With a scarf tied round her waist. She was fighting with her brothers. But they hadn’t fallen out. It was all in the name of judo.

Then she saw Jessica Ennis. She wants to be Jessica Ennis. And I think maybe she could. She is fairly tall, fairly slim, with incredibly muscular legs. I don’t know where they came from. She runs like the wind. She is only 6, but she beats me in a sprinting race and keeps up with her 8 year old brother, who is big, muscular and fast. Daddy is stunned by her speed.

She set up hurdles in the hall – a chair and a bag – and charged up and down leaping them. Incredibly, without getting hurt.

My younger son, who is built like a swimmer, decided his Olympic event would be breastroke. Probably 100m. One slight problem. He hates swimming lessons and I’ve promised both boys they can give up at the end of this term in September. He can swim pretty well, but he isn’t vying for a place in Team GB 2020 just yet.

I’m a long distance runner, but it’s not easy finding time to train in the school holidays when you are either at work or have sole responsibility for three kids. Another mum in the village, who also runs, realised there was a problem, so set up a free boot camp in the park for mums while their kids played.

My daughter did every single one of those exercises with me – sprinting, squat thrusts, press ups and a lot more – in 26 degree heat. At the end, we did a lap of the park. My younger son joined in. He loved it so much, he did two laps. The 100m breastroke has been forgotten. He’s going to be Mo Farrah. He’s going to do long distance running. The next day, he asked to go the park specfically to run round it again. And his little sister wasn’t far behind.

I hope they keep this enthusiasm going. I hope they remember the thrill of seeing Mo Farrah and Jessica Ennis running and getting their medals. I want them to keep running, keep jumping, keep swimming and keep cycling.

Even if they don’t make it to Team GB 2024, they will be fitter and healthier for it.

London 2012, you truly have inspired a generation. 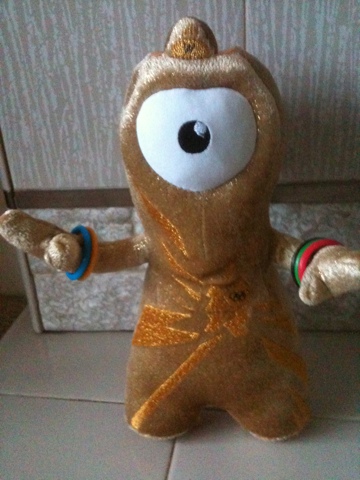