My name is MumofThree and I am a bad mum. Why am I a bad mum? Because I don’t even have time to get my own son a new pair of school shoes.

It was last Monday, yes, over a week ago, when my younger son came out of school and showed me his ruined shoes. The leather is coming unstitched and there are holes in the soles. This is the pair of shoes he’s had since September and he plays football in them at break time, so it’s hardly surprising. What is surprising is that I haven’t needed to replace them before now. The kids have generally outgrown their September shoes by Easter and I’ve certainly replaced the others’ shoes, but not these.

Not Monday. That’s ballet, followed by Cubs and Scouts.

Not Tuesday. I’m at work.

Not Wednesday. I’m at work again.

Not Saturday. Still on Cub camp.

Not Sunday. That’s a football award day which goes on right until the shops are closed.

So then we’re back at Monday. And are things any different on Monday? Or Tuesday? Or Wednesday? No. In fact they’re slightly worse.

Because this Monday I’ve got my eldest’s friend here and I’ve got a school governor’s meeting.

And on Wednesday we’re all going out on a once-in-a-lifetime trip to see the Olympic torch.

What about the weekend? Surely that’s not as busy this time?

Well, on Saturday he’s setting off at 7.30am on a trip to Twickenham with his big brother’s rugby team.

But we’ll be able to go to the shops on Sunday! Only two weeks since his shoes fell apart.

Oh no, we won’t. The under 9s football team is in a tournament. My son is in the under 8s. The under 9s are short of players. So my boy can play! Great! That’s going to take all day. And he’ll be really tired. And he won’t have done any homework.

AND HE STILL WON’T HAVE ANY NEW SHOES.

Why don’t you just go to Next/ M&S and pick him up a pair, I hear you shout. Because my son has the world’s widest feet. There is probably one pair of shoes in the whole world that will fit him. He’s an H. Except he’s really an I. But they don’t do Is. So he has to go up a half size or a whole size to compensate. This is why he spends his entire life, summer and winter, in Crocs.

My kids don’t have to go to school looking pristine. Their jumpers are a bit faded and the cuffs are a bit frayed. This is normal.

But my kids are NOT the kids who go to school in stained shirts or falling-apart shoes. Well, they weren’t.

I am officially a bad mum. 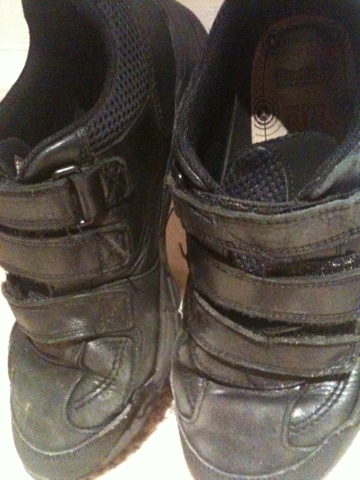