My daughter loved her new ballet class last week and her teacher said she did really well and listened well. But all my daughter can talk about is ‘the costume’. Not the uniform, the outfit, the kit, the gear, it’s the COSTUME.

So in answer to her question, I’m not sure… Of course I want her to look and feel the part, to belong, to not look like the new girl for a whole term. But this has to be balanced against potentially forking out 50 quid for something that is going to last for a few weeks.

I’ve tried to explain this to her, but of course she doesn’t understand. She just wants the ‘costume’. She wants to look like the ballerina she’s always dreamed of being. And who could blame a 6 year old girl for that? So I need to do more research – into second hand gear and checking whether they do really change ‘costume’ in Year 2.

It’s not the first time she’s required the full ‘costume’ and it won’t be the last. She has the Tshirt, hoodie AND tracksuit bottoms for her other dance class. Everyone else in her class just has the Tshirt and a higgledy-piggledy mix of trousers, skirts and shorts. And she’s only gone and grown out of her trousers, so I’ve had to order her another pair. I drew the line at the new design Tshirt though, explaining that Mummy couldn’t really afford the new Tshirt as well as the ballet ‘costume’.

And then there’s Rainbows. All they are required to have is the Rainbows Tshirt. The hoodie and tracksuit bottoms are optional. But guess what my daughter has got?! To be fair, she looks beautiful in them. Of all my daughter’s clothes, my husband likes to see her in her Rainbows uniform best of all.

When we were poor, the answer to ‘can I have?’ was always ‘no’. We didn’t have the option to say yes, but now we do. I wouldn’t buy her a toy or a comic in the supermarket if she asked, so should a ballet ‘costume’ be any different? And the answer is… I don’t know. What I do know is my boys can survive a term at Cubs and Scouts without the right uniform and they never have any optional extras.

But until I decide, I’m going to be hearing the words ‘When can I get the costume?’ a lot more. 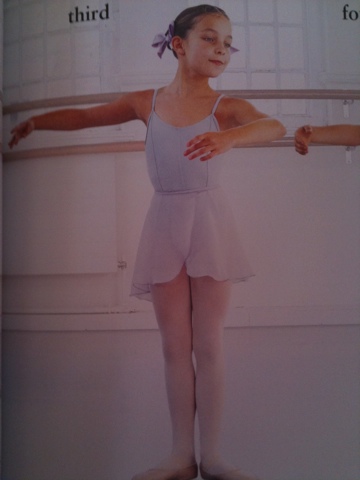