Last night I did something I’d never done before. I WENT OUT IN FANCY DRESS. Yeah, I know, big deal. Lots of people do it all the time. But not me. I’ve led a very sheltered life.

I was out with the ladies (and one very brave man) from my dance class. And we were dressed as geeks. I ummed and aahed for weeks over whether I should go. It’s the same old issues. I’m older than them. I don’t drink. I will feel stupid and left out etc etc.

But I couldn’t stop thinking about my costume. And I love dancing. To go out with people who also love dancing would be amazing. If only I could stick it out that long and make it to a club. In the end I decided I would go for it. Because I would regret it if I didn’t go. And if wasn’t enjoying myself, I would just go home.

I had various ideas for a costume – a blazer with pens in the pocket or a geeky smart shirt – pens in the pocket again. Maybe a Star Wars Tshirt… But Sainsbury’s children’s department and their 25% off offer came up trumps for me. There are advantages to being skinny and flat-chested. Like being able to wear 12 year old boys’ clothes. Clothes that you can then pass on to your own sons, therefore not wasting any money. Because I don’t believe in wasting money on me and nights out. Money is for the family, for everyone to enjoy.

So kitted out with a yellow SuperMario Tshirt (to pass on to younger son), a red tank top (to pass on to either son), an Olympic rucksack (to pass on to either son) and Olympic hair clips (to pass on to daughter), I was all geeked up. I tried to iron creases into my jeans and failed, so I just gave them some rather attractive turn-ups and teamed them with my own sandals and my son’s socks. I was wearing my own spare glasses (which I have seen many a 50-something shop assistant wearing), but my daughter suggested 3D glasses with the lenses popped out would be better. She was totally right.

The night started at the rugby club where our dance class is based. The few men drinking in there when we arrived couldn’t believe their eyes. They didn’t stay long. Everyone looked brilliant and suitably geeky. There were plenty of bum bags, tank tops and bow ties on display and at least half of them were in 3D glasses with the lenses popped out.

We played possibly the most hilarious game EVER – in which two teams compete to drop coins in an empty glass. By carrying them between their bum cheeks. Somehow the coins just wouldn’t stay up there. Were 2ps better than 1ps? Were more coins better than less? I don’t know, because I didn’t get a single coin in that damn glass. But I certainly had a laugh trying. Incidentally, you picked the coins up and inserted them with your hands. One class member missed that bit and squatted over them very elegantly to try and pick them up with her arse. Good work.

Yesterday I learned four more drinking games. Being a vegetable and not showing your teeth, being a smart fellow who likes to look smart, passing on ‘the witch’ (or Barbra Streisand, if you prefer) and shouting ‘naki 1’ ‘naki 2’ etc without shouting at the same time as someone else or being number 17. It really wasn’t scary at all.
Then we went into town. I considered going home. Town is a scary place full of pissed people. I would just go for a bit. We went to a pub, then there was talk of a club. I considered going home. Clubs are scary places full of very young, very pissed people. I would just go go for a bit…

Oh my goodness, I’d forgotten how much I LOVE clubbing. I think I’ve been clubbing once since my daughter was born (and as I recall it was a fairly miserable experience). We went to a club I first went to at 17 (when the youngest member of our dance group was a newborn!) and last went to in 2000 in the very brief window between getting married and getting pregnant.

I didn’t even notice the pissed people. All I noticed was the music and the dancing and how much fun the whole thing was. It was great to be dancing in a big group, all in our ridiculous outfits and all just having a laugh. I didn’t care that I was old or sober. I danced for an hour solidly without wasting time getting a drink. I think I surprised a few people, because I’m always the one in the class struggling to keep up and remember the moves.

Yep, I can dance. I just can’t learn routines.

At midnight, sensible Mummy kicked in. Yes, I was having fun, but I knew I had to be up in the morning, so I went home.

But I’ll be back. I won’t ever worry about going out again. And next time I’m going to stay out later! Bring it on. 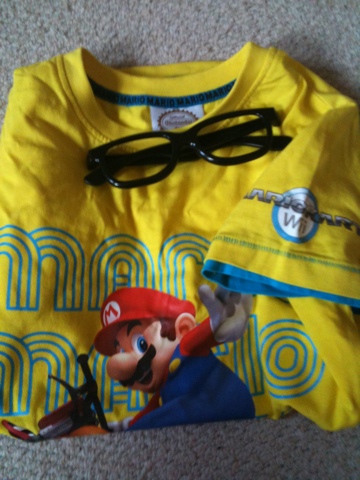