It’s not long since I shared with you the story of how my then-5 year old younger son stopped eating because he was worried about his weight. Now the issue has raised its ugly, skinny little head again.

It started on Friday when my son came home buzzing about a food diary he had to fill in for homework. He had to write down everything he ate and drank for a week and he was very excited about it.

‘And I’m starting it tomorrow!’ he shouted, while jumping up and down.

To put this into context, this isn’t compulsory homework. It is one of a number of options. Between now and the Easter holiday he has to complete five out of a possible 15 homework exercises on the subjects of healthy lifestyles and Easter. These include art and craft activities, simple sums, internet research and getting out in the fresh air with your family. Something for everyone.

But my son is only interested in that damn food diary.

My son is without a doubt the heaviest child in his class. He is equal tallest and he is the biggest built. (I am pleased to say there are no fat kids in his class.) A lot of them are tiny, skinny little dots who are smaller than his 5 year old sister.

My son is, and always has been, very muscular. He is actually very thin and his ribs show clearly, although you would never guess this to look at him. He has a good appetite, but not a huge appetite. He eats a healthy balanced diet. He isn’t greedy and he doesn’t eat crap. The only thing he ever eats between meals is fruit. There are times when I look at him and his sister and I wonder if they are too thin.

And then he started the food diary.

Every day my son has a huge breakfast. For at least the last year, probably the last two, he has started the day with a big bowl of Cheerios and three, yes THREE, Rice Krispie bars. He has skimmed milk on his cereals and drinks a cup of it too.

On Saturday he played football for two hours in the morning, as he always does. In the afternoon he went for a two mile walk/ run in the hills.

And in addition to the massive breakfast, the apple juice, raisins and spaghetti bolognaise, he had a bottle of Lucozade, a bottle of Tango and a chocolate cake. BETWEEN MEALS. My kids aren’t saints, and nor am I. They eat biscuits and chocolate every day. But only after their meals. When they’ve finished them.

The diary was looking dreadful. It was making me laugh. I felt compelled to write ‘played football and went for a walk in the hills’ to justify it. I shouldn’t have needed to. It’s a homework exercise and no-one is judging him. His teacher only has to look at him to see he is fit and healthy.

On Sunday he played rugby for two hours. He had another bottle of Lucozade and some lemonade. What is going on here?! My son only has lemonade on birthdays and Christmas! I wrote ‘played rugby’ on Sunday’s entry to make it all OK.

Later in the day, at ‘fruit time’ (they always eat fruit mid to late afternoon), he asked for an apple, a banana, some olives and a box of raisins. I said he wasn’t allowed it. He could only have two of them. I explained he could get a bad tummy if he ate all that fruit in one go. So he grudgingly just ate an apple and some raisins.

After tea he asked if he could have three rows of chocolate (that’s 30g). Stupid, stupid mummy. I told him it was 30g. So he asked for ONE row. That’s just 10g.

I tried telling him it was OK to have more. He is a young, fit, active, GROWING boy and he needs all the food he is eating. But he won’t accept that.

This morning he insisted on having only two Rice Krispie bars with his breakfast and he asked if he could take a box of raisins to school to eat at break time.

Then he said ‘Look! I’m nice and thin!’ And then my daughter said ‘I’m thin too!’

It’s only day 3. But it’s time to abandon the food diary before they do themselves some serious psychological damage. 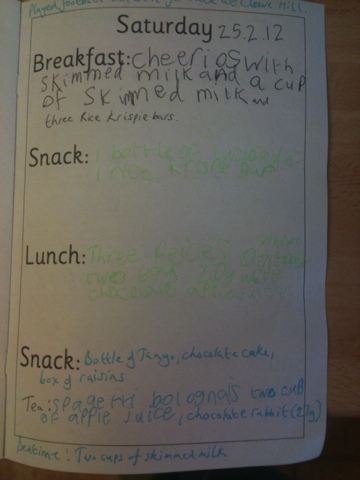