A while ago, I confessed to being a chocaholic. I wasn’t entirely honest with you. I failed to mention that I have a special form of chocaholic OCD. I was worried you would think I was too weird. But you’ve probably got that message loud and clear now anyway, so I am ready to come clean.

When I started on the Green & Blacks back in 2007 as a way of improving my stomach problems, I looked at that beautiful bar and I wondered how much I should eat. For those of you not familiar with Green & Blacks (and if you aren’t, I would strongly recommend it) – it is made up of 10 rows of three squares. The whole bar weighs 100g, so of course each of those rows weighs 10g.

Something inside me told me that a third of a bar would be an appropriate amount to eat. And once I’d made that decision, something inside me told me I had to stick with it. What did I tell you? OCD. With ten rows of delicious dark chocolate, a third isn’t that easy. You have to have three full rows and one extra square. That extra square has to be broken VERY carefully. You don’t want to take too much and be disappointed next time.

After doing this for a couple of years, one day I didn’t take three rows and a square. I just took three rows. So all of a sudden there was FOUR ROWS left at the end. Luxury. That became my new routine. I used to look forward to ‘four days’ as I christened them. But then I couldn’t wait. I started taking the four rows at the start of the bar, then being disappointed on my second and third visit to the bar when I discovered the four rows had already gone.

At this point, I must mention my husband. Historically, my husband was a much worse chocaholic than me. When I first met him, five Mars bars a day would be perfectly normal. He was young and skinny, walked everywhere, didn’t eat proper meals and was absolutely incapable of walking past a newsagent or garage.

As he got older and started working, of course he put on a bit of weight. He cut down from five-a-day, but could never give up.

Until New Year’s Day 2010. His resolution was to give up chocolate for the year. And he did. He was evangelical. Verging on the irritating. He once spat out a cake when he realised it had chocolate chips in it. He was preaching to me – it’s bad for me, it’s addictive, his life is so much better without it etc etc. And do you know what? I didn’t even care. Because I have no other vices and I REALLY LOVE chocolate.

As the clock struck midnight on New Year’s Day 2011, he shoved chocolate in his mouth. He ate a ridiculous amount of chocolate that day – Dairy Milk, Double Decker, Flake, Aero… You name it, he ate it. He should have been sick. He should have had a headache or a stomach ache. But he didn’t. And on 2nd January he gave up again.

But this time apparently he didn’t promise to give up for a year. He started allowing himself the odd chocolate cake. ‘Not really chocolate’ apparently. Then in September he started nicking the kids’ chocolates.

And then the worse thing. HE STARTED NICKING MY CHOCOLATE.

This greatly amuses my husband. He likes the chocolate, but even more than that, he likes to see my face when he casually gets a bar out of the cupboard and casually breaks a piece off. Sometimes he doesn’t even break it along the rows. AAAAGH!

Luckily, he has given it up again this year. So I can get back to my old OCD ways with no-one to disturb me and upset me. 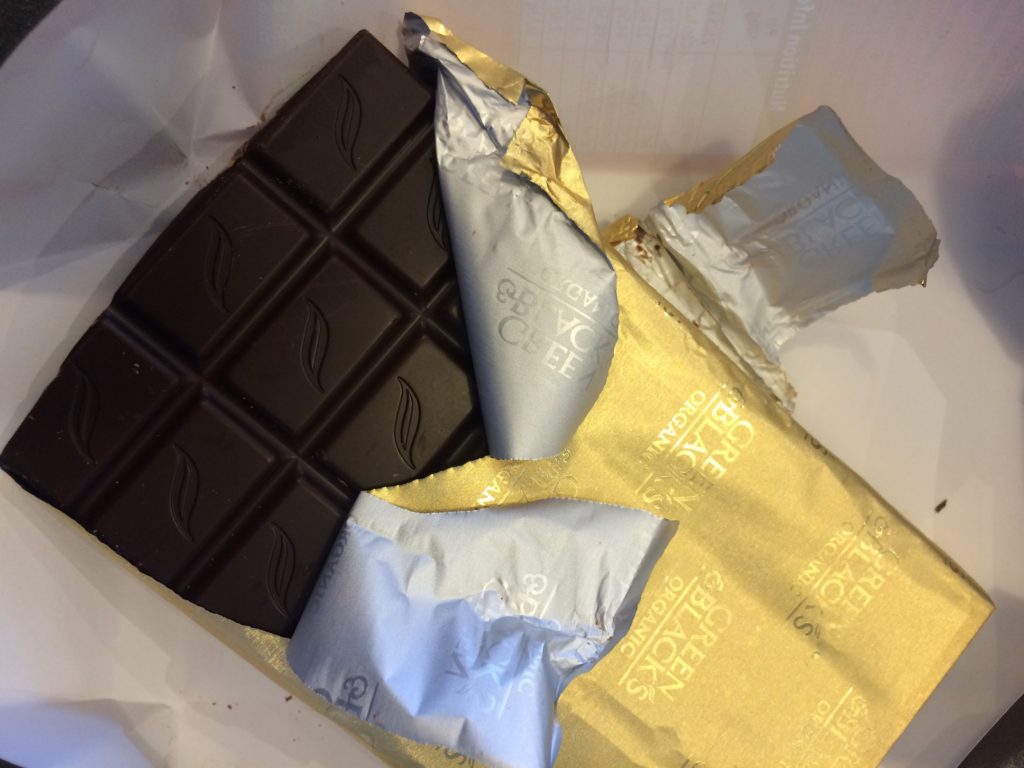