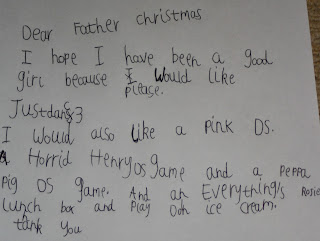 Do your kids BELIEVE? One of mine definitely does, one almost certainly doesn’t and the middle one – I’m not sure. Believes with a little bit of questioning thrown in, maybe.

I think I was 8 or 9 when I stopped believing. It was a gradual process. I remember at the age of 6 or 7 a friend telling me she had definitely seen THE REAL Father Christmas in town. I knew it wasn’t the real one, but she wouldn’t have it. The process of not believing went from 100% belief, to Mummy and Daddy providing some presents and the big man providing some, to Santa just bringing the orange and apple and Mummy and Daddy bringing the rest, to realisation.

My eldest hasn’t confirmed he doesn’t believe. And I’m quite happy with that, as long as the reason he hasn’t confirmed is that he does still believe. (Does that make sense?) He’s in year 6 with some worldly kids with big gobs and he’s a bright boy himself. I’m pretty sure he knows.

The fact that last year he didn’t write a letter, preferring instead to stand on the dining table and shout out his requests ‘because Father Christmas is watching all the time, so he can see me’ I’m guessing is a pretty good indication that he doesn’t believe. I’m glad he hasn’t mentioned it though, because it would spoil it for his sister.

My younger son does everything at the same time as his brother and is very bright and mature, so I think it’s likely he doesn’t believe either. But despite his maturity and intelligence, he does have a lovely innocence, so maybe he still does.

Last year he shut himself away with the Argos catalogue and wrote his letter and sealed it up. None of us had any idea what he’d asked for. Needless to say Father Christmas’s elf was forced to open the letter before it went in the post – and was surprised by what he’d asked for. The elf would never have guessed that he wanted a load of fighting hamsters and fighting hamster accessories as he’d never shown any interest in these before.

This year the letter has been changed three times. It’s gone from money for laptop plus very expensive Nerf gun and Moshi Monsters membership, to guitar and accessories and now money for laptop plus packs of very cheap Moshi figures. Helpfully, he has provided the Argos reference numbers where appropriate to assist Father Christmas.

My daughter completely believes in the magic – and is slightly afraid of it. My eldest was afraid of Father Christmas around the age of 2, but soon grew out of it. My daughter is still frightened now. Her worst fear is that she will wake up when he’s here. She very rarely shouts me in the night any more, but she worries in case she will need to shout me (for a bad dream or the toilet) and Father Christmas is here.

She understands that the Father Christmas she sees in town or when she goes on the steam train to visit him is not the real Santa. It is one of his helpers. Her brothers are quick to point out that they’re not helpers. Helpers are elves.

She is particularly taken with a letter from Father Christmas one of the boys in her class brought in to school. In it, Father Christmas says he will bring everything the boy asked for, if he is a good boy. My daughter thinks he is very lucky because he’s good and will therefore get all those presents. Her brothers are quick to dismiss it – it’s from his mummy and daddy – but my daughter is in awe. It can’t be from his mummy and daddy because it looks ‘very Santa-ey’.

In the last two days, the whole mystery of Father Christmas has been answered for us, not once, but twice. We saw Father Christmas in a shop, so we just walked in for a chat. He told my younger two and my son’s friend that it wa OK not to put your letter in the post as long as you’ve written it down because he has invisible elves who see it. He has another sort of elf helping him at his factory. He also remembered delivering a lot of presents to the kids last year. My daughter and my son’s friend were completely taken in.

And if you’ve ever wondered how Father Christmas gets round the world so quickly and gets to every house? Two words – Arthur Christmas. The explanation is both magical and 21st century. In other words, perfect.

Last year my daughter asked for little things like Peppa Pig pyjamas and a Peppa Pig torch, this year she has got rather more materialistic. But she’s not really old enough to understand how much things cost – she wouldn’t necessarily realise a DS costs more than a Peppa Pig torch. So this year she has asked for a DS (pink, of course), two DS games, Just Dance 3 for the Wii, an Everything’s Rosie lunch box and Play Doh ice cream. My eldest, who just wants a couple of coins for his collection and a Star Wars 3D chess set is disgusted with her. ‘Look at this! This is so greedy! She can’t have all of this!’

Luckily Father Christmas knows her Grandmas and Aunties and will be sub-contracting some of the requests out. If he delivers, she will believe and Christmas will retain its magic for another year or two.