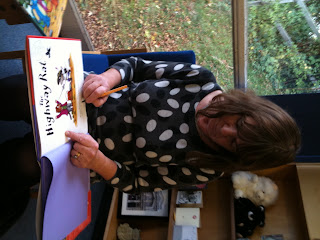 Now I’m a proper grown-up, I no longer have heroes who are musicians, actors or sportspeople. My heroes now are all literary.

It’s because I love books but, it’s also because I’ve always wanted to write. A few years ago I bumped into an old teacher in the village. I didn’t remember her name or what she taught, but she remembered me and that I’d wanted to be an author. Had I made it? Does part-time press officer count? I guess it’s in the right ball-park. It’s closer than working in a shop or being a nurse or a hairdresser.

And if I’m honest, having authors for heroes is partly because it’s the only thing which I could possibly, POSSIBLY do now. I’m never going to get the call to star opposite Brad Pitt in a Hollywood blockbuster and I’m not going to learn the guitar and become a 40-something rock god.

As a dedicated mum and massive kids’ book fan, my greatest heroes of all are children’s authors. I have now heard my three biggest heroes speak – Julia Donaldson, Andy Stanton and Jeremy Strong – and they have all inspired me. (OK, JK Rowling is my absolute biggest hero ever, but she doesn’t talk at literature festivals, or anywhere really.)

If you don’t recognise the picture, that is Julia Daonaldson. She is a God for pre-schoolers and their parents. And I’ve had a conversation with her! We even agree on The Gruffalo. It’s a great book, but actually she has lots of great books. Personally I prefer The Snail and the Whale and Tabby McTat.

Julia Donaldson hasn’t just written The Gruffalo and those other books with Axel Sheffler. She’s written 157 books! Many of them are school books and plays for children, but she has about 60 books from babies to teenagers available to buy in the shops.

And she started out by writing songs. OK, they were songs for television, but she fell into writing stories. Her first book, A Squash and a Squeeze started life as a song. She got a call ‘Hey, can we turn your song A Squash and a Squeeze into a book?’ And the rest is history. She’s not a young woman. She probably got that call when she was about my age.

That call to say ‘Hey, I read your Arsenic hour post, it was hilarious, we’d like to turn it into a children’s book. Nick Sharrat is already on board to illustrate’ could be just round the corner. Well, maybe. It’s more likely than the Brad Pitt call.

Andy Stanton, author of the Mr Gum books, which are the most randomly hilarious books imaginable, wrote the first Mr Gum story in one night to make little cousins laugh at Christmas. Then he forgot to share it with them, or they were too busy playing to listen and it went away for a couple of years until he discovered it again and thought ‘Actually, this is quite funny’ and sent it off to various publishers.

I don’t have his off-the-wall imagination, but I do perhaps share his ability to get a lot of words down very quickly. A whole children’s book in a night might be pushing it though.

Jeremy Strong started out as a teacher before branching into writing. His books are funny family situations. Kind of real life, but with added animals or historical characters or time travel to make them that bit more appealing to 7 and 8 year old boys. His work is what I aspire to most.

I’ve only heard one adult author speak – David Baddiel back in about 2004. He said most authors’ first books tend to be semi-autobiographical. Inspired, I started jotting down funny situations and experiences in a notebook. Probably not dissimilar to my blog. But with no blog and not even a computer to type on, my ideas remained in my notebook. Then I got pregnant and my ambitions and ideas got pushed to the back of my mind for another few years.

Now, inspired by my heroes, and believing anything can be funny or interesting if it’s packaged in the right way, I’m trying again through this blog.

I’m not holding my breath for that call, I’m just happy to be making a few people laugh, smile and shake their heads in disbelief.