Life with three teenagers isn’t the easiest, even with ‘good’ teenagers like mine. Sometimes the conflict between my three teenagers gets so bad that you could cut the atmosphere with a knife.

Sibling relationships change and develop over the years. Brothers and sisters grow closer and grow apart. Coop them all up in the same house for months on end with no school and no work and these things tend to get worse.

We’re at a stage now where it is pretty much impossible for the entire family to eat a meal together without an argument. Which isn’t fun for anyone. Least of all the parents who have put time and energy into making that meal.

My kids are bored, my eldest most of all. He entertains himself either by winding his sister up directly or by making controversial statements about politics and things happening in the news. He knows that will annoy all of us, but especially his brother. Then he can bring out the big guns about my younger son’s privileged education and how he himself went to the school of hard knocks. (At this point he will conveniently forget that he did go to a grammar school himself for A Levels. Also, my kids are all at state schools. They are selective schools, but we’re not paying for them, they are not overly privileged, just bright.)

So either my daughter gets upset or my younger son gets upset. Then my eldest will get told off and maybe he will get upset too. Or more likely, he will get cross. And another meal has been ruined.

This happens pretty much every day. Luckily, my eldest does go out to see friends quite a bit now that lockdown has eased, so sometimes we get a peaceful meal without him.

How did we get to this point?

Of course it’s been a long history of sibling ups and downs, stretching back over 16 years to when my eldest first became a big brother.

My two boys were always close as little kids. They did everything together and were the best of friends. But they have always been very different – different personalities, different skills and different interests. They started growing apart when my eldest went to secondary school. He always seems to struggle to relate to people at a different life stage to himself. But they would always walk together when we were out, right until about halfway through lockdown, when they just started to annoy each other too much.

My eldest has always had a problem with my daughter for as long as I can remember. She is the nicest girl without a bad bone in her body. It is impossible to dislike her. But he dislikes her. There was a nice period when they were both at the same school for two years, when they did get on a bit better. But now he’s an apprentice and she’s just a year 9 and they are worlds apart again.

She is defensive with him all the time and is just waiting for him to be horrible. Sometimes she reacts before he has even been horrible. I can’t blame her for that, but it all adds to the conflict.

Throughout lockdown, my younger two have been the best of friends. Without being able to see their school friends, they have filled that gap for each other. They go for walks together every day. My daughter chatters, my son listens and they are both happy.

In the evenings, all five of us often go for walks together and we get the same conflicts we get around the table. My eldest specialises in pulling faces at my daughter or getting in her space. Sometimes he chucks bits of grass and weeds at her. (Yes, he’s 19, not 4.) She starts to get angry. Her tolerance of him has been worn down so much that it is now approximately half a second. So she will lash out at him. If he persists, his brother will then lash out at him too, because he doesn’t like to see his brother bullying his sister. 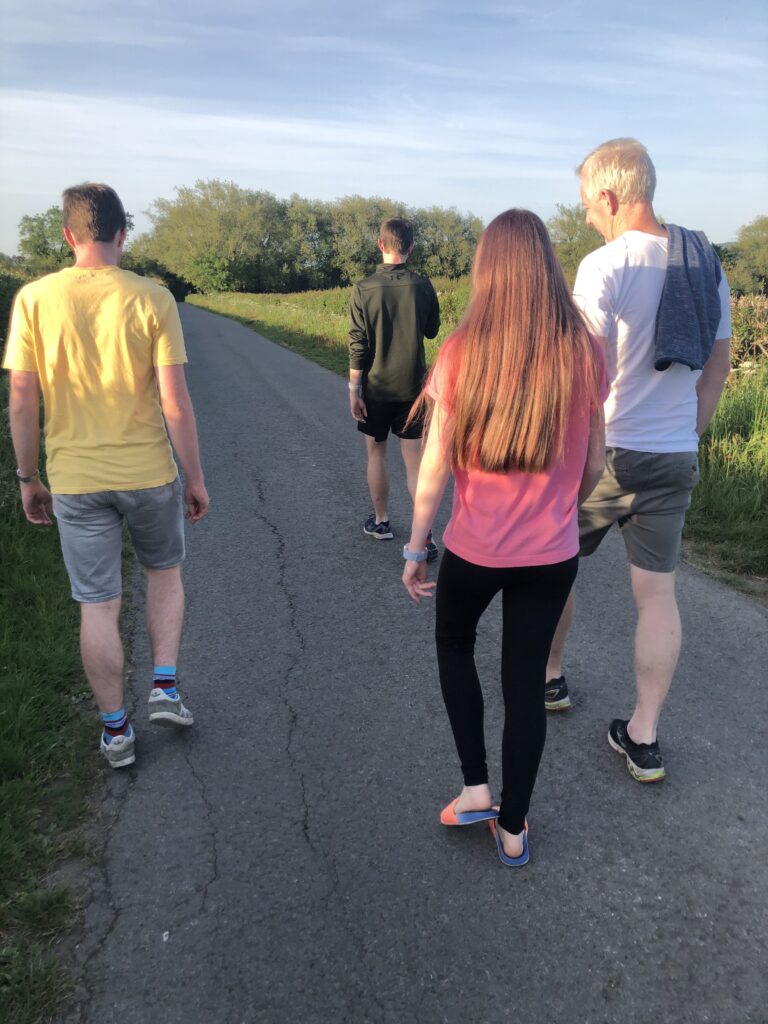 Obviously if my daughter kicks or hits her brother, she has to be told off. Even though we know why she does it. So that all adds nicely to the conflict. Ideally, we would alternate and only take either my eldest or my daughter on our walks so that we get some peace. But the whole ‘not fairness’ of that would mean we would get the conflict anyway, only before we set off for the walk rather than while were out.

The younger two ask why I don’t tell my eldest off more. And I do try, but parenting an adult isn’t always easy. I can’t be telling him off constantly. They would like us to leave him out of everything we do as a family.

But they forget one really important point for me – he is my son too. He might be a pain sometimes, but I love him just as much as I love them. I don’t want to exclude him from the family. He’s at an age now where sometimes he chooses to do things with the family and sometimes he doesn’t. But I don’t want to stop him joining in when he wants to.

So we are left with the teenage sibling conflict.