A few weeks ago, I pledged to myself and my readers that I would do a reverse advent calendar for the local food bank this year. I get fed up of the pointless commercialism and consumerism of Christmas, not to mention the environmental impact. My particular dislike at the moment is advent calendars full of expensive stuff that nobody needs.

So I decided to do a reverse advent calendar. 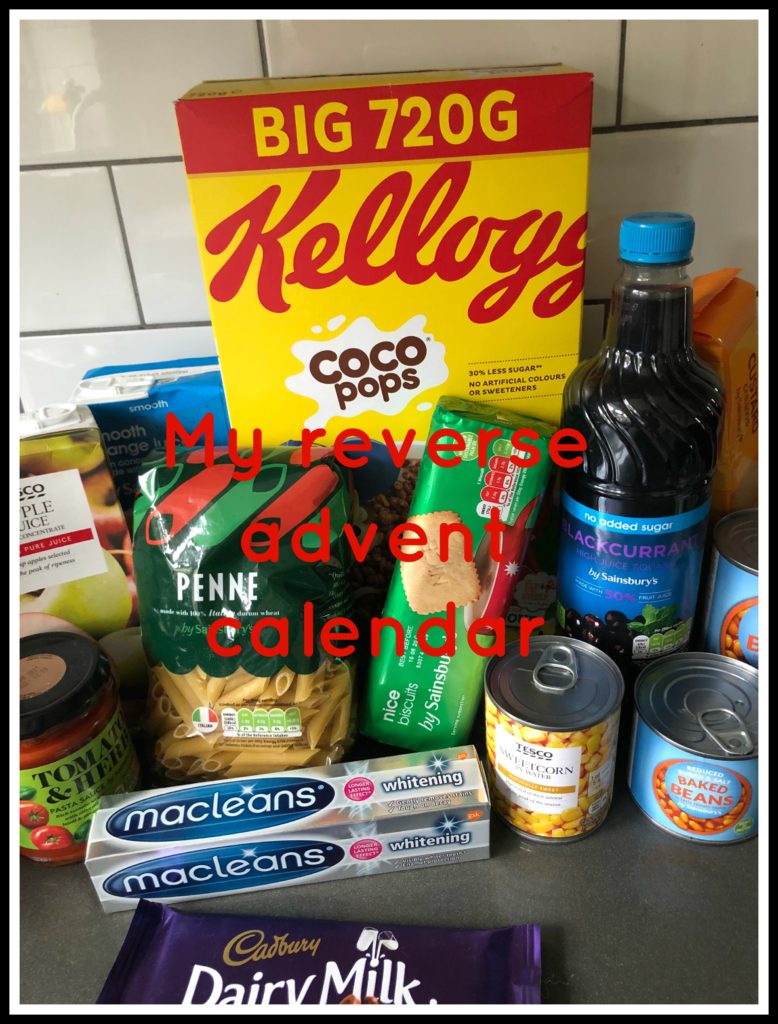 It’s actually something I’d been thinking about for a while. I give a reasonable amount to charity every year, but I tend to do it in an ad hoc way. It would be nice to have a different aim for December.

I was actually kind of inspired to start it a couple of weeks ago when I committed the terrible mum crime of BUYING THE WRONG BAKED BEANS. We usually buy Tesco beans. I’ll be honest, my kids would much rather have Heinz, but they cost about three times as much. If it was only a couple of pence more, I would say that was fine and just buy them, but I can’t justify paying three times as much. We ran out of Tesco beans at home, so I just got a couple of Sainsbury’s tins until we got our next shopping delivery. And they were literally the worst things the kids had ever tasted, apparently. I’m not so cruel that I would make them eat them if they didn’t like them, but I wasn’t going to let them go to waste. So I thought I would give them to the food bank.

(For the record, I’m sure they don’t taste that bad, my kids are just fussy. They’re supermarket brand baked beans, I was fairly confident I wouldn’t be upsetting or poisoning the recipient.)

We also had an excess of Coco Pops at home. Three of my family members used to eat them every day – two of them ate a lot a day, then suddenly they stopped eating them. And we had four or five boxes left over. So I could send those to the food bank.

On 1st December, I nearly forgot my reverse advent calendar until I was in Sainsbury’s and saw a little sign next to the rice saying something like ‘Ideal for the food bank’. So I bought it.

I then went home and collected the Coco Pops and the baked beans, as well as some soap and toothpaste from our cupboards.

It would have been nice to add an item every day, like a proper advent calendar, but the reality is that I mainly bought a few things together every week. I had some things in mind that I’d thought of, but I also used this little image from Mum in the Madhouse as a guide. I also checked our local food bank and discovered they particularly needed long life milk and men’s toiletries, so I added those. 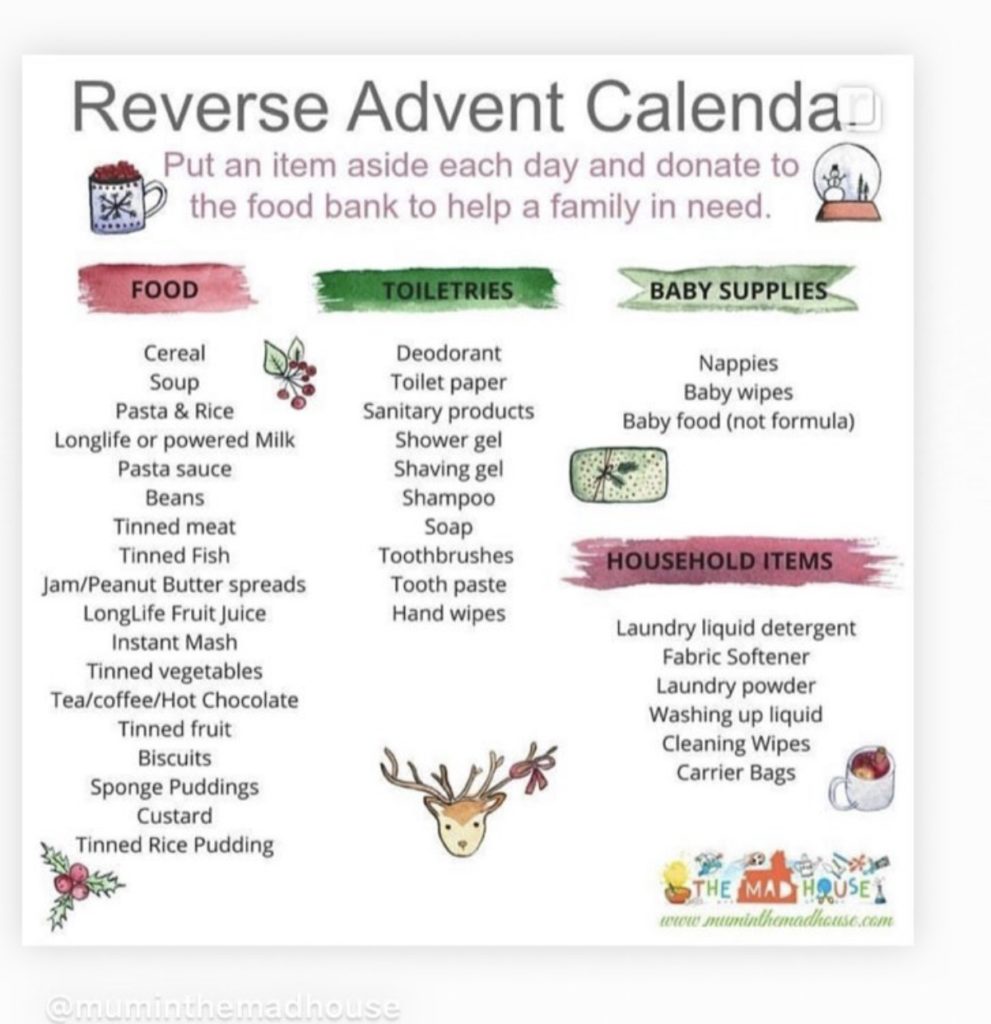 I would never have thought to buy tinned fruit, because I don’t eat it myself. But the food isn’t for me, of course. I’m lucky enough to be able to eat fresh fruit. If someone can’t afford fresh fruit, tinned fruit is a really good alternative – both for the taste of it and for their health and getting their five a day.

Most of the items I’ve included are own brand, with a few branded items and a few from the ‘basics’ range.

About halfway through December, my daughter needed to take something to school for the food bank. I had a wobble. Did I want to give up the things I had carefully collected? Then I had a word with myself. I didn’t have to personally supply 24 items to the food bank. I’ve still acquired 24 items myself and it was all still going to the same cause, whether I donated it or my daughter did.

So I gave her the rice, one of the tins of beans and a bar of soap.

Now I’m not sure if there are any rules about how you do a reverse advent calendar. I’m sure if there are, I have probably broken them. But the result is the same. I didn’t display the items in any sort of fancy container, that goes against my principles on the environment and buying excess crap we don’t need. But I have collected together a bag of food for (almost) every day of December.

So my reverse advent calendar includes:

Oh and my final failure? I didn’t actually get it to the food bank before Christmas. But I figure that everyone donates at Christmas and food banks need food all year round, so if I get it to them at the start of January, that is just as good. 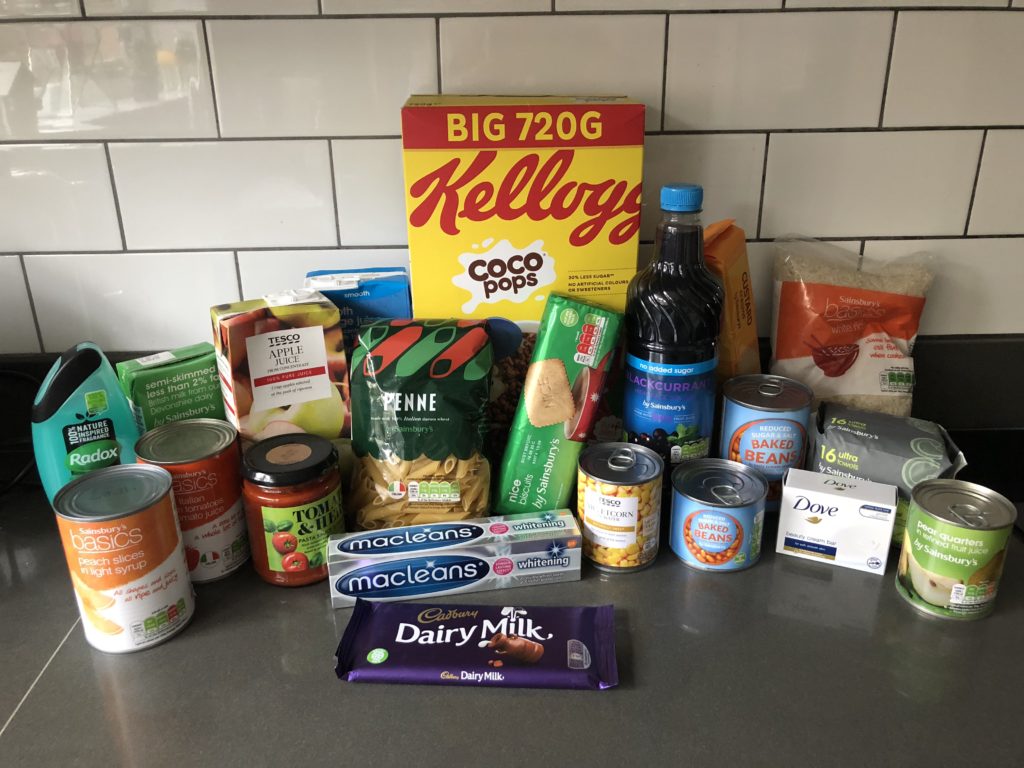