Well another school year is over, and for one of my kids school is actually over for good. I know parents always say it, but I can’t believe that time has flown by so quickly. I can’t believe I have one child who has left school, one going into GCSE year and one going into year 9, which is definitely no longer ‘new’ or ‘little’. (I think kids are generally still considered a bit new and little in year 8.)

It has been a really good year 8 for my daughter. The school is starting to see what a brilliant all-rounder and generally amazing person she is. And I think she is finding the confidence to show that she is.

Academically, she is in the top half of the class in all of her subjects. In some subjects, she is very near the top of the class. This is a big achievement, because she’s at a grammar school and while she is undeniably bright, she isn’t a borderline genius like her brother. She works hard, both in class and at home, and has completed some amazing work. Every piece of work she does, she always goes above and beyond what is asked of her. Her teachers had nothing but praise for her at parents’ evening and she is forever getting house points.

This year, her talent for dance has also been noticed. She took part in a regional dance competition with a small group of girls and they came fourth (sadly just one place from qualifying for the national final). She also performed a piece of her own choreography at the school talent show – and won it. She was then asked to perform her dance in assembly and at the school’s end of year song and dance show for parents. My daughter also won the year 8 category of the school’s art competition with her stunning painting of Copenhagen. 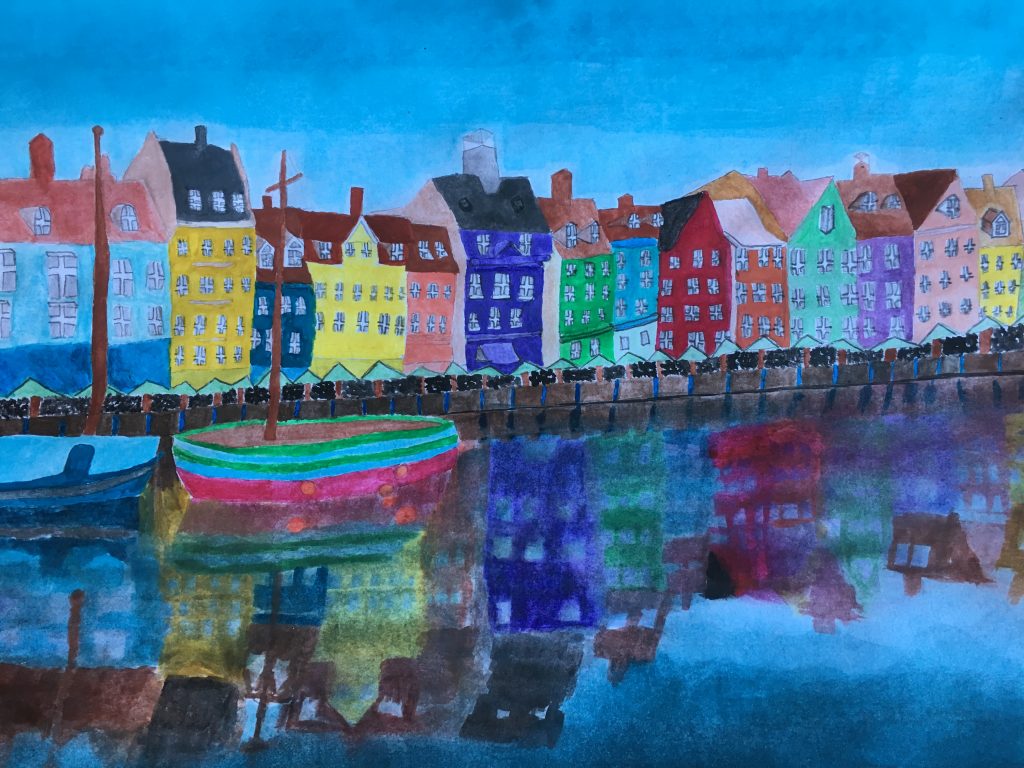 At the end of the year, my daughter was named in assembly as one of those in the top 20 for house points in her year (she thinks she actually came fifth). Each tutor was also asked to nominate one child in their form who had shone in all aspects of school life – my daughter’s tutor chose her.

My daughter would still like to achieve more in sport and hasn’t quite found her feet with that yet, although she attends all of the clubs. Socially, she has a lovely big group of friends, and also seems to get on very well with everyone else. She is looking forward to year 9.

I think year 10 started as a bit of a shock for my son, especially GCSE art. But he soon learned to manage his workload. He is enjoying all of his subjects and really thriving, particularly in the sciences. As a highly intelligent boy at a highly academic and selective school, he is expected to come out with all 8s and 9s in GCSEs. I thought he might get a 7 (still an old A) in English, as he doesn’t read and it is generally his weakest subject), but he astounded us all by getting a 9 in his year 10 mock.

I get the impression (although it wasn’t mentioned at the time), that his performance dipped a bit in year 8 and at the start of year 9, but his teachers are all very impressed with him now. His head of year even took time to find us to congratulate him on his mock results at parents’ evening.

He continues to enjoy his sport – rugby, football and athletics (specifically long jump). As a team, the rugby and football teams didn’t do so well this year. As an individual, my son has absolutely flown (pun intended) with his athletics and long jump. He won the intermediate boys’ trophy on sports day for picking up the most points. With his long jump, he qualified for the national competition and he qualified for the county competition with his triple jump – coming second. He got the players’ player award for athletics (again) and a special mention from the head of PE for his achievements in long jump. He has actually already jumped further than the school record, with three years left at school, but needs to do it at sports day for it to count.

I have every confidence in my son for year 11 and GCSEs.

My eldest has had the biggest academic roller coaster this year. He started year 13 with his geography teachers warning that he was heading for potential failure. His business teacher could see he had a lot of ability, but he wasn’t getting it down on paper. When he got C/D in his geography field trip individual study, that was a bit of a turnaround.

Then my son went and astounded us all by coming out with really good mocks results. Suddenly he had the potential for a B in geography. The individual study wasn’t going to be pulling his marks up any more, it was going to be dragging them down.

My son revised really well for his A Levels. I’ve never seen him work so hard in my life before. If he could come out with those mocks results on fairly minimal revision, we’re all feeling pretty confident for his A Level results. He would love to get an A (or even A*) in business and a B or C in his other subjects. We will find out for sure in August.

Alongside this, he spent the year as house captain, and was very popular with the younger kids in the year, who just found him funny. He took part in a drama performance, played in rugby and football matches (something he would never have done at his old school) and was named ‘Class clown’ in his yearbook.

Not every parent would be proud of their child for being class clown, but I am. At his old school, he wouldn’t be himself, for fear of judgement from the cool/ naughty/ hard kids. At this school, he has been himself. At times, the teachers may not have always appreciated ‘himself’, but they grew to like him in the end.

And now he is moving on to an apprenticeship, another fantastic achievement for him.