My husband recently gave up caffeine. He has always been a tea drinker, and started drinking coffee when my eldest was a baby. Since then, coffee has been a fundamental part of his life. Every day started with a trip to a coffee shop for him. There would usually be further trips later in the day. Costa, Nero, McDonald’s and Pret – he went to them all (he was never so keen on Starbucks).

I was fine with this, it made him happy and gave him a break from work. I didn’t worry about the cost of it and never really considered the health implications. Personally, I have never drunk coffee or tea, so know nothing of caffeine addiction. This is his story.

I have never felt the urge to do a guest post on the blog before, but I wanted people to hear about my experiences because most people probably have a reliance on caffeine to some extent.

My coffee drinking was habitual. I didn’t have huge amounts, but always at least two or three a day and some days four or five if I had meetings or days out travelling with work.  It was part of my routine on work days and at weekends. With coffee shops with wifi, I was able to work there and it was a nice break from the office. But you’re usually drinking coffee while you’re working.

I was one of those people who think they need coffee before they do any work in the morning. It was almost as though my head cleared and I could focus as I took my first sip of coffee.

A few weeks ago, I had a particularly stressful day at work. I felt the blood pressure rising and decided it wouldn’t be good to drink any more coffee that day. Then I decided I should just have a couple of days off drinking coffee, and I do quite like the challenge and giving up things from time to time.

On day two, I had a headache, but was otherwise feeling pretty normal. But on day three, it started to get bad. I started to feel quite anxious, was over-thinking things and feeling quite negative. This is not like me at all. I was also feeling very tired.

On day four, I felt dreadful. I was consumed with anxiety. I was sleeping a lot in the day and having to lie down. I was also having tremors. I didn’t realise that anxiety could be a symptom of caffeine withdrawal and because I didn’t know this, that made me even more anxious.

Then I googled caffeine withdrawal and was relieved to see lots of articles about the symptoms you could experience. This made me feel less worried, but I still couldn’t control the symptoms and particularly my mindset. One good article I read said it typically goes on for up to nine days, so I knew I was halfway there, but I was also now feeling tempted to have some caffeine to put a stop to it.  Thankfully my willpower was better than that.

Since giving up caffeine, I have realised that there are so many advantages, some that I would never have considered before.

I actually don’t know how much money I am saving from not going to coffee shops, but I notice that the change in my pocket at the start of a week is often there at the end of the week. I never batted an eyelid at paying for it, so that’s a definite upside of giving up.

As a consequence of not drinking coffee, I am now drinking lots of water which I never drank before. On top of the advantages of giving up caffeine, I’m also getting the additional advantages of drinking a lot of water. I’m drinking an average of five pints of day, which feels really good.

I’ve suffered with tight hamstrings while running for over a year. They improved as soon as I gave up coffee, which I don’t think was a coincidence. Because of that, I’ve knocked 50 seconds off a parkrun PB that I didn’t think I could beat.  My skin is better too – a lot of people have commented that I look better for not drinking coffee. My teeth are whiter. I feel more comfortable being in the office and just working, not having that craving for coffee making me want to leave my desk.

I have no regrets at all about giving up caffeine. I have no intention of ever drinking it again, particularly because of how bad it was coming off it, but also because I’ve realised how good life is without it.

I used to go to the coffee shop with my kids at the weekend and that was an important part of our routine. Now I go and have a cup of decaf coffee – that’s the only time in the week when I drink it and although I enjoy the coffee I don’t feel the urge to have another. The rest of the time I drink decaf tea or water – mainly water.

If you’re thinking of giving up caffeine, I strongly recommend it. The only thing I would do differently in hindsight would be to wean myself off gradually rather than going cold turkey.

Have you ever thought about giving up caffeine? 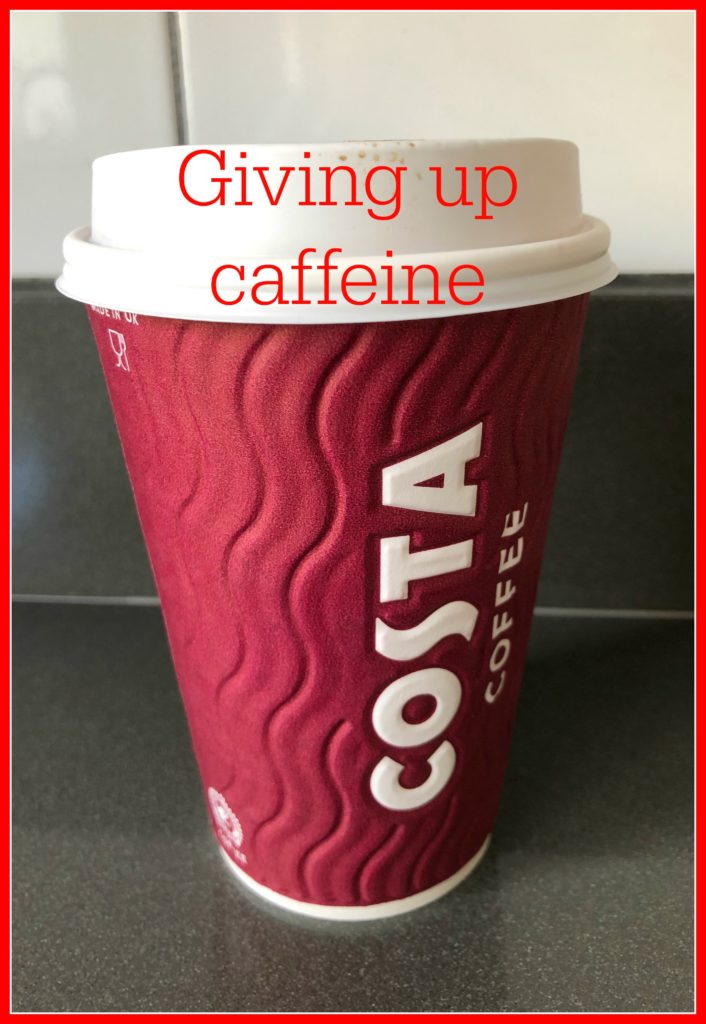