There are plenty of runners out there who run a couple of marathons every year, five or six half marathons and a load of 10ks. I never really got it. Why would you need to do so many races? There’s the training, the cost, the time and the travel to consider…

For many years, I just ran one race a year – usually the Cheltenham half marathon. I’d had a couple of years where I ran a half marathon in spring and another in autumn and I felt it was a bit much. I actually pledged to just run one race a year. I never gave up running in between, I just cut my running down to three or four runs of about four miles a week.

But in 2017, I ran Cheltenham half marathon and thought I might as well run Stroud half marathon three weeks later. Seeing as I was fit. So in 2018, I did the same again. And I ran Tewkesbury half marathon in the spring. I reached a point where I wasn’t letting my training slip back as far between races. I began to run a regular eight miles once a week in addition to my shorter runs, even when I wasn’t training for a race. I started to understand why people run more races every year.

Earlier this year, I ran my first marathon. I trained hard for it and I felt on top of the world. Fit and strong. I couldn’t keep up that level of training all year round, but I didn’t want to let my fitness go too far. I also didn’t want to miss out on Tewkesbury half marathon, so I ran it a week after the marathon. And it gave me almost as much of a buzz as the marathon did.

It was also a nice feeling to run a half marathon and not to feel remotely nervous about it, because my fitness was beyond what it normally is. I normally train well for a half marathon, but I do a couple of 12 mile runs beforehand. Not a 26 mile run.

Next on the agenda was Cheltenham Challenge half marathon, five weeks after Tewkesbury. This was a race I’d equally wanted to do and not wanted to do for a couple of years. It involves a proper big hill and it takes place in June, which means it could be very hot. (I saw some people running it a couple of years ago and it was very hot. It looked horrendous, but I knew I had to do it.) Cheltenham Challenge is what it says it is. It’s not a fast race, it’s supposed to be tough. But it’s a half marathon and a half marathon, however hilly, is never going to be as tough as a marathon, is it? (Spoiler alert – it nearly was! But it was so much fun.)

In the autumn, I will be doing Cheltenham and Stroud half marathons as usual. If anything else crops up between now and then, I may well run those too.

Nearly a quarter of a century after my first half marathon (really!), I finally understand the addiction to races. 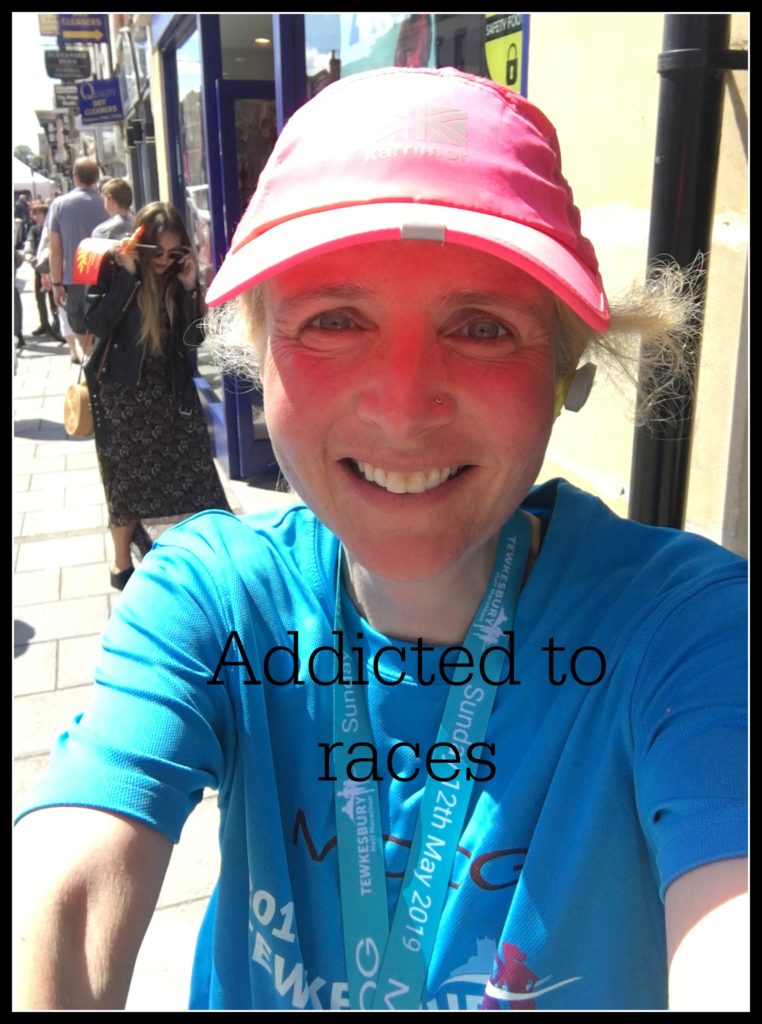