Christmas Eve – do we have any traditions at all?

Home » Family » Christmas Eve – do we have any traditions at all?

Going back to when the kids were younger, we had a traditional Christmas Eve. We would go on the steam train to see Father Christmas with my parents and sister and brother-in-law, just after lunch. In the evening, either we or my parents would lay on Christmas Eve tea for everyone (whichever of us wasn’t doing Christmas dinner). While tea was being prepared, whoever wasn’t needed for food preparation would go to the church for the crib service.

But then things changed. The kids got too old for the Santa train and, although deep down they would have probably liked to go on it with their cousins, it was rather expensive when the magic was no longer there. Plus, we were forking out for a huge number of panto tickets. Panto was the other thing that happened. Theoretically, my daughter should have had a 50/50 chance of performing on Christmas Eve, but for the three years she did panto, she always performed on Christmas Eve.

Suddenly, we had no traditions at all.

I wanted some Christmas Eve traditions!

In the end, we actually went out for lunch on Christmas Eve and it was lovely. Normally if we go out for lunch, it’s to somewhere like Pret, but we had a proper sit down meal at Bella Italia. We were lucky to get in – the place was full of big family groups enjoying their own Christmas Eve traditions. I hope going out for lunch might become a tradition in future.

We went for a family walk in the afternoon, but I wouldn’t call that a tradition, as we always go for walks together.

My daughter said the word ‘tradition’ a few times, about something tenuous. And my young son shouted at her: ‘Can we just stop saying tradition? It’s not a tradition! Why does everything have to be a tradition?’.

Arguments are a tradition in every family, right?

We had our traditional Christmas tea, and my niece and nephew went bonkers, as is tradition. My nephew spent approximately an hour beating my two boys up with cushions and, surprisingly, nobody got hurt. Although, my husband banned my eldest from hitting his brother round the head with a cushion, in the light of his concussion.

One Christmas Eve tradition does remain from childhood – the kids always have to sit on their sacks in their pyjamas for a photo before they go to bed. The boys were surprisingly co-operative this year about putting their pyjamas on at 8.30pm (my eldest doesn’t even really wear pyjamas, but we didn’t want a photo of him in his pants.)

Do you have many Christmas or Christmas Eve traditions? And do they change over time? 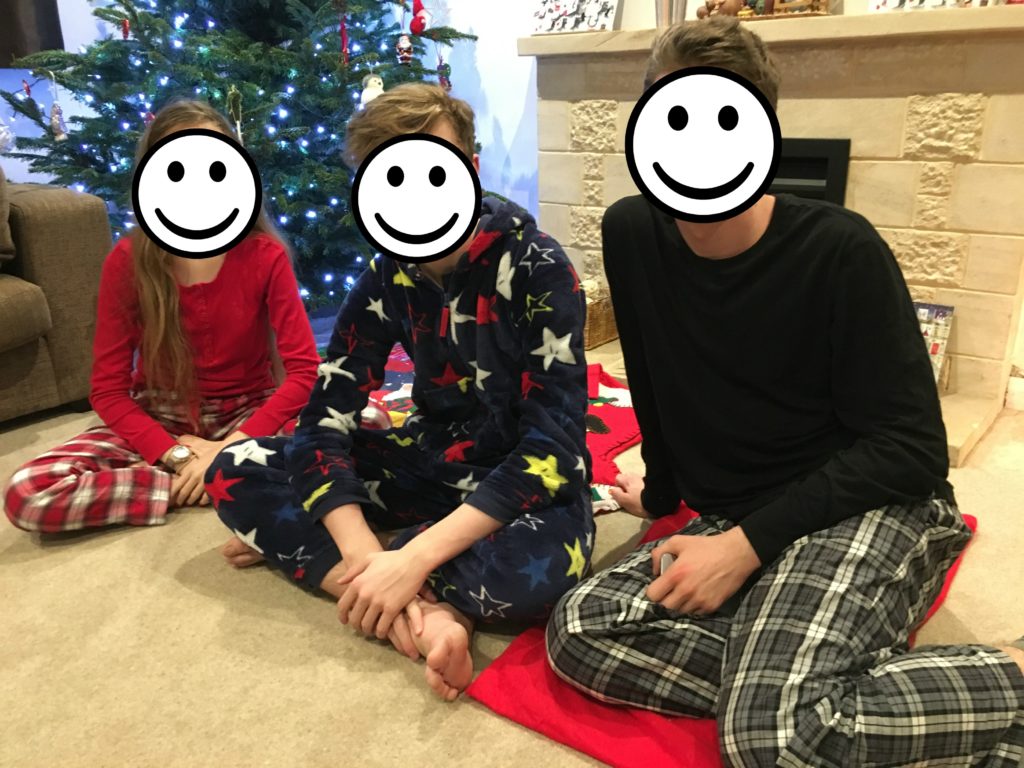